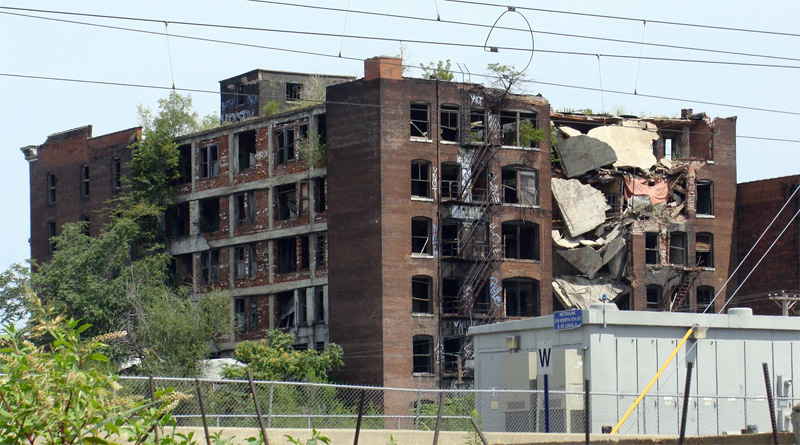 If you are a white person with a brain and live in St. Louis County, you should fight the merger of St. Louis City and County with every resource you can muster. Your livelihood and your savings depend on it, because St. Louis City is where tax revenues and Rule of Law go to die.

They need your housing stock because they’ve destroyed their own through arson, vandalism, incompetence and neglect and — like the Mad Hatter’s Tea Party – must constantly move on to exploit new opportunities.

City residents are champing at the bit to trade their voluminous black criminal element for St. Louis County tax revenues. Black crime and its costs have driven many whites from the city because they bear a disproportionate share of the inevitable tax burden. There are so many shiftless black criminals in St. Louis –- who sit around waiting for their Baby-momma’s checks – that they have become an unsupportable burden to white taxpayers.

Blacks also want your schools: They’ve destroyed the St. Louis Public Schools through desegregation, graft, corruption and incompetence, and ruined what once may have been the best large, public school system in the U.S. They’ve nearly succeeded in driving the last white kid from the system, as I predicted they would 30 years ago.

It is no coincidence that many of the people advocating the city and county merger are the same liars, criminals, and morons who urged the $7 Billion Desegregation Program that was the coup d’état for the St. Louis Public Schools, and which heralded the end of St. Louis City as a viable urban center.

Ubiquitous black voter fraud and white flight have left St. Louis with ONE white city-wide elected official, the city’s Mayor. Her chances of reelection are equivalent to my own chances of succeeding Queen Elizabeth II to the British Throne.

Of course, St. Louis Mayor Krewson has done little but pander to blacks for 30 years, so she will finally get to experience the full consequences of her own race betrayals. She is desperate for the merger, because she holds out hope that it will save her vanishing political ambitions.

The city of St. Louis is as hopelessly lost as Detroit, Newark, Cleveland, East St. Louis, New Orleans, Baltimore or anywhere else black majorities have succeeded in destroying what were once considered “the gems of our civilization.” They can’t help it because Third World instincts dominate everything they do and are all they will ever understand.

The best that Missouri voters can do is make certain that that they successfully “quarantine” the evils that have destroyed St. Louis City, and prevent them from spreading to St. Louis County or surrounding counties.

In particular, County voters must face the issue honestly because their futures depend on it: They must not allow themselves to be intimidated into doing the bidding of their mortal enemies just to dodge hollow epithets such as the word “racist.”

(Mr. Holt is a former Member of the St. Louis School Board’s anti-busing coalition, and the National President of the Council of Conservative Citizens.)