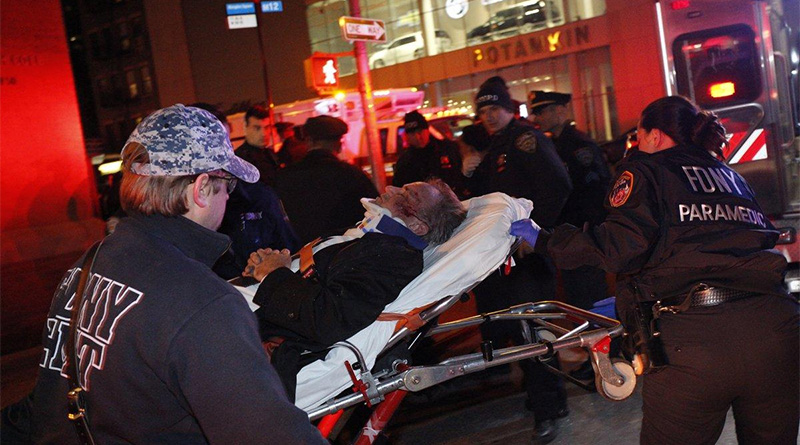 Violence erupted outside an alt-right gala, The Night For Freedom with Mike Cernovich celebrating Trump’s one year in office, in Midtown Saturday when a black-clad protester punched and choked a partygoer, cops said.

Far-right provocateur Mike Cernovich was inside the event at the FREQNYC nightclub on W. 50th St. when the fisticuffs broke out about 10:30 p.m.

Cops arrested the 30-year-old assailant, and the 56-year-old victim was taken to Bellevue Hospital in stable condition, police said.

Cernovich later emerged from the event and confronted a group of demonstrators.

The Night for Freedom event — billed as a “gathering of patriots and political dissidents who are bored with mainstream political events” — featured a comedy routine, speeches and a deejay set.

Perhaps the most surprising guest at the event was Chelsea Manning, the transgender former Army private convicted of the largest leak of classified documents in American history.

It was not clear why Manning, who was planning to run for a Maryland Senate seat as a Democrat, attended the conservative gala.

Several guests walked past a phalanx of demonstrators on their way into the event, sparking shouting matches.

A group of partygoers later turned the tables, flashing middle fingers and throwing cups of beer at the protesters.

Cops intervened before the confrontation escalated.

Several masked demonstrators faced off with NYPD cops massed outside the club.

One attendee, 65-year-old Bob Sackel, said he didn’t understand why the protesters felt the need to disrupt the gathering of people celebrating President Trump’s first year in office.

“What is there that you wanna spend your time protesting?” asked Sackel, of Plainview, L.I.

“I just don’t understand it.”