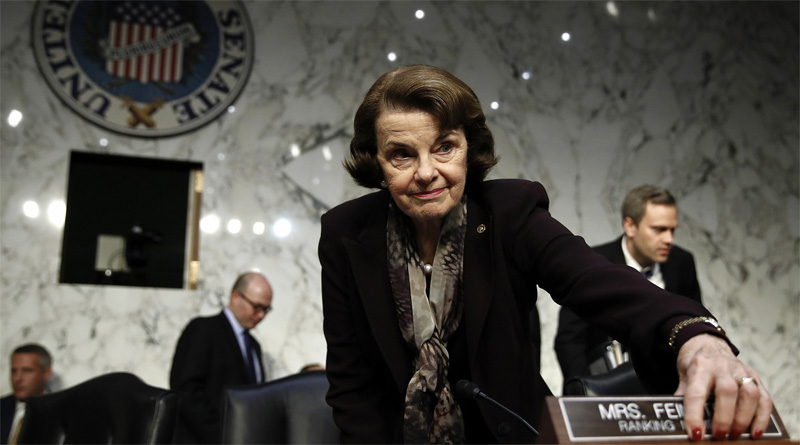 Marxist Jews are capable of anything, as Senator Diane Feinstein’s most recent and scurrilous accusations against Judge Brett Kavanaugh prove beyond any doubt. They are truly “The Seed of Satan.”

This piece of unclean Jewish pork alleges she has evidence of a “sexual indiscretion” on the part of Judge Kavanaugh, an incident supposedly dating back 38 years when he was in HIGH SCHOOL! Of course, as scheming Jews always do, the identity of her “source” remains anonymous, just as the allegations remain murky and suspect.

It sounds like the New Communist Party (often mistakenly referred to as “Democrats”) have returned to the old playbook they used when attempting to destroy Clarence Thomas during his 1991 Confirmation Hearings. Their Jewish lies won’t work against Judge Brett Kavanaugh any more than they worked against Judge Clarence Thomas, because most intelligent people are wise to them by now

Feinstein is a particularly verminous example of this species, even when compared to the lying and scheming “Democrat” trash on the Jewdiciary Committee. Ever since California’s Democrat Central Committee endorsed her “Democrat” opponent, she has been desperately seeking some gimmick for her November Senate Election, and she may have concluded these recent allegations serve her purpose.

Any white person, Republican, conservative, heterosexual, law-abider or nationalist who votes for a Jew –- any Jew –- for public office is helping to destroy themselves and their race. After all, it is not Christians who are engaged in a cabal against President Trump and his appointees, it is the Jews who are the instigators.

Make no mistake about it: Marxist Jews and their black, communist and “feminist” surrogates want to destroy all white Christians, as well as the Constitution they resent and have always worked to subvert. They are our enemy just as surely as Satan, himself!

3 thoughts on “The Seed of Satan”