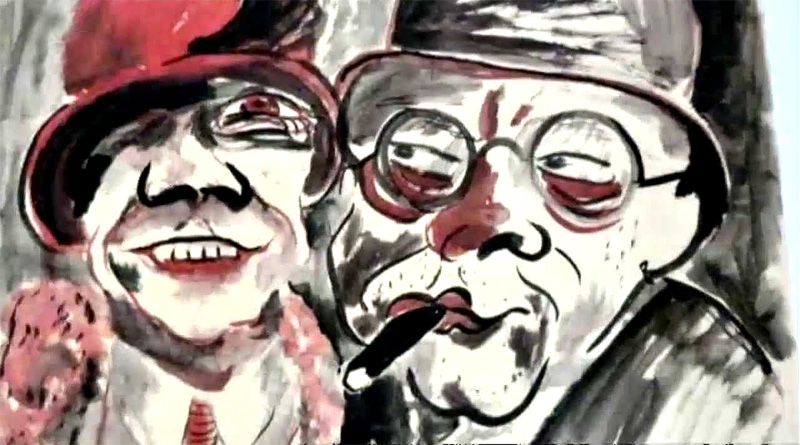 Manhattan’s House of Horrors — commonly referred to as the Museum of Modern Art — recently received a $100 million donation from a billionaire art collector to help fund a $400 million renovation project. Another misguided Jewish mogul contributed $50 million towards the same endeavor.

It leaves one dispirited and dejected just think of the benefits their $150 million-dollar contributions could have accomplished for truly worthy causes. These wealthy individuals could have made a real difference in the lives of handicapped children at Shriner’s Hospital for Children, or St. Jude Children’s Research Hospital.

What sickness or evil motivates the promotion of indecipherable degeneracy as “art,” over truly ennobling and life-enhancing cultural enrichment?

Ultra-rich leftists, globalists and culture destroyers — like the Rockefellers, Rothschilds, and Soroses — seek to replace true artistic expression with neurotic garbage to distort and pervert the appreciation and understanding of truth and beauty. This is done to eliminate cultural standards, and confuse and madden the masses into accepting anything that comes down the pike from our self-anointed “leaders.”

These emotionally sick people seek to create a mass psychosis where everything unnatural is tolerated and promoted, while absolutes are absent and where the childish efforts of poseurs are celebrated as “genius.“

Modern art has followed the same path as modern education, music, and social “science” by contributing to confusion and perversion, rather than enlightenment. Fashioned by the usual suspects, the ever-changing dictates of “public opinion” rule the roost.

In the final analysis, a people whose cultural standards are so low that they can no longer distinguish truth and beauty from falsehood and ugliness, are a people ripe for all manner of deception, oppression, and enslavement.

For some reason, our wealthy elite believe we’ve got to keep all those “artistes” employed –- the ones with no talent — who churn out childish and scurrilous “art” so they can party all night and sleep all day, and never have to sell-out their faux “Revolution.” This allows them to keep generating the kind of garbage that no one in their right mind would want to purchase.

Likewise, graffiti, that could be best characterized as “ghetto art,” — adorning the facades of abandoned buildings and warehouses –- is often the subject of adoring articles in the liberal media. There is an almost uninterrupted blight of such huge and weird “art” displays running for miles along the METRO’s “Red Line” corridor into Washington, D.C.

Maybe we need grants for “midnight art,” like Slick Willy used to fund “Midnight Basketball”: It can’t be any less culturally enriching than the Museum of Modern Art, and it might keep the “youths” diverted from seamier activities”.