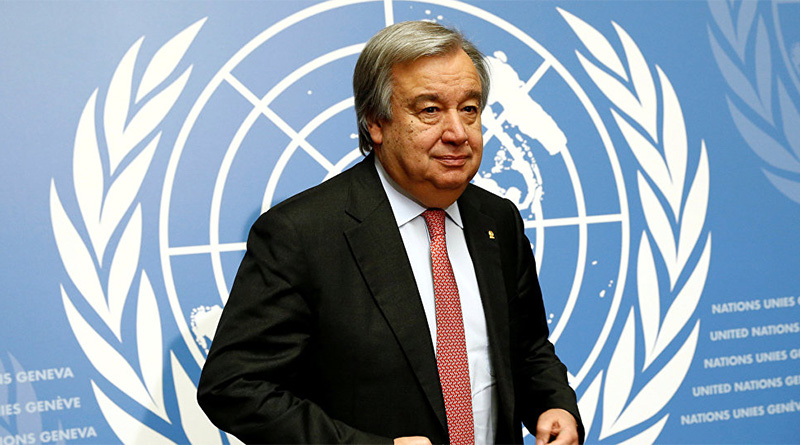 This should make steam escape from your ears.

The UN’s new Secretary General, who has been in office all of 14 days, is unveiling his plan to promote global mass migration. Not kidding!

SecGen Antonio Guterres, former Prime Minister of Portugal from the Socialist Party, intends to jam his globalist/socialist agenda down your throat, whether you like it or not.

I may not know President Trump very well, but I do know that he and Ambassador Haley will never sign on to such a steaming pile of stupidity.

Tell you what, Antonio, let’s test your plan in an incubator. Let’s redirect all of the migrants who are currently invading European countries to Portugal. Portugal gets them all. Let’s build a wall around Portugal so they can’t get out and infect neighboring countries.

Let’s allow the experiment two full years to mature. You get no financial help from the UN or any other country. You are on your own.

Millions of these productive, wonderful, decent citizens of earth flooding into Portugal every month for the next two years. After two years, let us know how it is working out, you fucking moron!

Do I sound bitter?

Guterres, a former Socialist Party prime minister in his native Portugal, took over the top job at the UN on January 1st, having previously served as the institution’s High Commissioner for Refugees.

His article, titled ‘Migration can benefit the world. This is how we at the UN plan to help’, makes the bold claim that mass migration “powers economic growth, reduces inequalities and connects diverse societies”, in order to promote the Global Compact for Migration.

“This will be the first overarching international agreement of its kind,” he boasted — but claimed it would not “place any binding obligations on states”, but rather serve as “an unprecedented opportunity for leaders to counter the pernicious myths surrounding migrants”.

These assurances have failed to convince the Donald Trump administration in the United States, with the White House rejected it as “simply not compatible with US sovereignty”, and President Trump summarising it as “no borders, everyone can come in!” Prime Minister Theresa May’s government in the United Kingdom has not pulled out, however — apparently unconcerned by its implications.

Straight up lie! If migration were such a boon to the economies of the countries the migrants invade, then the economies would be booming in the shitholes they left. They import poverty, crime, disease, and dependence. It is time to flush the stupid UN from the United States!
— Powdered Wig Society (@Patreeit) January 14, 2018

Guterres said it was crucial to “recognise and reinforce the benefits of migration … Migrants make huge contributions to both their host countries and countries of origin.”

He made the contentious claim that migrants “take jobs” that local workers “cannot” fill, and asserted that this is a positive thing. He also attempted to spin the fact that migrants send huge sums of money straight out of their host countries and back to their countries of origin as a kind of supplement to foreign aid.

The new secretary general is not the first senior UN figure to extoll the supposed benefits of mass migration. The intergovernmental institution has promoted it as “inevitable, necessary, and desirable” through its #ForMigration campaign for some time.

Former UN Special Representative for Migration Peter Sutherland, a heavyweight globalist who was a key player on a host of other global bodies and multinational corporations as well, was one its most prominent mass migration advocates before he passed away earlier this month.

In 2012, he infamously remarked that the European Union — which he had previously served as a European Commissioner — should be doing its best to “undermine national homogeneity” and promote “multicultural states” through mass migration.

[EDITOR: Europe is one of the most multicultural continents in the world identifiable by language and culture. There are Poles, Danes, Germans, Italians, British, Irish, etc. “Culture” is not the motive. The issue is race and homogeneity — multiracialism disguised as one-way “multiculturalism”. Europeans are being hoodwinked. Why isn’t China multiculturalised for example? Why aren’t airplanes “hijacked” to Haiti or Zimbabwe?]