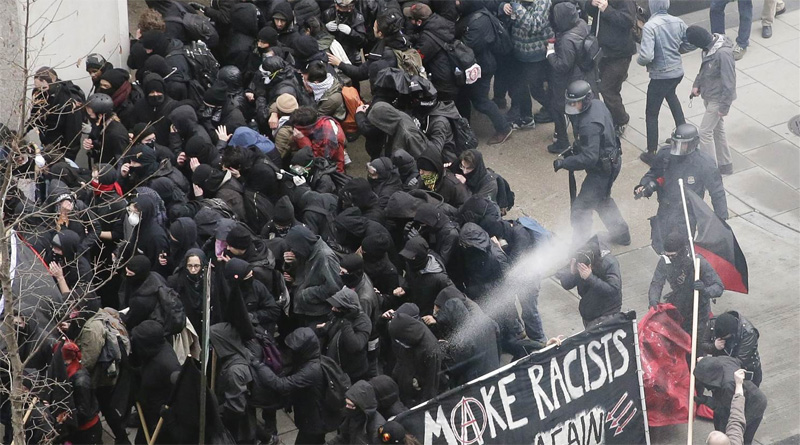 Thousands of protesters took to the streets of D.C. and launched a violent rampage just blocks away from the White House smashing store windows, setting fire to cars and throwing bricks at the police.

There are 230 rioters arrested after violent protests erupted in D.C. following Trump’s inauguration and will be charged with felony rioting.

The charge carries a punishment of up to ten years in jail and a $25,000 fine.

More than 95 people have been arrested so far during the riots. Hundreds of protesters dressed in black marched through the streets of D.C. breaking windows and hurling projectiles.

A Washington D.C. Metro Police Officer arrests an anti-Trump protester, after a confrontation that led to several dozen protesters being cornered and then arrested for vandalism.

A young male rioter kicked in a car’s windshield as fellow protesters watched on.

Many of those arrested are due to appear in court on Saturday, according to WUSA 9.

Heated clashes broke out in McPherson Square and along K Street as hundreds of riot police fired tear gas and drew their nightsticks to contain the masked mob.

As the rioting unfolded, Trump and his family were arriving at a review stand at the White House to see the end of the inaugural parade.

Militant anti-Trump protesters gave a foretaste of what could follow during the violent outbreaks, which has so far seen 217 people arrested and at least six police officers injured.

Just before the parade started, clashes broke out between more than 400 stone-throwing protesters and riot police in McPherson Square – just blocks from the parade in honor of newly sworn-in president.

As Trump’s motorcade wound its way up Pennsylvania Avenue in the parade to the White House, protesters also descended on Franklin Square Park where they graffitied a stretch limo before setting the vehicle ablaze right outside the Washington Post building.

‘Groups of people started gathering around the limo. There was a sense of something going to happen. People were shouting ‘it’s going to blow’. We tried to move them back,’ DailyMail.com columnist Katie Hopkins, who witnessed the ordeal, said.

‘The inauguration parade for the president is just blocks away from where all this is happening.’