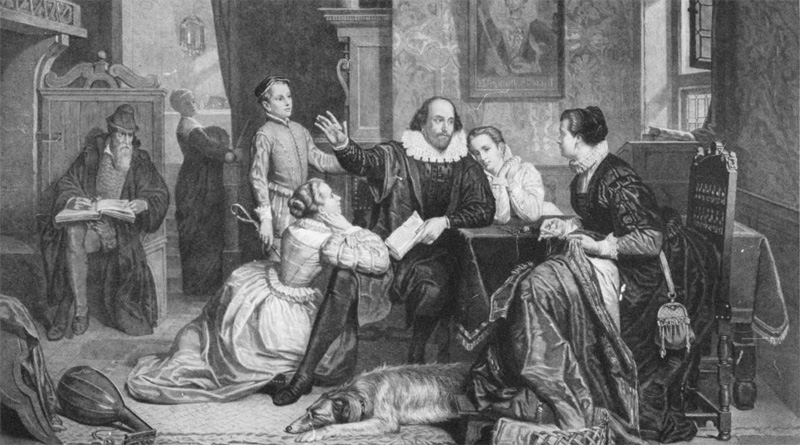 © Earl P. Holt III — Anyone needing further evidence that our institutions of “higher learning” are generating Marxists, illiterates and dolts need only look at a recent student petition submitted to the Yale Faculty demanding the removal of Shakespeare from much of its curriculum.

This student petition parrots the usual complaints of too many “dead white males” in its course on “Major English Poets,” and demands their removal in favor of more authors who are nigro, queer or some alternative but acceptable form of semi-literate poseur.

The fact that Shakespeare is the greatest and most widely-quoted author in the history of literature carries no weight with these intellectual Bolsheviks, as confident in their erudition as they are in their own moral superiority.

Here is why Shakespeare, in particular, should remain in the Yale curriculum, no matter how dumbed-down the latter has become in order to accommodate “persons of color,” whose value to Yale might be better served on its janitorial staff.

There are two keys to understanding Shakespearean Tragedy. The first is found in Julius Caesar, in the pithy remark that Caesar makes to Brutus in Act I, Scene 2: “The fault, dear Brutus, is not in our stars but in ourselves that we are underlings.”

The second requires readers to recognize that in each of his Tragedies, Shakespeare has resurrected the formula of the greatest of ancient Greek Tragedians – Euripides, Aeschylus and Sophocles — so that the Principal Character (or “Protagonist”) is undone by virtue of some innate Tragic Flaw, which leads inevitably to his own destruction.

Aristotle described this formula in his “Poetics,” one which necessarily involved a man of High Estate (“better than we,”) who suffers an unanticipated and profound Reversal of Fortune, which is ultimately revealed to be the result of this Tragic Flaw he possessed.

In borrowing this formula, Shakespeare has adopted many of the Ancient Greek techniques of plot: The single deviation being that the fatal flaw illustrated by the Ancient Greeks was almost always “hubris” (or pride,) which displeased the Gods enough to set in motion the events or conditions that eventually destroyed these powerful mortals.

On the other hand, being an early product of the Enlightenment, Shakespeare discarded the interference of the Gods in effectuating the demise of his Tragic Figures, thereby acknowledging the role of Free Will in their self-destruction.

That Shakespeare’s Tragic Figures are destroyed by mistakes and errors they, themselves make — rather than being undone at the hands of angry and capricious Gods — is clearly and unmistakably reflected in Caesar’s comment to Brutus, recited above.

Othello, Macbeth, King Lear and Hamlet are generally recognized as the “quartet” of Shakespearean Tragedies, although there are many others that fit the formula, as will be discussed later.

Each of these Tragic Figures is considered to be a great and powerful man, but each is undone by his one Tragic Flaw, which inevitably manifests in his own destruction.

Interestingly, King Lear is the only one of the four in whom the inherent Tragic Flaw is Hubris, like that found in the ancient Greek Tragic Figures.

Wishing to retire his crown, Lear decides to divide his kingdom among his three daughters, based on their declarations of love for him. The two older daughters pander to him and engage in excessive and insincere declarations of devotion, while the youngest (Cordelia) is more reserved, and merely states that she “loves him as a daughter should.”

Based on these declarations, Lear divides his kingdom between the two oldest daughters, while excluding the youngest. His rash and prideful decision eventually leads to the loss of his kingdom, as well as the deaths of all three daughters and himself.

Macbeth’s fatal flaw is Blind Ambition, which prompts him to murder his King and the head of his Clan in order to usurp the throne of Scotland. He in turn is destroyed by those loyal to the murdered King Duncan.

Hamlet’s fatal flaw is Indecision, which is captured in his famous soliloquy: “To be or not to be: That is the question. Whether ‘tis nobler in the mind to suffer the slings and arrows of outrageous fortune, or to take arms against a sea of troubles…”

While Hamlet is a sympathetic and noble character in many regards, few men would experience indecision over what course of action to take if their father had been murdered, and their mother taken as a bride by their father’s murderer. (The proper course of action would be even more apparent if the ghost of one’s murdered father were to appear to him, demanding revenge for his own “murder most foul.”)

The fourth of the traditional Shakespearean Tragedies is the Venetian Army General, Othello, who is consumed by Jealousy, his own Tragic Flaw.

Foolishly listening to Iago, his disloyal subordinate, Othello believes Iago’s lies about his wife’s infidelity, causing Othello to slay her in a fit of rage. When Othello eventually learns of his wife’s faithfulness, he kills himself.

Many other works of Shakespeare demonstrate his adaptation of this formula of the Ancient Greek Tragedians, including Richard III, Romeo and Juliet, and Julius Caesar.

Richard III betrays England and the House of York multiple times in pursuit of the Throne of England, but such Disloyalty generates contempt and disloyalty within his own army, which abandons him at the Battle of Bosworth, where he is killed for want of a means of escape after losing his horse. (“A horse, a horse, my KINGDOM for a horse…!”)

The central character in Julius Caesar is not Caesar, himself, but Brutus, who helped others assassinate his dearest friend Caesar, ostensibly out of fear that Caesar aspired to become king, thereby threatening the future of the Roman Republic.

Brutus’ fatal flaw is Hubris, which made him vulnerable to the flattery of peers with less honorable motives, permitting them to successfully recruit him for Caesar’s assassination, while knowing it was both wrong and evil, and for which there was little justification.

Even Romeo and Juliet fits this formula: The families of these two star-crossed lovers are so embroiled in their vendetta against each other, that their Vengefulness ultimately leads to the tragic deaths of both Romeo and Juliette, the very flowers and futures of their respective families.

Most English Literature courses requiring Shakespeare focus on the endless details of his varied and intricate plots: Often, there is little consideration given to understanding the deeper and more profound historical context in which Shakespeare’s genius united the classic elements of Greek and Medieval Tragedy.

This is unfortunate, and helps fuel the conspiracy promoted by many Cultural Marxists — among other truly ignorant and hopelessly stupid individuals — who regularly conspire to remove Shakespeare from many high school and college curricula.

Not only are these ignoramuses oblivious to much of the above, but many are also motivated by a seemingly endless desire to “water-down” the curriculum, so that even dolts might successfully matriculate.

Their brilliant “solution” is to exclude the works of Shakespeare, arguably, the greatest literature in the history of man’s efforts to put ink to paper.

(This article first appeared in the September, 2016 CITIZENS INFORMER.)