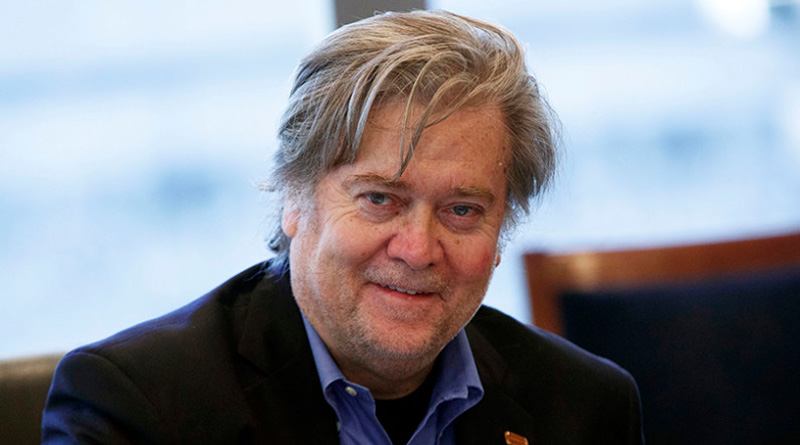 ‘Fascism’ is just a ‘smear’ used by the media to discredit ‘populism’, Steve Bannon has said in a wide-ranging interview in the Spectator.

Bannon – former senior advisor to President Trump and former Executive Chairman of Breitbart News – was talking to interviewer Nick Farrell, who asked him what he thought of claims that “populism is the new fascism.”

‘This is all theoretical bullshit. I don’t know. Populism, fascism — who cares? It’s a media smear of the populist movement.’

Donald Trump, I suggest, can’t be a fascist, as he does not want to replace democracy with dictatorship, nor is he left-wing, as was fascism.

‘The bigger threat we have got than socialism is state-controlled capitalism, which is where we’re headed, where we have big government and a handful of big companies. That’s what you’re seeing in technology right now with these massive companies. It’s the biggest danger we have.

Interviewer and interviewee were brought together by a shared interest in Mussolini. Neither shares his politics but they both find the Italian dictator “fascinating.”

Mussolini was perhaps the reason Bannon granted me an interview. It turns out he likes a book I wrote about the dictator years ago.

‘How many guys have you interviewed who have read your biography?’ he asked. ‘Am I the first?’

Had he really read it? ‘I have, definitely … I haven’t read all the old biographies but it’s the only modern one that treated Mussolini as … one of the most important figures of the 20th century. You put the juice back in Mussolini. He was clearly loved by women. He was a guy’s guy. He has all that virility. He also had amazing fashion sense, right, that whole thing with the uniforms. I’m fascinated by Mussolini.’

Bannon was speaking to Farrell on his European tour, where he has been speaking at a series of sell-out events and reporting on the recent Italian elections which Bannon described as “the most important thing happening politically in the world right now”.

As if to prove him right, the Italians duly voted in huge numbers for populists, in particular for the Five Star Movement (M5S) which got 33 per cent, and its opponents Matteo Salvini’s La Lega, which got 18 per cent.

Bannon defines Silvio Berlusconi’s Forza Italia (La Lega’s main ally in the Coalition of the Right), which won 14 per cent, as populist in order to claim that ‘two thirds’ of Italians voted for populist parties and to demonstrate that populism in Europe is on a roll. Or as Bannon told his Zurich audience, ‘The populist surge is not over: it’s just beginning.’

Bannon was not done on fascism…

That’s quite a highbrow allusion, I say: isn’t citing Roman history way above every-one’s heads? ‘Why? No, you see here’s the problem. You want to talk down. This is what’s happening to us. I want to raise the bar and get back to classical allusions because I come from a blue-collar family that reads Plutarch.’

He goes on: ‘Lincoln had the King James Bible, Plutarch’s Lives of the Noble Greeks and Romans and the plays of Shakespeare, that’s all he had, that’s what he read non-stop. He didn’t go to 20 years of school, he didn’t have a PhD in English. In the height of our civilisation, in England and other places, working men had reading associations. Churchill could make classical allusions and the Labour vote knew exactly what he was talking about. We’re not going to dumb it down, OK? I’m not going to let you dumb it down.’