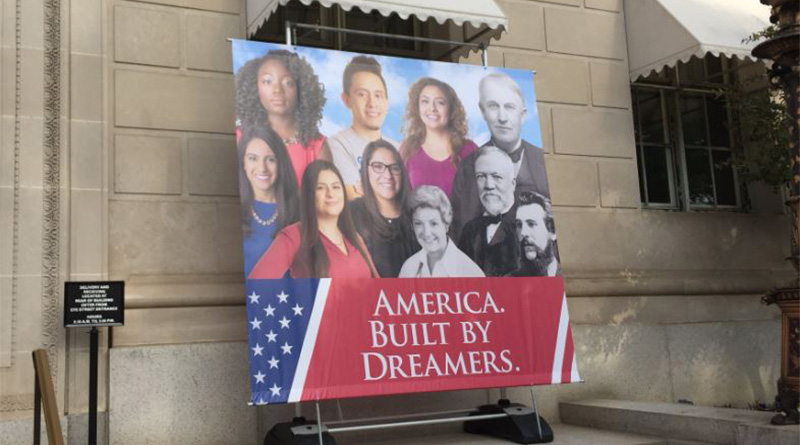 The U.S. Chamber of Commerce has posted two billboards in front of the White House which declare America was built by foreign ‘Dreamers,’ not by native-born Americans, who apparently have no place in the billboards or in America’s society.
“It is absolutely an insult to Americans, but the Chamber knows that, which is why this isn’t a broad-based campaign” conducted outside Washington D.C., said Mark Krikorian, director at the Center for Immigration Studies. He continued:

Don’t American kids have dreams? [Silicon valley creators] David Packard and Bill Hewlett were not immigrants. Bill Gates wasn’t an immigrant. Tom Watson [founder] of IBM wasn’t an immigrant. Obviously immigration is an important part of America’s story, but it is just one part.

America is not a “nation of immigrants,” Krikorian said, it is “a nation which includes immigrants.”

The Chamber’s use of ‘dreamers’ to refer to migrants, and the deliberate erasure of 290 million Americans from their own nation and history was posted as business leaders arrived in town November 15 to demand that Congress provide a no-strings amnesty for at least 3 million illegal immigrants, plus million of their foreign relatives, no matter the financial and civic cost to American families and American voters.

About to speak about IBM #Dreamers at press event at @USChamber #DACA pic.twitter.com/7g2JzGCyBt

However, any infusion of new immigrants provides Chamber companies with millions of extra workers to lower wages rates. The immigrants also serve the Chamber as millions of government-dependent customers. For example, Breitbart News estimated that an amnesty for 3 million ‘dreamers’ would require taxpayers to provide $115 billion subsidies via Obamacare to myriad health-care companies.

In practice, the taxpayers’ costs will be far higher because new immigrants can use the nation’s chain-migration law to being in many of their foreign relatives, regardless of their skills, ideology, age or health. For example, the National Academy of Sciences reported in September 2016 that legal and illegal immigrants cost state and local taxpayers $57 billion per year, not counting huge additional federal costs. The same report shows that immigration forces down Americans’ wages down by 5.2 percent, and annually transfers $500 billion in payroll up to employers and investors.

That is all gravy to business groups, which gain from a larger population and national economy, especially if there is no growth in employees’ per-capita salaries.

The fuss over the DACA amnesty, however, is intended to draw attention from a more important fight. Business groups are using the demand for a DACA amnesty to distract media and congressional attention from President Donald Trump’s popular, pro-employee immigration principles. If Trump signs a congressional no-strings amnesty for the DACA recipients, he will have abandoned his election-winning immigration principles.

That strategic defeat will allow lobbyists to push Congress to next raise the supply of young white-collar visa workers — such as H-1B workers, OPT graduates and L-1 visa workers — who can help lower salaries for middle-aged American tech workers and of legal immigrants. Any increase in the white-collar labor supply is likely to reduce labor costs, freeing up revenues to spike profits and investors’ returns.

The chamber’s leaders use the DACA dispute to “virtue-signal and to curry favor with Democrats…. they want to us DACA as an excuse to bootstrap an amnesty for all of the so-called’ dreamers’ without talking about [offsets and safeguards, such as] chain migration or the visa lottery or E-Verify.”

Top Democratic leaders also describe illegal immigrants as better than American voters or their children. “Our Dreamers, they make America dream again,” Rep. Nancy Pelosi exclaimed in October. “They’re so lovely and we, frankly, owe a debt to your parents for bringing you here to be such a brilliant part of our future.”

Illegal immigrants also claim that they are essential to the economy. Many demonstrations include signs declaring that migrants — not Americans — keep the economy working

Industry-skewed “nation of immigrants” polls show that Americans want to welcome migrants. But “fairness” polls show that voters put a much higher priority on helping their families, neighbors, and fellow nationals get decent jobs in a high-tech, high-immigration, low-wage economy. That political power of that higher priority was made clear in November 2016 when Americans put Trump in the White House.

The billboard was endorsed by the FWD.us group of investors, whose founders include Facebook’s Mark Zuckerberg.

We stand with @IBMpolicy @FWD_us and American #Dreamers to demand that Congress enact legislation protecting #DACA recipients prior to the year’s end pic.twitter.com/WReaDKZSBm

Four million Americans turn 18 each year and begin looking for good jobs in the free market.

But the federal government inflates the supply of new labor by annually accepting 1 million new legal immigrants, by providing almost 2 million work-permits to foreigners, by providing work-visas to roughly 500,000 temporary workers and doing little to block the employment of roughly 8 million illegal immigrants.

The Washington-imposed economic policy of mass-immigration floods the market with foreign labor and spikes profits and Wall Street values by cutting salaries for manual and skilled labor offered by blue-collar and white-collar employees. It also drives up real estate prices, widens wealth-gaps, reduces high-tech investment, increases state and local tax burdens, hurts kids’ schools and college education, pushes Americans away from high-tech careers, and sidelines at least 5 million marginalized Americans and their families, including many who are now struggling with opioid addictions.

The cheap-labor policy has also reduced investment and job creation in many interior states because the coastal cities have a surplus of imported labor. For example, almost 27 percent of zip codes in Missouri had fewer jobs or businesses in 2015 than in 2000, according to a new report by the Economic Innovation Group. In Kansas, almost 29 percent of zip codes had fewer jobs and businesses in 2015 compared to 2000, which was a two-decade period of massive cheap-labor immigration.

2 thoughts on “The U.S. Chamber of Commerce Billboards: ‘Dreamers’ Make America, Americans Have No Role”