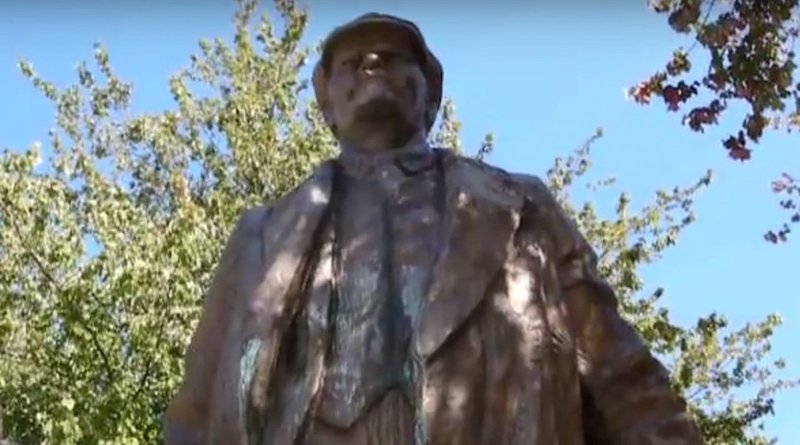 A small group of protesters — several wearing “Make America Great Again” caps from Republican President Donald Trump’s campaign — marched around a statue of Vladimir Lenin in Seattle on Wednesday and demanded its removal.

A day later, Democratic Mayor Ed Murray agreed the statue of the brutal Soviet dictator should be taken down, KCPQ-TV reported. According to MyNorthwest.com, he made an official request for its removal.

“I have had a position on that for years, because Fremont sits in my old legislative district,” Murray told the station. “That monument represents to many people in this city their families having been murdered, the destruction of tens of millions of people.”

The protesters — led by pro-Trump figure Jack Posobiec — were looking to shine a light on Lenin’s murderous history, KCPQ noted in an earlier piece. Indeed the statue is often doused with red paint as a symbol of Lenin’s atrocities, the station said.

In addition, the protesters also called out the alleged hypocrisy of those who want Confederate statues down but are apparently fine with Lenin’s statue, KCPQ noted.

Posobiec’s video of the tiny protest was viewed more than 50,000 times, the station said.

In the last few days, Seattleites have expressed concerns and frustration over symbols of hate, racism and violence that exist in our city. Not only do these kinds of symbols represent historic injustices, their existence causes pain among those who themselves or whose family members have been impacted by these atrocities. We should remove all these symbols, no matter what political affiliation may have been assigned to them in the decades since they were erected. This includes both Confederate memorials and statues idolizing the founder of the authoritarian Soviet regime. Both are on private property, but I believe the Confederate memorial at Lake View Cemetery and the Lenin statue in Fremont should be removed. We should never forget our history, but we also should not idolize figures who have committed violent atrocities and sought to divide us based on who we are or where we came from.

“I think it’s time for these things to go,” Murry told the station. “They don’t represent the best of who we are.”

While the Lenin statue and the Confederate memorial are on private land and privately owned, the mayor said the case for their removal must still be made.

“We can’t tell the private property owner what to do,” Murray told KCPQ. “But we can say we think this isn’t a good message to the city.”

An American military veteran and teacher spotted the sculpture in an Eastern European scrap yard 1989, and mortgaged his house to bring the sculpture to Issaquah. The teacher recognized the statue as a piece of art, regardless of its subject.

The statue is now owned by the teacher’s family, and it sits at the “temporary viewing” site in Fremont while it’s for sale for $250,000.

According to Fremont.com, the presence of the sculpture is supposed to illicit a wide range of responses as a piece of art.

Here’s a clip of the protest: