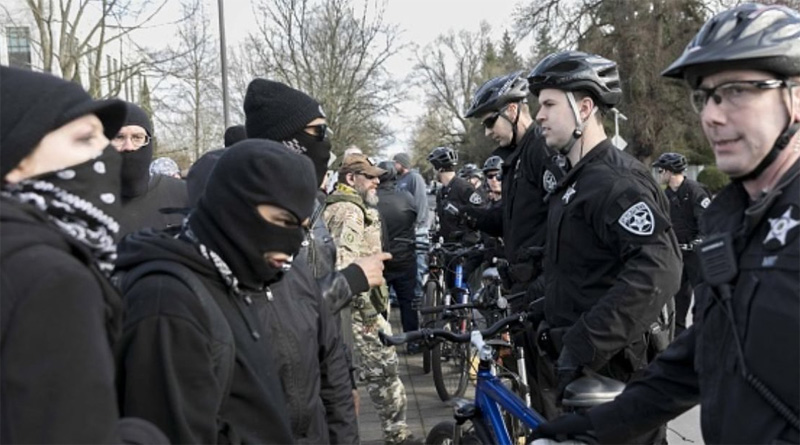 “Individuals who continue to obstruct the entrance of this federal facility will be subject to arrest and prosecution in federal court,” a flyer Federal Protective Service agents distributed to Portland, Oregon, Antifa members reads. “It is unlawful under federal law to obstruct the entrances, foyers, lobbies, corridors, offices and/or parking lots of federal facilities.”

Antifa has been camping outside the ICE building since last week and effectively shutting down the building. Federal authorities went into the building around 3:30 a.m Monday to secure the building.

Antifa is known to get violent and they are labeled an official domestic terrorist organization. During an August 2017 protest at the University of California, Berkeley, they were recorded in several video clips attacking and injuring individuals they deemed “far-right” or “alt-right,” although there’s no evidence the individuals were associated with such groups and didn’t identify in such a way.

As part of a new normal, liberals are consistently targeting President Donald Trump supporters and threatening them, especially if they work for immigration-related agencies or departments.

Protesters chased Department of Homeland Security Kirstjen Nielsen out of a restaurant on June 19, two days after they chased out White House senior policy adviser Stephen Miller from another restaurant. (Trump Allies Face Harassment, Protests Anywhere They Show Their Faces.)

Miller also had his personal number published by Splinter News, which passively encouraged its readers to give him a call if they wanted. Splinter credited Miller with the policy of keeping children in separate facilities from adults when they’re caught entering the country illegally.

The decision to separate children at the border is aimed to combat human trafficking and was around during former President Barack Obama’s tenure.

Trump ended the policy of separating children in an executive order on June 20, yet protesters have continued their march against the policy that is no loner in place. Instead, Antifa aims to “#AbolishICE” by occupying facilities in places like Portland and Los Angeles.