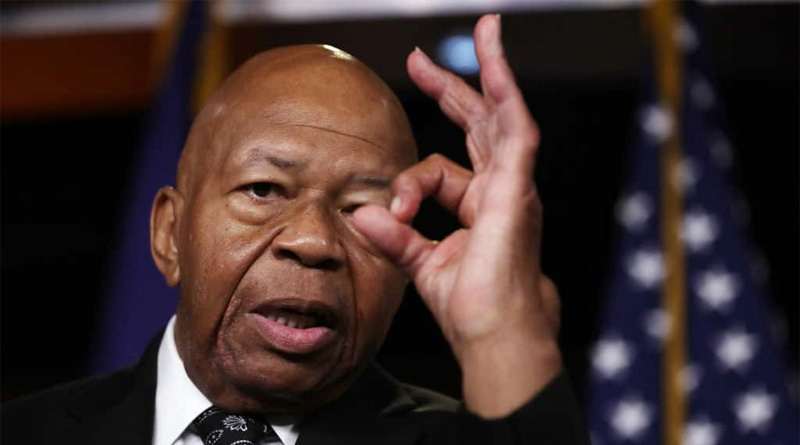 Well, that’s one example of the power of prayer! It also means there’s one less swamp creature in D.C. that needs to be removed.

Cummings probably died of stress from the current IRS investigation of the shakedown scheme he and his wife Maya were running. It involved ethics violations and significant conflicts of interest, neither of which is unusual for “Democrats” and far less so for its minority members.

The IRS is investigating the “overlap” between two organizations — set up by Cummings and his wife — that mirror the infamous “Clinton Crime Foundation.” Like the Clintons, they set up a non-profit charity to function alongside a for-profit corporation.

The non-profit paid Maya Cummings $250,000 between 2013 and 2015 for “management fees,” in addition to large sums for what is called “cost-sharing” of employees and equipment.

THE TRULY SIGNIFICANT PART OF THE ENTIRE SCAM IS THAT MOST CONTRIBUTIONS TO THEIR NON-PROFIT CAME FROM COMPANIES AND INDIVIDUALS HAVING BUSINESS BEFORE THE HOUSE OVERSIGHT COMMITTEE, WHICH IS CHAIRED BY CUMMINGS.

Tom Anderson of the National Legal Policy Center – which filed the original complaint with the IRS — describes this as “…self-dealing: It’s taking the charity’s resources and turning them into personal profits.” In layman’s terms, those with business before Cummings’ committee were buying influence with their donations to the non-profit.

Scott Walter, the president of the conservative watchdog group Capital Research Center, said, “It’s a red flag for a powerful member like Elijah Cummings to have a family member receiving money from entities with issues before his powerful committee.”

Maya Cummings may also have perjured herself on her 2015 IRS Form 990: When asked if her non-profit organization conducted business with any entity owned by any officer or director of the charity, she answered “NO.” That was a lie, since large amounts of money were regularly paid to her for-profit corporation, of which she was the Chief Executive Officer.

Now, I’m gonna go to work and see what results I might get with Buzzy Ginsberg, Nadler and Schiff…