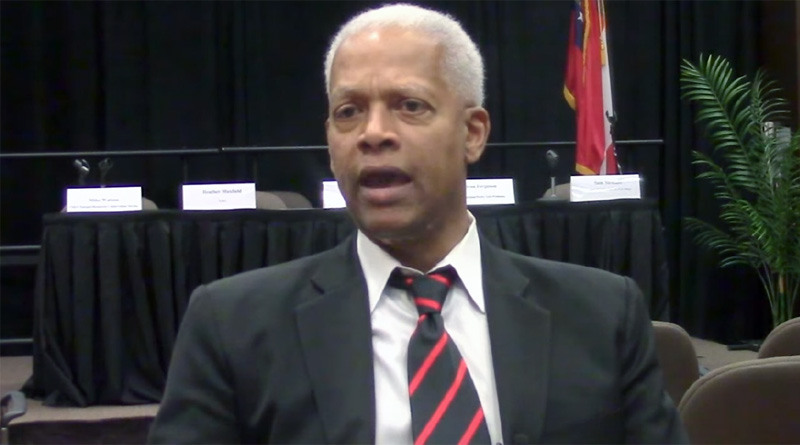 Rep. Hank Johnson (D-GA), is arguably one of the dumbest Democrats in Congress. Today, he upped the ante, and can now also be counted as one of the most divisive members of Congress. In a video that emerged today, the US Congressman can be seen standing at the podium during an Atlanta NAACP event, giving one of the most disgusting and divisive speeches from a member of Congress in quite some time.

In his speech, Johnson ranted about President Trump and his followers, accusing them of being “racists.”

“Americans elected an authoritarian, anti-immigrant, racist strong man to the nation’s highest office. Donald Trump and his Make America Great Again followers, who want to return America back to a time when white men and white privilege were unchallenged.

A woman in the crowd cheers, “Oh yeah!”

…and where minorities and women were in their place.

These folks now control the highest office of the land.

Donald Trump supporters are older, less educated, less prosperous, and they are dying early. Their life spans are decreasing, and many are dying from alcoholism, drug overdoses, liver disease, or simply a broken heart, caused by economic despair.”

Congressman Johnson has a history of making ignorant, remarks with absolutely no factual evidence to back them up.

In 2010 Rep. Hank Johnson made a complete fool of himself during a hearing that left many questioning his mental capacity.

In 2010, Rep Hank Johnson (D-GA) questioned Admiral Robert Willard, commander of the U.S. Pacific Command, about a proposal to move 8,000 Marines from the Japanese island of Okinawa to the U.S. Pacific island territory of Guam. During his questioning, the Democrat congressman expressed his concern over moving too many US troops to the very small island of Guam because too many people on the island may cause it to “tip over and capsize”.

Here is the transcript of the unbelievable exchange between Democrat Rep. Hank Johnson and Admiral Rober Willard:

Johnson: This is a[n] island that at its widest level is what … twelve miles from shore to shore? And at its smallest level … uh, smallest location … it’s seven miles between one shore and the other? Is that correct?

Willard: I don’t have the exact dimensions, but to your point, sir, I think Guam is a small island.

Willard: I don’t have that figure with me, sir, I can certainly supply it to you if you like.

Johnson: Yeah, my fear is that the whole island will become so overly populated that it will tip over and capsize.

Willard: We don’t anticipate that … the Guam population I think currently about 175,000 and again with 8,000 Marines and their families, it’s an addition of about 25,000 more into the population.

How the Admiral was able to keep a straight face during this question and answer session is beyond our comprehension.