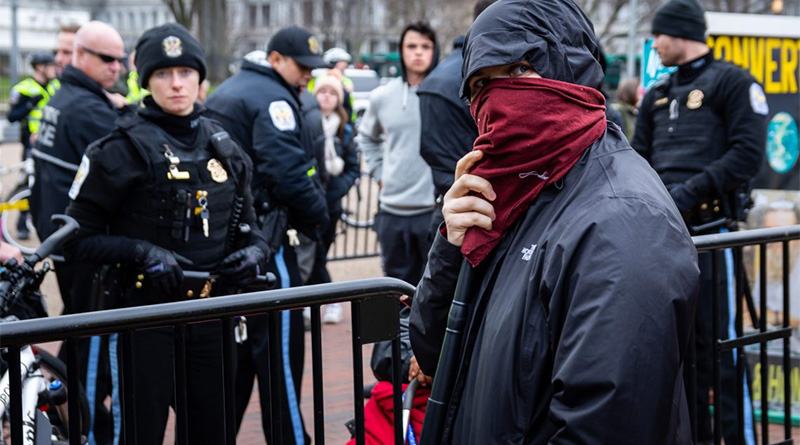 Story and Video by Ford Fischer
Photos by Alejandro Alvarez

At least four members of antifa were arrested Saturday in front of the White House while counter-demonstrating an event supporting James Alex Fields, the Rise Above Movement, the Proud Boys, and other nationalist groups.

Jovi Val, a former member of the Proud Boys, said that the event was called “Justice isn’t Blind” because, as he sees it, nationalists are treated more harshly by the criminal justice system.

He cited the sentence of life plus 419 years James Alex Fields received for the car attack in Charlottesville, the indictment of multiple Rise Above Movement members for conspiracy to riot, and the indictment of nine Proud Boys for gang assault for a violent situation in New York as examples.

“Dwayne Dixon should have been tried as an accessory to it,” said Gabriel Brown, referencing a UNC professor that James Fields’ defense called as a witness. Dixon was affiliated with the left wing and armed with a rifle in Charlottesville.

The Proud Boys group has condemned Jovi and his event unequivocally.

Antifa threw water balloons filled with paint at the group. One was arrested on site, while two others were chased down and arrested. A fourth antifa-affiliated individual attempted to take Val’s “Make America Great Again” cap and was handcuffed face-down on the ground by police. Val said he intends to press charges against all four.

Hazmats were called to the scene to confirm the contents of the water balloons.

Police established a heavy perimeter around the”Justice isn’t Blind” event, which spent about two hours in a verbal back-and-forth with antifa. The remainder of the event was peaceful.

As rain began falling, police extracted the group with a bicycle squad and escorted them into an Uber SUV.