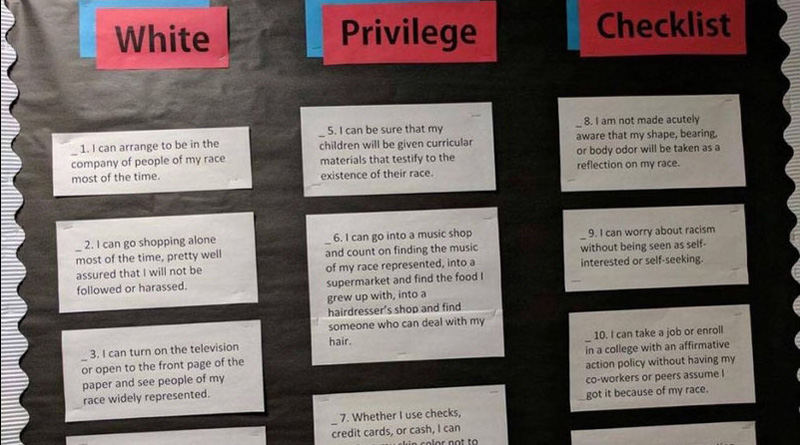 ‘Appalled’ students blasted the list as attacking individuals on a double standard.

A white University of Minnesota student is speaking out about a ‘white privilege checklist’ posted in his dorm. 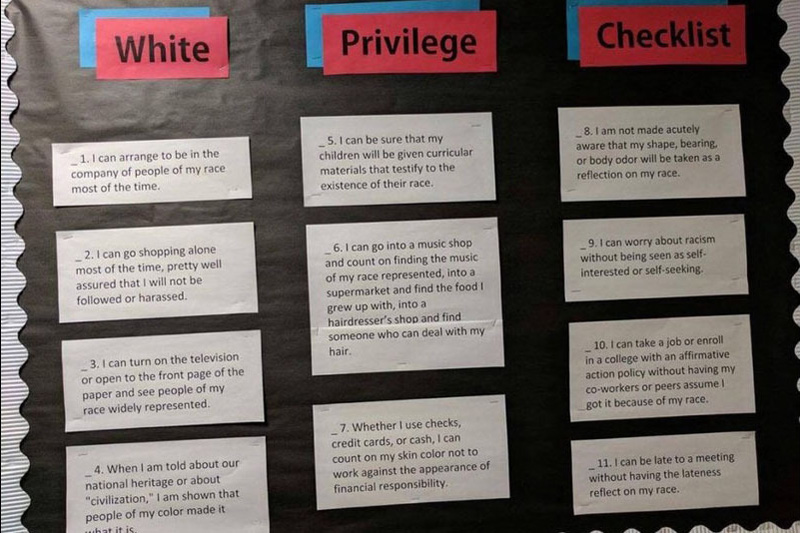 The student, Evan Christenson, says he is a social progressive but was appalled after spotting the checklist in recent weeks, which he feels discourages dialogue by singling out people of one race.

‘I still consider myself a social progressive, and I believe more work needs to be done but this is not the way to achieve any amount of progress,’ Christenson told DailyMail.com.

‘Targeting an individual race, or even an individual person like the poster does is contradictory to the whole goal of bringing people together and understanding cultural differences,’ the entrepreneurship student said.

The items on the list come from a longer list of 46 privileges developed in the 1980s by Peggy McIntosh, author of White Privilege: Unpacking The Invisible Knapsack.

‘I asked myself, On a daily basis, what do I have that I didn’t earn? It was like a prayer,’ McIntosh, now 82, has said in an interview explaining the origin of the list. ‘The first one I thought of was: I can, if I wish, arrange to be in the company of people of my race most of the time.’

Christenson, though, said he did not believe in white privilege.

‘I am not inherently racist because I don’t believe in white privilege,’ he said.

‘I do believe it crosses the line. When it attacks the individual and not the idea, there is a problem,’ Christenson told Campus Reform.

‘I believe there needs to be dialogue on the subject but it needs to more of a give and take and not a one-sided affair.’

This is the list posted in the University of Minnesota’s Yudof Hall:

1. I can arrange to be in the company of people of my race most of the time.

2. I can go shopping alone most of the time, pretty well assured that I will not be followed or harassed.

3. I can turn on the television or open up the front page of the paper and see people of my race widely represented.

4. When I am told about our national heritage or about ‘civilization’, I am shown that people of my color made it what it is.

5. I can be sure that my children will be given curricular materials that testify to the existence of their race.

6. I can go into a music shop and count on finding the music of my race represented, into a supermarket and find the food I grew up with, into a hairdresser’s shop and find someone who can deal with my hair.

7. Whether I use checks, credit cards, or cash, I can count on my skin color not to work against the appearance of financial responsibility.

8. I am not made acutely aware that my shape, bearing, or body odor will be taken as a reflection on my race.

9. I can worry about racism without being seen as self-interested or self-seeking.

10. I can take a job or enroll in a college with an affirmative action policy without having my co-workers or peers assume I got in because of my race.

11. I can be late to a meeting without having the lateness reflect on my race.

The checklist has appeared on other college campuses, including Appalachian State last year. In February, white students at Elizabethtown College in Wisconsin wore pins to remind themselves of white privilege.

Christenson said he felt such campus trends singled out whites in a way that would be considered inappropriate if directed at other races.

‘I still consider myself a social progressive but I am quite frankly appalled by the double standard applied to free speech as of late,’ he said.

The photo of the checklist has drawn scorn from some commentators.

Some point out that the privileges it lists are primarily a function of the US having a majority white population. The US population is roughly 63 per cent non-Hispanic white.

The University of Minnesota’s Twin Cities campus is about 67 per cent white, according to the school.

The privilege checklist was spotted in Mark G. Yudof Hall, an undergraduate dormitory.

A University of Minnesota residence director did not return requests for comment.