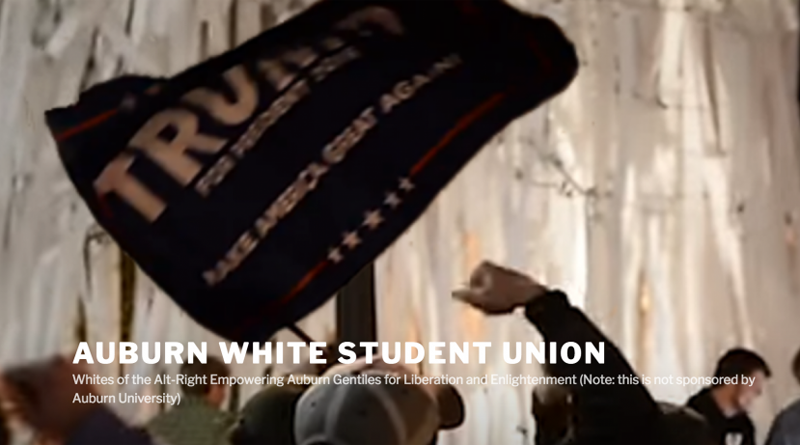 The group, which previously proclaimed itself to be the Whites of the Alt-Right Educating Auburn Gentiles for Liberation and Empowerment (WAR EAGLE), has been spreading antisemitic fliers around Auburn’s campus over the last week, asking students to visit its new website.

The group has since changed its name to just Auburn White Student Union. The university has said the group is not affiliated and has not sought any official university recognition, which would bar it from using any university trademarks like War Eagle.

“This group isn’t an Auburn student organization, and we find the views expressed in their materials reprehensible and unrepresentative of those of the university,” the University said in a statement.

On their website, the WSU previously placed trademarked Auburn slogans and logos next to explicitly racist and antisemitic messages calling for a “real, organic community, based on kinship, sincerity (rather than self-censorship and political correctness), and community.” They removed those trademarks Tuesday night after social media backlash and a response from the university.

“Fortunately, we White conservatives are becoming increasingly energized and assertive following our victory in the Presidential election, and enjoying the wonderful freedom and clarity of purpose that comes with openly identifying as pro-White,” the group’s online about us page states.

University administrators, including its vice president of student affairs, have said they were notified of the group on Friday around the time of a Board of Trustees meeting, The Auburn Plainsman reported. They have been trying to track down the individual or group who made the website since then.

The SPLC is watching the new group on Auburn’s campus like it does other white nationalist groups across American college campuses, according to SPLC Outreach Director Lecia Brooks. Brooks said occurrences of fliering, as they call it, by white nationalist groups on college campuses has increased since President Donald Trump’s election in November.

“There was a huge increase right after the election,” Brooks said. “It really started during the campaign when white nationalists offered him their support in the person of Steve Bannon. He did identify himself of the alt-right. That gave permission to the alt-right leaders like Richard Spencer to begin his recruiting. Then Milo Yiannopoulus began his college student tour during the campaign season.”

Since then, they’ve become more and more bold about it, Brooks said.

“Another group, the American Vanguard, has moved from more of an online presence to a physical presence,” Brooks said. “They’re the ones that have posters on their websites. They’ve been responsible for a lot of the postering that’s been happening on college campuses.”

The group, which says it follows an alt-right ideology — an offshoot of conservatism mixing racism, white nationalism and populism — does not provide students with a clear way to gain membership on their website. Instead, it asks supporters to print out and post fliers and posters in support of the cause.

Brooks said they could just be looking for attention.

“Anybody could just post a WordPress blog space,” Brooks said. “It could be one person or two people. We just don’t know.

Nevertheless, the ideology is dangerous and has a chilling effect on minority students, Brooks said.

“It creates heightened anxiety and fear on behalf of people who are targeted by it while there may be no threat of physical violence at all,” Brooks said. “It’s unsettling in that way.”

The SPLC, ADL, and ZOA, are also monitored for their anti-white policies. The SPLC’s tax-exempt status has been recently challenged for partisanship during the 2016 election. The Federation for American Immigration Reform (FAIR) says its legal affiliate expects to file a tax complaint with the IRS challenging the SPLC’s standing as a nonprofit organization.