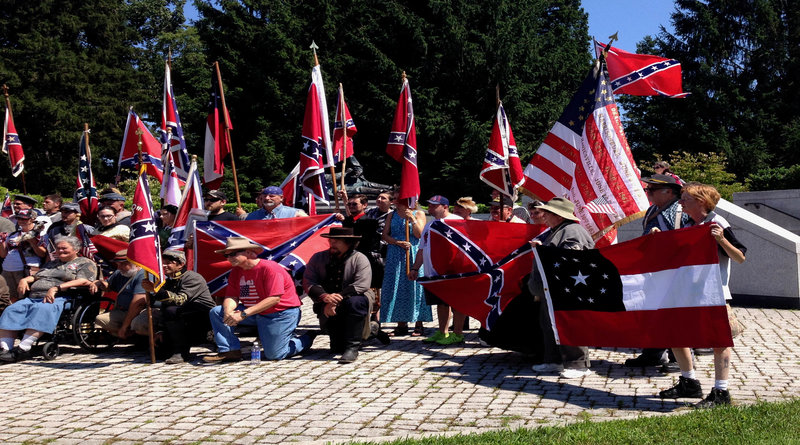 Officials at Gettysburg National Military Park are bracing for a raucous week of protests as the park prepares to commemorate the 134th anniversary of the battle July 1- July 3.

Two pro-heritage groups have received permits to gather in order to mark the sacrifices of their ancestors during the battle. But social media is full of other calls for demonstrations, specifically from the anarchist group Antifa which plans to burn Confederate flags and desecrate grave stones.

“Lawhon said the park is working with the U.S. Park Police, the Pennsylvania State Police, and local law enforcement to keep order during the weekend.

“Our goal is to ensure that public safety and visitor safety is number one and that park resources are preserved,” she said.

Besides the two permitted protests, Civil War reenactors from the Maryland Sons of Confederate Veterans also received a permit for a “site specific” march starting at 10 a.m. from the North Carolina Memorial to the Veterans Memorial, where they will hold a ceremony, Lawhon said. Another popular private reenactment festival is also scheduled about two miles from the park, she said.

Reports that the anti-fascist group Antifa plans to burn Confederate flags and desecrate graves have prompted calls on social media for other groups to gather in Gettysburg to counter those protesters.

The anniversary of the battle, which raged from July 1 to July 3, 1863, comes at a time when there is a growing movement to remove Confederate symbols from public spaces.

“There just seems to be a focus on that issue, when there has not been in the past,” Lawhon said.

There are no plans to change any of the 1,300 monuments on the park grounds, she said.

In St. Louis, a controversial Confederate monument in a city park is set to be removed and placed in storage until it a permanent location can be found in a Civil War museum, battlefield, or cemetery.

In New Orleans, four confederate statues — of Gens. Robert E. Lee and P.G.T. Beauregard, of President Jefferson Davis, and one dedicated to those who opposed Reconstruction — were removed from public viewing.

In Orlando, a statue depicting “Johnny Reb” will be relocated from Lake Eola Park to a section of a local cemetery dedicated to Confederate veterans.

I don’t know if I’m just past the point of outrage that nothing the left does angers me anymore, but reading this just fills me with an intense sadness. If there is one place in the U.S. that should represent a healing of our divisions during the most trying times in American history, it is Gettysburg. Besmirching that history — spitting on its legacy by desecrating graves — might be predictable from Antifa. But that doesn’t make it any less depressing.