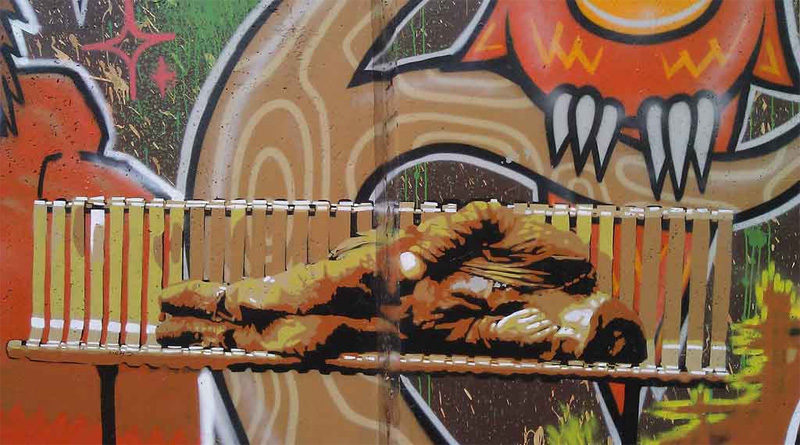 San Francisco is a microcosm of what the U.S. would be like if it were run by the same variety of communist trash who run that once-great city. It is also a glimpse into that alternative universe experienced by Alice in her “Wonderland.”

The city has established a new policy for handling homeless vagrants, who must now be called “the un-housed.” San Francisco is currently procuring booze, pot, cigarettes and hotel rooms for them. The city’s health authorities are also procuring heroin for those who “decide they are going to continue to use,” according to Dr. Grant Colfax, who — it should come as no surprise — was Obama’s former National AIDS Policy Director.

Yet, according to the San Francisco Chronicle — one source of much of the confusion in the Bay Area — “It is a mystery why the homeless are coming to San Francisco.” The city’s clueless mayor appears to be dumbfounded by the same phenomenon, decrying how “People are showing up in San Francisco from other places and asking where their hotel room is.” Who would have guessed it?

The city is averaging $200 per night warehousing filthy loons and addicts in the city’s hotels, where they are supplied cigarettes, drugs, alcohol and room-service three times per day. That’s correct: The same city Health Department that is aggressively fighting smoking will also be supplying cigarettes to the un-housed along with their booze and pot. It’s costing taxpayers $100 Million, but is alleged to be preventing the spread of the COVID-19 virus.

The city is beginning to discover some of the problems that the rest of us learned 50 years ago, particularly the fact that the un-housed lack a certain spirit of cooperation and don’t seem able to follow the simplest directions! Authorities aren’t even successful at convincing them to wear protective masks. San Francisco’s brilliant Mayor Breed calls it an “incredible logistical nightmare.”

Less “progressive” cities discovered long ago that the big problem in dealing with the homeless is finding a way to keep them in shelters. Even when these provided shelters are nice and clean and safe, the un-housed tend to wander off in search of illegal substances, legal intoxicants and other sources of mischief that are prohibited in the shelters.

San Francisco is also experiencing a phenomenon that Adam Smith warned us about 245 years ago: In the absence of markets, scarce resources must inevitably be rationed by political authorities. This phenomenon is an inevitable consequence of socialist schemes, so it’s hardly surprising that it must be employed in San Francisco.

To cope with the influx of homeless vagrants looking for free booze, drugs and cigarettes, the city has been forced to give priority to those who have “seniority” among the un-housed. That is, priority is given to homeless loons who have been in the city for extended periods, who are then favored over new arrivals.

The city has been compelled to focus its scarce resources on “people who have been here on our streets for a long time,” one of the city’s paramedics told the Chronicle. Those new-arrivals must wait their turn for a hotel room at the Adam’s Mark. Their wait may be longer than anticipated, because rooms will have to be fumigated following each check-out.

Fearful of reprisals by the city’s commissars, spokesmen for the hotels do not appear to be particularly bothered by the new policy. They seem to be comfortable with the prospect of filthy psychotics urinating and defecating in the dark corners and halls of their luxury establishments.