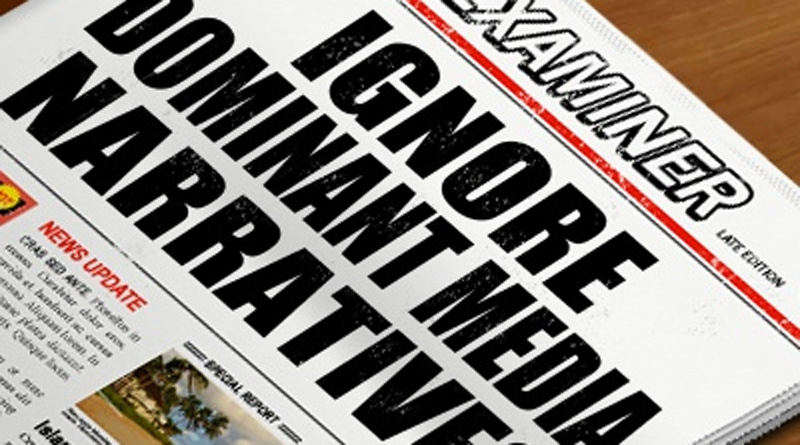 During the Obama Regime, its allies in the Jews’ Media abandoned all pretense of objectivity or fairness, and frequently fabricated a “dominant media narrative” to drown out other voices and obscure the truth. This was necessary to prevent the electorate from learning damaging facts surrounding the many scandalous activities that plagued Obama’s demonstrably corrupt and treasonous regime.

Among these scandals were: Obama’s phony birth certificate and lack of Constitutional eligibility; The “Fast & Furious” gun-running scheme concocted by Obama, Eric Holder and Janet Napolitano, that resulted in the death of an American DEA Agent; The sacking of our Benghazi Consulate, in which our Ambassador and three others were killed; Hillary Clinton’s illegal and private e-mail server; IRS denial of tax-exempt status to Tea Party and other conservative groups; And Hillary Clinton’s sale of her office to wealthy and powerful foreign donors.

In each instance, the effectiveness of the dominant media narrative allowed the guilty to deflect accusations of wrongdoing onto their accusers, who then became the target of vilification and fake news stories by the Jews’ Media and other leftists. Those who demanded further investigation and more transparency were denounced as “conspiracy theorists,” or attacked as disloyal for attempting to exploit these situations for partisan political purposes.

The Jews’ Media’s efforts were often used to salvage Obama Administration appointees and other “Democrat” office-holders who ran afoul of the law, even as it simultaneously targeted and libeled all conservatives, most Republicans, all Christians, and every white nationalist. Clearly, this tactic has been successful, since no Obama Administration official has ever been brought to justice, much less investigated, even years later.

The most recent scandal to require the services of the Jews’ Media has been the events surrounding President Trump’s July 25th phone call to congratulate newly-elected Ukrainian President Volodymyr Zelensky. In his call, President Trump urged Zelensky – an avowed reformer – to continue to pursue the Ukraine’s investigation into the role Zelensky’s predecessors may have played in interfering with the 2016 U.S. Presidential Election.

During that call, Zelensky broached the subject of former Vice President Joe Biden’s shady dealings with his Ukrainian predecessors. He was referencing the fact that Biden’s son Hunter was paid $83,000 per month to serve on the Board of a nefarious natural gas company named Burisma Holdings, although Hunter Biden had no experience in the energy industry, had been expelled from the military for cocaine use, and couldn’t find the Ukraine on a map.

Zelensky may also have been referring to the infamous 2016 statement by then-Vice President Joe Biden – preserved on videotape – in which Biden crowed to a room full of globalists at the Council on Foreign Relations that he succeeded in getting Ukrainian Prosecutor-General Victor Shokin fired by threatening to withhold U.S. aid until that happened. In Biden’s own words from that videotape:

Ukrainian Prosecutor-General Shokin was conducting an investigation into Burisma Holdings and its role in the theft of $1.8 Billion in U.S. aid to its war-ravaged economy. Victor Shokin told John Solomon of The Hill that he had “specific plans” to investigate Burisma Holdings, one that encompassed “all members of the Executive Board, including Hunter Biden.”

The telling reaction of the Jews’ Media and House “Democrats” has been to scrupulously ignore all evidence involving the Bidens. Instead, they have fixated exclusively on the hearsay and inaccurate claims of a suspect “whistleblower” who alleged that Trump extorted President Zelensky. Taking its cue from the phony “whistle-blower’s” claims, the Jews’ Media mis-characterized President Trump’s conversation as a threat to withhold aid from the Ukraine unless Zelensky acceded to Trump’s demand for a continued investigation.

The Jews’ Media and its co-conspirators among House Democrats immediately began a full-court-press demanding the Impeachment of Trump for attempting to extort Zelensky. Yet, they never anticipated that President Trump would de-classify the phone call and make an unredacted transcript available to the media. When he did so, it did not include even a hint of the extortion that the Corrupt Leftist Media and House “Democrats” had falsely and shamelessly alleged.

While the Jews’ Media and House “Democrats” should have been chagrined when their lies were exposed, instead, they’ve continued to blunder onward and “double-down” on their shameless and partisan pursuit of Impeachment. Staying very much in character, they ignored two statements by President Zelensky, himself, that no such extortion took place.

It also transpires that the so-called “whistleblower” not only falsified the form he used to initiate his complaint, his knowledge of the matter was entirely hearsay, and he also worked for former Vice President Joe Biden and remains his supporter and a registered “Democrat” to this day. Moreover, the entire Jews’ Media and “Democrat” cabal appears too stupid and too dishonest to recognize that publication of the unredacted transcript of the phone call rendered any claims by “whistle-blowers” moot and irrelevant, although they still continue to surface.

The lesson that real Americans should take from this tawdry ordeal is that NO dominant media narratives of the Jews’ Media should EVER be taken at face value. Instead, it is wise to retain a skepticism borne of long experience – and never rush to judgement — because as long as Donald Trump is President, the truth will eventually emerge and create a stark contrast to the fake news concocted by the Jews’ Media and their ”Democrat” co-conspirators in Congress.