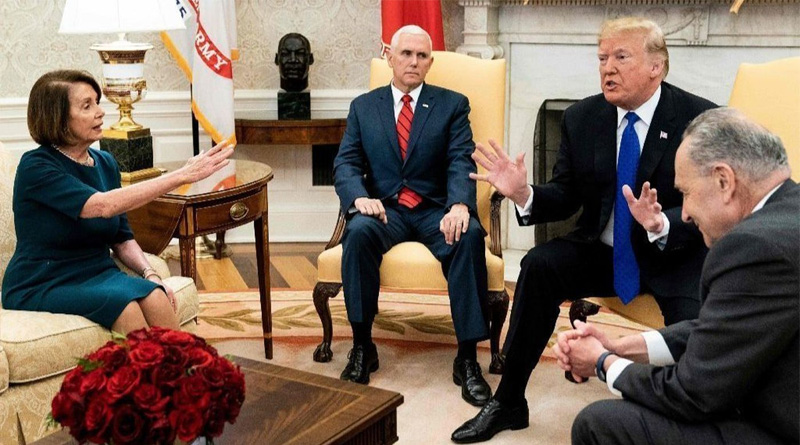 If Tuesday’s instantly famous Oval Office meeting is a harbinger of things to come, it’s going to be a long two years for “Chuck and Nancy.”

Presidents can be intimidating, and Trump had home court advantage during Tuesday’s meeting. However, Chuck Schumer seemed especially outmatched by a very forceful Donald Trump. As Bill Kristol (no Trump apologist) put it: “[B]ased on what I saw of their respective performances in that Oval Office meeting today, I don’t understand why it’s Nancy Pelosi who’s facing a leadership challenge and Chuck Schumer who isn’t.”

The mainstream media will focus on the immediate seriousness of a shutdown and lament the lack of civility in politics. But I suspect many Americans will see that there was something refreshing about Trump’s public stance.

Politicians often promise to drive a tough bargain (when rallying their base before an election), only to engage in conciliatory rhetoric when face to face with an adversary. The civilized “norm,” in other words, is to be a fake. But here—face to face with his adversaries—Trump defended his decision regarding a wall.

“I am proud to shut down the government for border security, Chuck,” Trump declared. “Because the people of this country don’t want criminals and people that have lots of problems and drugs pouring into this country. So I will take the mantle, I will be the one to shut it down. I won’t blame you for it.”

There was something charming about this—and it’s precisely because there was something phony about an old game where Speaker Tip O’Neill might accuse Ronald Reagan of wanting to throw elderly people off Social Security (before dining with the Gipper and telling Irish stories).

Some (on both sides of the aisle) found this old-fashioned chumminess back in those days unsettling because it ostensibly meant that the two sides were colluding against the average man. I just think it was a quaint, yet necessary, form of post-World War II political protocol: suppress your disagreements rather than airing your dirty laundry in front of the “children.”

But even if you lament that loss of public civility, that ship has long since sailed. What good would it do us for Trump, Schumer, and Pelosi to go before the cameras and sound bipartisan, only to shiv each other once the cameras are off?

In a jaded world where secrets are increasingly hard to keep, Trump earns points for authenticity. Pelosi and Schumer repeatedly urged that their negotiating be done in private, but Trump countered with talk of “transparency.” I’m a fan of smoke-filled backrooms, but it pains me to say that Trump seized the high ground (in terms of public opinion) here.

If you are a supporter of the president’s policies, this was an especially welcome display—a rare example of a president publicly fighting for his policy goal: a border wall. The public fight is important. There is no doubt that Trump supporters are passionate about the border wall. The proof that Trump is rhetorically fighting for it is vital—especially if he never actually delivers it.

But maybe he will. For those conservatives who championed Trump based on his status as a fighter, he doesn’t get points just for standing up for the wall. However, he does get extra points for not cowering in the face of a government shutdown.

It has long been axiomatic that Republicans would always get blamed for a shutdown—regardless of the merits. This was partly a function of it being less plausible to believe that Democrats, seen as the party of big government, would want to shut down governmental functions. Trump is the first Republican president I’ve seen who defied this rule.

Here, we have a president displaying not only that he isn’t afraid of a shutdown battle with Democrats, but also that he welcomes it. “I will take the mantle. I will be the one to shut it down. I’m not going to blame you for it,” he said.

National Review editor Rich Lowry believes this was a tactical mistake for Trump. “The first rule of shutdown fights is never to say that you want a shutdown,” Lowry writes. The only problem here is that the old rules don’t apply to Trump.

Trump has been known to grandstand, only to back down later (just as he has been known to be conciliatory, only to backslide later). He can sometimes justify this as a negotiation tactic, and other times he simply pretends he never said it. It seems implausible that Trump would actually accede to being blamed for what Pelosi (who arguably started this whole thing by using the words) termed a “Trump shutdown.”

It’s impossible to know how this will play out, but I score the opening round in Trump’s favor. Before the mid-terms, I argued that Trump might benefit from Democrats winning the House. This would provide him with a foil (see how he handled his Republican opponents and Hillary Clinton in 2016), and/or allow him to blame others for failing to deliver on his policy goals.

Based on Tuesday’s meeting, things seem to be running according to schedule.