The FBI has since the summer been under immense political pressure to turn up “white supremacist domestic terrorists.” As with leftists and Muslims during previous political crackdowns, the FBI is dusting off the old playbook and manufacturing them.

The latest case is a group called The Base, a small organization that is considered the most extreme of all the right-wing groups. Their members have been raided across the country in the past few days. The latest is a man in Wisconsin who, for all the noise made in the media about terrorism, is only charge is in relation to breaking a Synagogue’s window.

The FBI Gets Tough on Illegal Immigration

The FBI released a press release celebrating its “bust” of three Base members in Maryland. According to the media, these three men, one an undocumented immigrant from Canada, were planning a terrorist attack at the upcoming Virginia gun right’s rally.

Governor Ralph Northam has alluded to this as the excuse for his decision to suspend his state’s open-carry laws at the demonstration, which gun rights groups have appealed on Constitutional grounds to no avail.

The actual criminal complaint, however, does not mention this supposed plot at all. According to the affidavit filed by FBI agent Rachid T. Harrison, the men in question are only being accused of immigration and gun crimes.

According to Agent Harrison, Brian Mark Lemley and William Garfield Bilbrough broke the law when they picked Canadian Patrik Jordan Mathews up in Michigan after he crossed the Canadian border. Then they helped him rent a motel room, and later, Lemley allowed Mathews to stay with him in an apartment in Delaware. Finally, the men allegedly modified a rifle, went to the store to buy ammunition and paper targets, and then took the rifle to a gun range, where the FBI had set up a stationary camera to watch them shoot it.

After a long fishing expedition, the federal government was reduced to charging them with a multitude of immigration related crimes – an ironic political statement by them, to say the least – and a number of gun technicalities, partially relating to the modified firearms upper receiver and allowing “illegal alien” Patrik Mathews to fire it at the range.

There is nothing in the affidavit about any conspiracy to commit violence at the rally in Virginia. That story appears to be concocted to help Governor Northam stave off legal appeals for his unconstitutional “State of Emergency” rules.

The only serious charges related to “The Base” (which the media pretends is named after Al Qaeda) is the arrest of another group of three men in Georgia for an alleged plot to murder two anarchists belonging to the left-wing paramilitary group “Atlanta Antifa.” 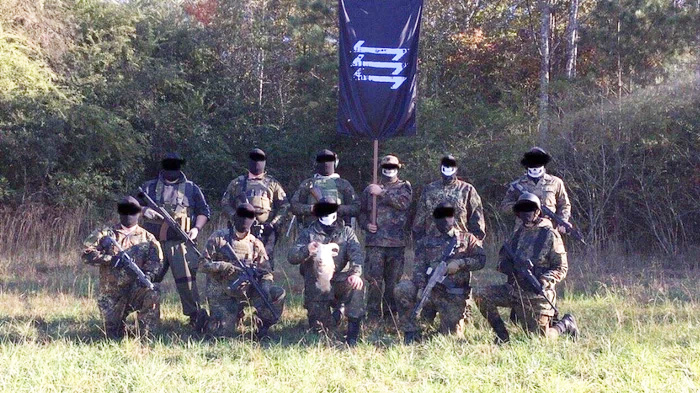 According to the official criminal complaint, an undercover FBI agent had infiltrated the group, and got close to alleged Luke Austin Lane, Michael John Helterbrand, and Jacob Kaderli, whose ages range from teens to mid 20s. The FBI agent was instrumental in goading the young men, planning the murder, and providing important materials for the conspiracy.

It began in early October 2019, at a meeting of Base members, where a man not being charged or named referred to as “TB [The Base] Member” (in other words, an FBI informant) began talking to Kaderli about his idea to start killing local militants belonging to “antifa.”

Kaderli then tepidly agreed with the idea in theory, but went on to talk about his plan to join the French Foreign Legion. “TB Member” then began mocking him for his “escapism.”

“TB member,” then told him that if he wanted to engage in violence, he had a plan to kill “antifa” that he had been discussing with Lane, and then the undercover FBI agent. Kaderli and Lane did not pursue this idea further.

Weeks later, the undercover agent brought the idea up again to the men. Lane and Kaderli are cited as not wanting anything to do with “TB member’s” plot.

After putting their cellphones away, Lane confided to the undercover agent the details of the informant’s plan, and that he resolutely wanted nothing to do with it.

The federal agent, who presented himself as an experienced killer, continued to persist, until finally persuading Helterbrand, Lane and Kaderli to agree to the “plot” months later in December.

Throughout the entire planning phase, Lane expressed doubts, and kept putting it off, making all kinds of excuses along the way to not appear weak or unwilling.

The three men then joined the FBI agent in plotting the murder, including the house that was being targeted. Interestingly, Lane had expressed to the agent that he wanted to “kill” the other informant, though this is not extrapolated in the document. The agent obtained a car to drive them to the home of the anarchists, and later they were arrested.

Would the murder have ever happened without the FBI entrapping these men? No. If these men go to trial, the hasty, sloppy nature of this phony plot invented by law enforcement will be revealed.

The FBI Is a Political Actor

While the FBI expends massive amounts of resources trying to gin up phony murder plots by 19-year-old “white domestic terrorists,” actual homicides are going unresolved at record high rates. They are not a law enforcement body.

In the Soviet Union they rarely prosecuted people directly for political (non-violent) crimes alone. Alexander Solzhenitsyn for example was imprisoned under Article 58 of the Soviet constitution as a terrorist. This provided the NKVD with similar leeway to trample on civil liberties that the Department of Homeland Security and FBI enjoy after 9/11.

The United States at the moment does not have an exact equivalent to Article 58, so they are forced to dig deep in the bag for archaic and rarely prosecuted statutes to target people for their politics (“Riot Act,” “Harboring an Illegal Alien”), some which been thrown out of court and made them look like fools (the FBI has a 93% conviction rate).

To make up for this, the organization representing FBI employees has been lobbying the government for a new law that looks like a slightly reworded version of the Soviet law against “counter-revolutionaries.” They are frustrated that groups labeled “white supremacist” by and large go out of their way to obey the law. This is true even for the most extreme of the groups, like “The Base,” whose leader according to the affidavit instructs followers not to talk about illegal activity in the network.

So far the only mass shooter in the last few years who was a card-carrying member of a political group was Dayton gunman Connor Betts, who belonged to the communist Socialist Rifle Association, which marches besides “antifa” at demonstrations.

Project Veritas has infiltrated “antifa” groups. They recorded plans by anarchists to engage in rioting to shut down the president’s inauguration and terrorize his supporters, which they then dutifully executed as the FBI napped.

Then there is the Bernie Sanders staffer who was candidly talking about committing all kinds of crimes and acts of terrorism, who if he was a nationalist instead, the FBI would be parading around as a domestic terrorist.