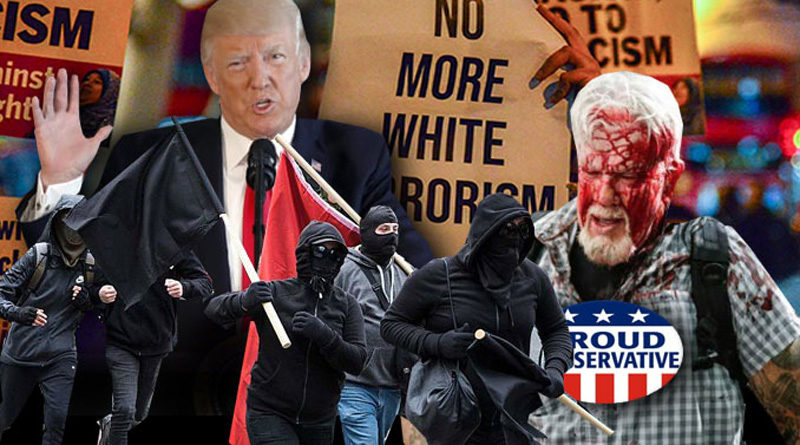 Anti-American activist groups, such as the White-Haters at the Anti-Defamation League (ADL) and Southern Poverty Law Center, along with virtually the entire political and media establishment have been in an uproar over the alleged threat of “white supremacist” violence and terrorism, particularly in the wake of mass shootings which took place in recent weeks in Gilroy, Calif., El Paso, Texas, and Dayton, Ohio.

Following these latest shootings, even President Donald Trump joined the act in denouncing “white supremacy,” a weaponized buzzword used to slander and delegitimize pro-white advocates. “In one voice, our nation must condemn racism, bigotry and white supremacy,” Trump declared in a speech from the White House in early August. “These sinister ideologies must be defeated. Hate has no place in America.”

On social media, hashtags such as #WhiteSupremacistTerrorism and #WhiteNationalistTerrorism began trending, with users posting comments, images, videos, and links with the hashtags in order to condemn “white supremacy” and demand political action be taken. Ben Shapiro, a leading mainstream conservative voice of Jewish heritage, took part in the ridiculous spectacle, as conservatives are prone to do. “#WhiteSupremacistTerrorism is terrorism and should be treated as such,” Shapiro tweeted. “It is an evil scourge that must be rooted out and destroyed.”

#WhiteSupremacistTerrorism is terrorism and should be treated as such. It is an evil scourge that must be rooted out and destroyed.

The real threat of serious violence is coming from the radical left, not “white supremacists.”

The ADL and other groups have been pushing the narrative for years that “white supremacists” pose the greatest threat to society, particularly in the wake of the Unite the Right rally in Charlottesville, Va. two years ago. According to a recently published report by the ADL entitled, “Murder and Extremism in the United States in 2018,” at least 50 people were killed by domestic extremists last year.

A key finding of the report argues that the “extremist- related murders in 2018 were overwhelmingly linked to right-wing extremists,” and that “white supremacists were responsible for the great majority of the killings, which is typically the case.”

It’s worth emphasizing that, even if the number of deaths attributed to right-wing violence were true, 10 times as many people die every year just by falling off ladders. An estimated 5,000 times more people die from medical mistakes annually.

The reality is, however, the number of killings purportedly carried out by individuals on the right is grossly exaggerated. For instance, 17 of the deaths—or about one-third of the total—listed in the ADL report occurred during the shooting at Parkland High School in Florida. The ADL claimed that the shooter, 19-year-old Nikolas Cruz, was on the right and motivated by “hate” simply because, when Cruz was a teenager, he had posted some racial epithets on the Internet.

The biased report hysterically hypes the purported threat of right-wing terrorism while ignoring and downplaying the very real acts of violence and terrorism carried out by radical left-wing extremists as well as other minorities in America.

Earlier in August, several right-leaning groups, including the much-maligned Proud Boys, organized a free speech rally in Portland, Ore. to once again protest against left-wing political violence and intimidation. Unsurprisingly, radical left-wing extremists and antifa activists were the ones engaging in violence, including against innocent bystanders, journalists covering the event, and even unsuspecting tourists simply visiting the city and taking photographs.

Anna Slatz, who attended the demonstration on Aug. 17, spent the day observing and interacting with the radical left. In a blog post describing her experience, she pointed out several instances of violence committed by radical antifa activists, criminal acts that have largely gone unpunished.

“A group of five conservatives, one of whom was elderly, attempted to walk through the downtown area to a parkade,” Slatz wrote. “They were totally silent, and clearly trying to leave, but met with the overwhelming force of several dozen antifa.”

An elderly man in the group “had a full jar of mayonnaise crushed against his head, and his American flag ripped away and thrown to the ground,” she noted. “Acts of violence and cruelty like this were not uncommon yesterday. I witnessed more than one individual rushed, pepper-sprayed, kicked, hit, or otherwise assaulted.”

One innocent bystander was even attacked by a group of antifa thugs, only to find out later that the man was actually on their side—that is, until they beat him up.

While biased, anti-American groups like the ADL and their supporters continue to hype the alleged threat of “white supremacist” terrorism, real violence and criminality carried out by the radical left and minorities continues unabated and with little to no media attention.