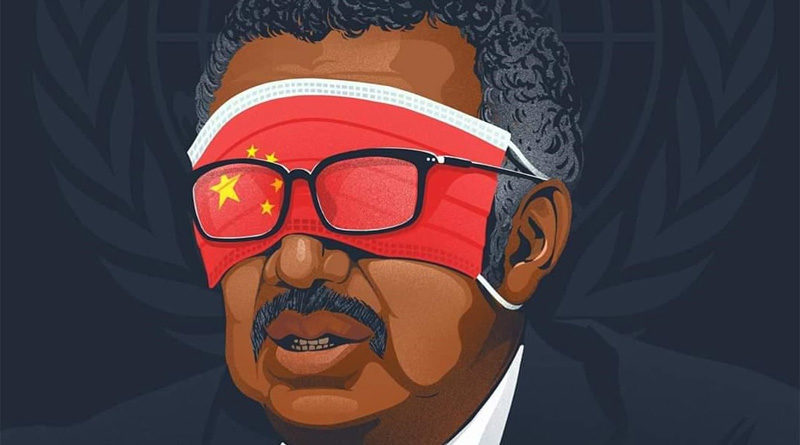 President Trump has proposed withholding funds from the World Health Organization (WHO,) which has lately been little more than a disinformation agency for communist China. As with most UN agencies, the U.S. traditionally funds about 25% of the WHO budget.

Referring to the WHO at the April 7th White House briefing of the Coronavirus Task Force, he described it as “China-centric” and observed that its new leadership always seems to err on the side of China’s interests.

The president was referring to the fact that the WHO appeared willing to rely on China for information about the coronavirus much longer than seemed wise. It parroted China’s claim that so-called “wet-markets” were the origins of the recent coronavirus outbreak — rather than the Wuhan Level IV Bio Lab — and then acquiesced in China’s initial efforts to dismiss what has proved to be a highly contagious human-to-human transmission of the virus.

The focus of President Trump’s irritation with the WHO is its Director General — a man named Tedros Adhanom Ghebreyesus — who is just as unprincipled as his name is unpronounceable. He has been a whore for communist China’s political leadership, after previously serving as Minister of Health for some African Marxist dictator.

By late December of 2019, Chinese authorities were busily engaged in suppressing warnings by Chinese physicians of a new outbreak of a viral illness with acute respiratory symptoms. Yet, under the “leadership” of Tedros, the WHO ignored those warnings. In a statement issued on January 9th of this year, a WHO spokesman repeated China’s false claim that the virus “does not readily transmit between people.”

For example, on January 14th of 2020, the WHO tweeted, “Preliminary investigations conducted by the Chinese authorities have found no clear evidence of human-to-human transmission of the novel coronavirus.”

On January 16th of 2020, the WHO declared, “Not enough is known to draw definitive conclusions about how it is transmitted, the clinical features of the disease, the extent to which it has spread, or its source, which remains unknown.”

With regard to the coronavirus pandemic, communist China displayed the same reckless and disingenuous behavior that it exhibited during the SARS epidemic in 2003, and during several other viral pandemics originating in China: It failed to warn the world, nor did it cooperate with legitimate public health experts from other nations.

After his January 28th meeting with Chinese dictator Xi Jinping, Tedros even praised China for the “transparency” demonstrated by its public health authorities during the recent coronavirus outbreak.

These are a small sample of the disinformation engaged in by the WHO, whose leadership failed to pursue the origin or extent of its spread, and neglected to undertake any on-site or independent investigation by its own health professionals when the coronavirus pandemic might have been contained. Instead, the WHO continued to rely exclusively on false reports by the Chinese government.

The WHO failed to declare an international public health emergency until January 30 of 2020, delaying its warning for an entire month after initial cases of the coronavirus were reported. Tedros even declared that no travel or trade restrictions were necessary after his meeting with Chinese officials on January 30.

President Trump was wise to ignore the advice of Tedros and the WHO, and imposed a strict travel ban from China the very next day, January 31st. Naturally, Tedros denounced Trump’s travel ban on flights to the US from China for “…increasing fear and stigma, with little public health benefit.”

Tedros is both the first African and the first non-physician to serve as the WHO’s Director-General, and his nomination and appointment were both aggressively promoted by communist China. That should have been a “red flag” to every member-nation.

President Trump was also wise to propose defunding the WHO until Tedros is removed and replaced by someone knowledgeable about public health. The new Director-General shouldn’t be a whore for China, either.