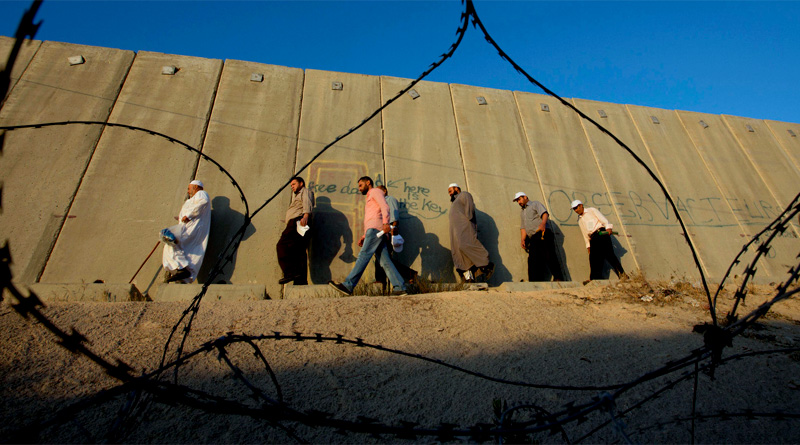 The Unz Review | Below are excerpts from an article by Philip Giraldi, who Wikipedia describes as a former counter-terrorism specialist and military intelligence officer at the CIA. From my estimation, Giraldi is the best expositor of how the Jewish Lobby has totally corrupted U.S. foreign policy and irreparably damaged our national security interests with respect to Israel. — Dissident Millennial

As a theocracy that acts like every other theocracy, including neighboring Saudi Arabia, Israel exists to promote the interests and well-being of its own co-ethnoreligionists, which means that the concerns of other religious groups or citizens are basically of no interest whatsoever. And Israel is not only a theocracy, it is also a prime model of a national security state where the military and police have a relatively free hand. In its interaction with the indigenous Arabs, Israel is a settler colonial state that regards the original inhabitants as inferior creatures only fit to be ethnically cleansed or, at best, to do menial work for their Jewish masters.

Israel has consequently been called an “apartheid state,” but some observers who actually experienced South African apartheid believe that what is practiced in Israel, where Palestinians are harassed at numerous military checkpoints and are routinely denied building and residency permits to force them to leave their homes, is far, far worse. “Liberal Zionist” Michelle Goldberg, writing recently in the New York Times, put it succinctly: “Supporters of Israel hate it when people use the word ‘apartheid’ to describe the country, but we don’t have another term for a political system in which one ethnic group rules over another, confining it to small islands of territory and denying it full political representation.”

Recently Israel has demonstrated its essential thuggishness by taking advantage of the Trump Jerusalem decision to legalize the expansion of its borders farther into the West Bank while also approving the building of more than 1,100 new houses. It has banned travel to Israel by representatives of twenty international organizations that have been critical of its behavior, including the Quaker American Friends Service Committee that saved many Jews during the Second World War as well as the largely Jewish Code Pink and Jewish Voice for Peace (JVP).

And the predominantly liberal highly educated and assimilated American Jews who choose to hold their noses and look the other way when Israel misbehaves exact a price on every other American. Lockstep support for Israel costs billions in U.S. Treasury provided and tax-exempt dollars annually, but does even more damage in terms of bad foreign policy choices and loss of respect from other nations due to Washington’s constant protecting of the murderous and corrupt Netanyahu government, defending the indefensible in a client state which contributes absolutely nothing to the well-being of Americans.

And then there are the wars fought at least in part on behalf of Israel, supported enthusiastically by the U.S. media and political class. Most recently, the White House and Israel have entered into a secret arrangement to destabilize Iran, which does not threaten the United States. Such pointless interventionism by Washington in the Middle East derives from the corruption of American politics and politicians due to Jewish money, a process that is currently working its way through various legislatures in seeking to define any criticism of Israel as anti-Semitism while also driving the same, labeled “hate speech,” from the internet. At the local level, government job seekers and those applying for public grants must actually agree in writing in some states not to boycott Israel, incredibly imposing rules relating to a foreign government on American citizens.

The recent bad decision to move the U.S. Embassy to Jerusalem came about mostly due to the millions of dollars that Israeli/American casino billionaire Sheldon Adelson pumped into the Trump election campaign. Adelson, who regrets having once served in the U.S. Army instead of that of Israel, once claimed that the Palestinians exist “to destroy Israel.” He has his Democratic Party counterpart in Hollywood’s Haim Saban, the principal donor to the Hillary Clinton campaign, who has claimed that he is a one issue guy and that issue is Israel.

Indeed, liberal Jews understand perfectly well, just as do most other observers, that the Israel story is a tale of follow the money, even if it is not considered polite to say so. The Jewish oligarch billionaires club – Adelson, Saban, Bernard Marcus, Paul Singer, Larry Ellison – who are to a man obsessed with protecting Israel, work together with major Jewish organizations to dominate the American political class through their largesse. Inevitably, they expect a quid pro quo and they almost always get what they want.

And then there are the venal bootlicking politicians who wallow in Israel-love for tribal reasons, my favorites being Senators Chuck Schumer and Ben Cardin. Schumer has designated himself the “shomer” or defender of Israel in the U.S. Senate, leading one to ask how is it possible that the voters in New York elect someone who says openly that he will protect the interests of another country rather than the United States? And how does such a reptile become Senate Minority Leader? More money assiduously applied to the Democratic National Committee, one suspects. . . .

Some would argue that there is growing sentiment among liberal American Jews, particularly the younger ones, to dissociate from Israel and to condemn its behavior. To be sure this would appear to be true, and there are also numerous Jewish dominated “progressive” organizations that are highly critical of Israel’s current government. Many of them are astonishingly ineffective, suggesting that there is a certain ambivalence among the critics. This arises in part, I suspect, because they ultimately want to protect Israel as a Jewish state, only demanding that it somehow behave better and be nice to the Palestinians, but there is no likelihood that that will happen in the foreseeable future given the lack of any significant political party in Israel that would support such a development.

This process of rationalizing ultimately contradictory theses has been described as working from inside the Jewish bubble and is related to the politics of Jewish identity. Groups like Jewish Voice for Peace (JVP) do not really see themselves as Americans speaking to other Americans about the impact of Israel on the United States. Instead, they identify as Jews addressing worldwide Jewry over the issue of how to support Jewish supremacy in Israel/Palestine as a sine qua non of Jewish identity while doing what is necessary to avoid unpleasant consequences. The effect of this ambivalence from inside is corrosive, leading some to believe that Jewish gatekeepers will successfully misdirect grassroots movements like Boycott, Divestment and Sanctions (BDS) to make sure that they do no real damage to the Jewish state just as they have already hamstrung groups demanding an end to the Israeli occupation of the West Bank. . . .

Other groups like J-Street veer even further in the direction of compromise with Israeli interests, basically wanting a Jewish state that is less offensive to the international audience, with some kind of fantasy concordat with the Arabs that will make the issue of what kind of place Israel really is less visible. Some time ago, I attended a J Street sponsored talk by a retired Israeli general who was supposed to be of the “peace” party. His message: “Iran must be destroyed.”

I used to believe that educating the American public about what is really going on in the Middle East would bring about a change in policy. I don’t believe it any longer because Jews control the media and the message. As Peter Beinart puts it, “In part that’s because establishment Jewish discourse about Israel is, in large measure, American public discourse about Israel. Watch a discussion of Israel on American TV and what you’ll hear, much of the time, is a liberal American Jew (Thomas Friedman, David Remnick) talking to a centrist American Jew (Dennis Ross, Alan Dershowitz) talking to a hawkish American Jew (William Kristol, Charles Krauthammer), each articulating different Zionist positions.”

And beyond the media there is the heavy hand of the agitprop being disseminated by the Trump Administration. U.S. ambassador to Israel David Friedman, who recently tried to expunge the word “occupation” from the State Department language describing Israel’s colonization of the West Bank, claimed falsely last week that the Palestinians and their leadership are to blame for the lack of a peace deal with Israel. The statement by Friedman denounced Hamas for praising a drive-by shooting that killed an Israeli Rabbi in a West Bank attack. “An Israeli father of six was killed last night in cold blood by Palestinian terrorists. Hamas praises the killers and PA laws will provide them financial rewards.” Friedman said. “Look no further to why there is no peace.” Friedman supports the fanatical settler movement and has never expressed any sympathy for the far more numerous Palestinian children killed in the past two months by Israeli security forces.

It is undoubtedly true that an increasing number of Jewish American liberals have been troubled by the Israeli police state, which politically has tilted increasingly hard right. Even with an accommodating media, the Israeli refusal to end the occupation of the West Bank and the strangling of the open-air prison that is Gaza have been very visible and have made many question the state’s democratic pretensions. The military domination of a subject population also has a demographic downside in that the land controlled by Israel includes over 6.2 million Palestinian Arabs and about 6.5 million Jews. The Palestinian birthrate is higher than the Jewish birthrate and, in twenty years, Arabs will outnumber Jews in what might be described as Greater Israel, but it is now clear that Israel as it currently sees itself will never grant those Arabs equal rights or give up its attempt to completely dominate the region from the Jordan River to the sea.

Why is all this obsessing over the paradoxical behavior of Jewish liberals important? It is important because American Jews are hugely over-represented in the places that matter: in the media, in entertainment, in politics, in financial services, in the professions, in the arts and in education. It has been my own personal experience that some prominent Jewish critics of Israel resent identical criticism coming from non-Jews and tend to use their resources to marginalize it, frequently alleging that it is motivated by anti-Semitism. That means that the goyim will never be able to shift the press or congress or the White House about how awful the connection with Israel really is, no matter what we say or do, but as soon as Jewish American liberals get on board and convince themselves that they cannot stand any more of the lying about Israel change will come. It is all about Jewish power in America, but this time as a potential positive force. Guys like Jerry Seinfeld will have to figure out that performing in Israel and playing around for a laugh at their counter-terrorist indoctrination centers that simulate shooting Arabs is not exactly acceptable. We might even get Hollywood on board to produce an honest movie about the plight of the Palestinians.