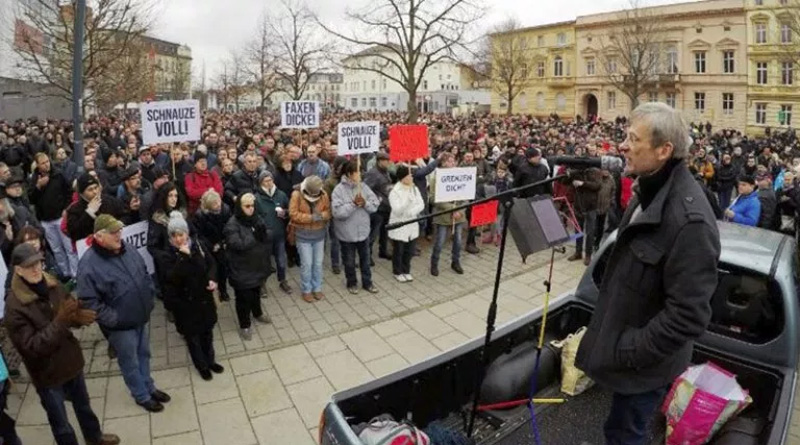 Following an increasing number of physical clashes between nonwhite invaders and Germans in two German cities, one of the affected towns, Cottbus in Brandenburg, has banned all “new refugees” from being “settled” in the town.

In addition, the town of Wurzen, located in the Free State of Saxony, two groups of young Germans and fake asylum seekers fought pitched battles over the weekend, resulting in two serious injuries, police said.

According to an article in the Frankfurter Allgemeine Zeitung (FAZ), there were renewed clashes over the weekend in Cottbus. An 18-year-old invader claiming to be a “Syrian refugee” attacked a German of the same age at a party in Cottbus on Saturday evening, police reported, sparking off a mass brawl. Two people were arrested after failing to comply with police orders to disperse.

A few hours later, another clash took place in the Cottbus city center between five Germans and “two unknown, foreign-looking persons,” police said. One of the nonwhites had sprayed an irritant gas at the Germans before fleeing, the police statement added.

A protest against the nonwhite invasion in Cottbus on Saturday was attended by around 1,500 Germans, many carrying signs reading “Schauze Voll!” (meaning “fed up”) organised by the “Zukunft Heimat” organization.

Earlier this week, Brandenburg state police reported that two male “Syrian teenagers” were arrested under the suspicion of injuring a German teenager in the face with a knife.

The 16-year-old sustained non life-threatening injuries in what started as an altercation between Syrian and German “school acquaintances” near a tram station.

The incident happened just days after a group of three Syrian asylum seekers, aged 14, 15 and 17 years old, attacked a man and his wife outside a shopping centre, according to a police statement. The 15-year-old was handed a “negative residency permit” by authorities, effectively ordering him and his father to leave the city.

Cottbus, a small university center with a population of just over 100,000, has taken in around 3,000 asylum seekers since German Chancellor Angela Merkel opened Germany’s borders in 2015 at the height of the refugee crisis.

On Friday, Brandenburg’s Interior Minister Karl-Heinz Schröter from the far left Socialist Democratic party (SPD) ordered that “for the time being no further asylum seekers” would be sent to Cottbus.

The city will also take further safety measures including increased video surveillance of a central downtown square, a larger presence of both uniformed and plainclothes police officers, as well as adding 10 new social worker positions throughout local schools.

Cottbus is not the first German city to impose a refugee ban.

Last year the towns of Salzgitter, Delmenhorst and Wilhelmshaven in the northern state of Lower Saxony implemented a prohibition, with local governments using the excuse that they “lacked the capacity and resources to properly integrate more new arrivals.”

The FAZ also reported on the violence which had started in Wurzen, where, it said, there had been “a violent confrontation between a group of Germans and a “group of foreigners” near the town’s railway station

Later, a larger group of Germans “stormed the asylum seekers’ shelter” sparking off further fights, during which three of the invaders were injured.