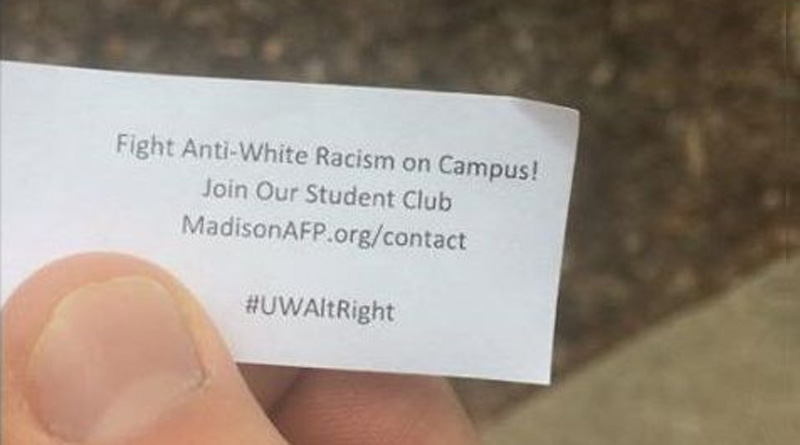 An outreach program led by a University of Wisconsin-Madison student and supported by the white nationalist American Freedom Party is attempting to recruit students to “fight anti-white racism on campus.”

The American Freedom Party, formerly known as the American Third Position, is a registered political party that is described as representing the interests and issues of white or European Americans. The party’s platform includes prioritizing white supremacy [where?] values and promoting a strong anti-immigration stance.

“The AFP attempts to appeal to a perhaps more independent or Libertarian demographic, in addition to white nationalists,” reads the Southern Poverty Law Center’s listing for the group.

According to the Madison-American Freedom Party’s website, the outreach program is to provide support for UW-Madison students “aspiring to understand, organize and lobby” against “college practices, policies and climate” deemed “hostile to students and faculty of European ethnic background and traditional values.”

Madison-UW sophomore and MadisonAFP coordinator Daniel Dropik is managing the program and formalized the Madison branch over winter break. After launching the website in the past week and starting to recruit, Dropik said he is getting membership requests but does not know how many.

“Predictably, some students are intolerant towards us, and seem determined to undermine us,” Dropik said in an email. “Other students are skeptical but willing to give us a chance.”

Though the Madison group models the American Freedom Party’s platform, Dropik said the university outreach component is more about supporting students than “obsessing over party orthodoxy.”

“My personal vision, is to empower students to leverage academic freedom and freedom of expression to intellectually challenge the dominance of so called ‘social justice’ ideology which has a power monopoly in Higher Education,” Dropik said in the email. “Students need to be reminded that they don’t have to be ashamed of whiteness, and that they can be producers of knowledge, not just consumers.”

Meredith McGlone, UW-Madison director of news and media relations, said that “group” is not an accurate description of MadisonAFP at this time.

“We’re aware of one individual,” McGlone said in an email. “This is NOT a registered student organization. We’re continuing to look into this and gather more information.”

Madison AFP recruiting materials use the hashtag “#altright” and “#UWAltRight.” The self-described “alt-right” movement is made up of far-right groups united by a belief that white identity is endangered by diversity. Groups tend to emphasize related rhetoric over traditional conservative positions such as limited government and low taxes. The term became widely known during President Donald Trump’s campaign, due to adviser Steve Bannon’s involvement via Breitbart.com.

A MadisonAFP recruitment video was removed from YouTube for violating the site’s hate speech policy, though Dropik posted it to Vimeo where it was available Wednesday morning. It is now unable to be viewed except on the MadisonAFP website.

Dropik also claims in the video his group could improve campus climate.

One thought on “‘Pro-white,’ ‘Alt-right’ Program Recruiting on Madison-UW Campus”