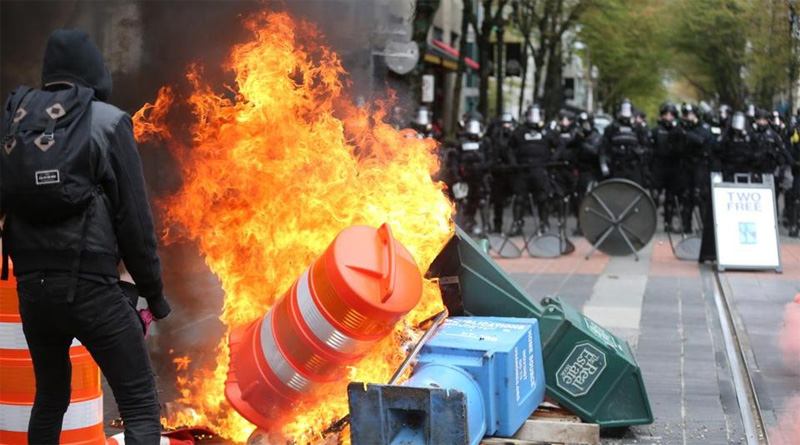 Protesters shattered business windows, set bonfires in the streets and vandalized a police car Monday afternoon in downtown Portland as a May Day protest devolved into a short-lived but chaotic riot according to the Portland Oregonian news.

The demonstration began as a city-permitted march featuring impassioned but peaceful rhetoric, but it ultimately was defined by black-clad protesters, fires and property damage. Ninety minutes into the march, police declared the gathering a riot. Officers used flash-bang grenades to disperse the crowd after they pronounced the march illegal, eventually arresting 25 people.

May 1 is International Workers’ Day, and protesters from the Philippines to Paris celebrated by demanding better working conditions. The holiday traditionally celebrates laborers’ rights but in recent years has expanded its focus in the U.S. to support immigrants.

The Oregonian/OregonLive generally doesn’t identify juveniles accused of crimes unless they’re tried as an adult or face Measure 11 charges.

Police ask business personnel and other people who think they’re victims of crimes to call a non-emergency number, 503-823-3333, or file a report online.

A common theme in the widespread U.S. was disapproval of the President Donald Trump, who in his first 100 days has intensified immigration enforcement by pushing for a U.S.-Mexico border wall and a ban on travelers from six predominantly Muslim countries.

In Portland, the afternoon began with a rally in the South Park Blocks, where speakers addressed about 1,000 people in Shemanski Park while a group of self-described anarchists gathered at a distance from the microphones.

One of the more than half-dozen speakers urged the crowd to support workers’ rights and unions. A Somali, Muslim woman encouraged people to continue fighting against racism, Islamophobia and other social injustices and to not lose hope.

Police at the periphery of the rally confiscated several sticks, poles and homemade shields — which were in sharp contrast to the more plentiful balloons, banners, costumes and props that otherwise filled the park. Some of the black-clad demonstrators burned small American flags.

Marchers set off after about 90 minutes, chanting as they marched south along the park blocks and turned toward the waterfront. Marchers remained mostly peaceful as they meandered past City Hall and the west side of the Justice Center.

But things turned violent as some in the crowd began throwing rocks and full soda cans at police while the mass moved north on Southwest 2nd Avenue.

Police in riot gear rolled in after the first objects were lobbed. Shortly after, police declared the assembly “unlawful” and warned that any marchers in the streets faced arrest.

The first of two main flashpoints came shortly after at Southwest 4th Avenue and Morrison Street, where demonstrators lit a large bonfire in the intersection using traffic cones, newspaper and brochure boxes, wood and a pallet. The blaze produced a plume of black smoke that rolled skyward next to a Starbucks and MAX tracks.

Officers rushed the scene, firing flash-bang grenades to disperse the crowd. The flames were quickly extinguished.

Police shortly after declared the demonstration a riot, saying protesters had vandalized a police car, were “attacking” officers and were vandalizing property.

Officers stymied the protest on the west side of City Hall about 10 minutes later, swooping in on protesters from the north and south and taking dozens into custody. 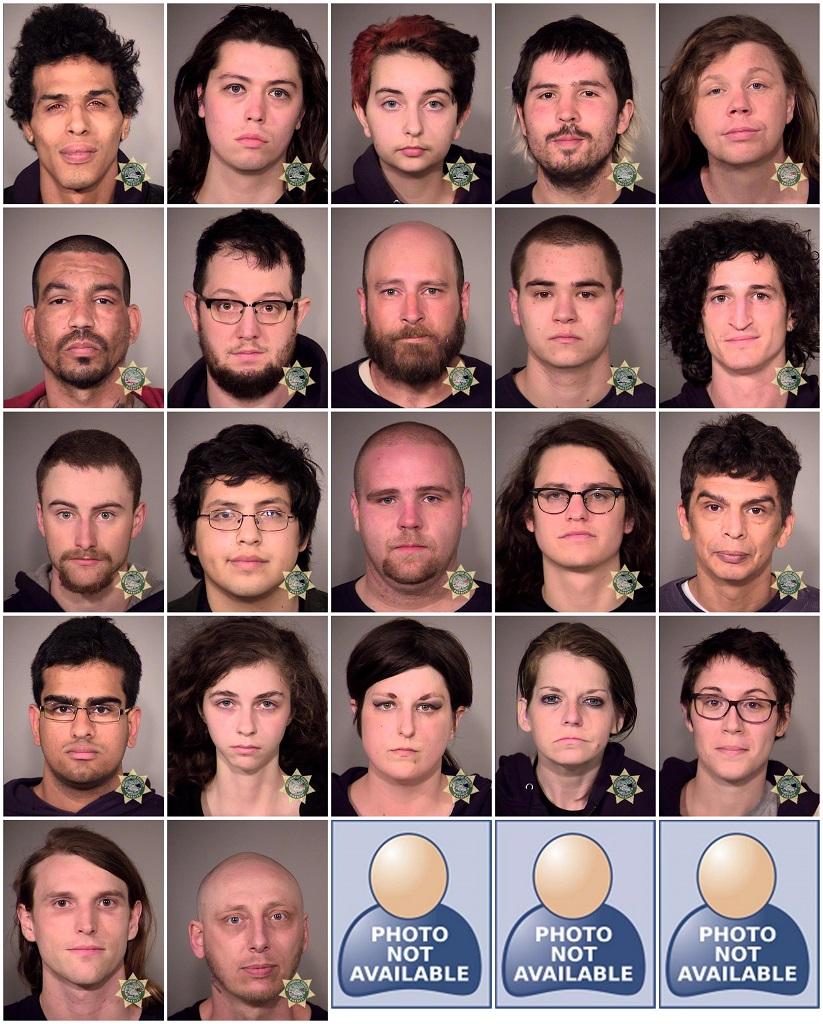 Twenty-two adults were arrested during the riot and three juveniles:

A rock was thrown through a window at Goldmark Jewelers, and protesters left a wall and other windows marred by graffiti.

“Why’d they have to do this?” said Kurt Thomas, the building security guard. “The owner’s a nice guy, not a corporate store at all.”

City Hall was also tagged with graffiti, as was the shuttered Macy’s building and other downtown structures. Someone scrawled “Kill Cops” on a Biketown rack, its bicycles’ tires slashed.

Police said in a news release Monday night that officers deployed “limited” amounts of less-than-lethal munitions during the riot.

“Unfortunately the actions of the law breakers undermined and covered up the message of the law abiding individuals who worked to peacefully get their message heard on May Day,” he said in a statement.

The Portland May Day Coalition, which organized the rally and march, didn’t immediately respond to messages seeking comment Monday evening. It did, however, address the day’s events on Facebook, saying in part that police “chose to violently escalate a peaceful march.”

The coalition, made up of almost 50 organizations, had released its march route and obtained a city permit for the event.

That route was followed only partway, never formally returning to the park where it began.

A separate group, called the Anarchist Student Union, vowed beforehand to join the event and “do our own thing.” It was unclear how many of the anarchists were among those arrested. But the vast majority of the hundreds — possibly thousands — of people assembled participated peacefully.

The 25 arrested include two 17-year-olds and a 14-year-old who each face riot charges, police said. They were released to parents, police said, and the other 22 people arrested were jailed.

Elsewhere in the U.S., peaceful protesters flocked to the streets in Chicago. At the White House gates, they demanded “Donald Trump has got to go!”

Three people in Seattle were arrested, one for hurling a rock as pro- and anti-Trump demonstrators faced off. In Olympia, police ordered protesters to disperse, calling them “members of a mob” as some threw bottles, used pepper spray and fired rocks from slingshots at officers. Two officers were injured and 10 people were arrested.

In Oakland, California, at least four were arrested after creating a human chain to block a county building where demonstrators demanded that county law enforcement refuse to collaborate with federal immigration agents.

Despite the West Coast clashes, most nationwide protests were peaceful as immigrants, union members and their allies staged a series of strikes, boycotts and marches to highlight the contributions of immigrants in the United States.

One thought on “Portland May Day March Erupts Into Fiery Riot; 25 Arrested”