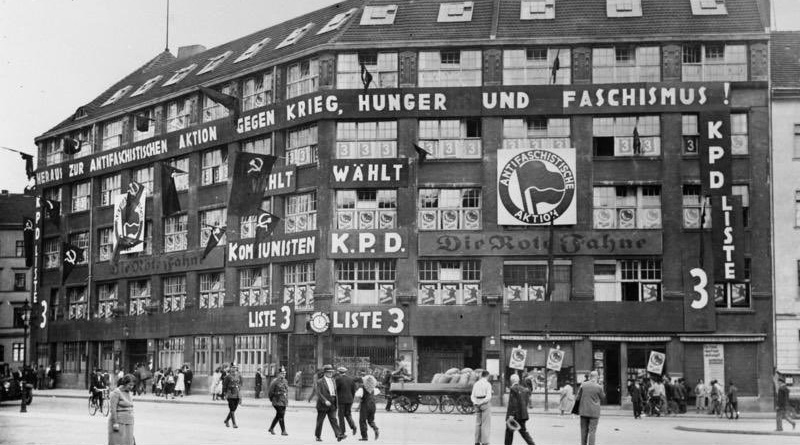 There are a few in the paleo-conservative and “Alt-Right” movements who harbor a certain wistfulness for National Socialism, no doubt because Hitler hated Jewish Bolshevism and wasn’t particularly shy about his dislikes.

Nazism is thus presumed to be not only hostile to communism, but in fact, anathema to it. While hating Jewish Bolshevism is certainly a worthy endeavor, with much to recommend it, this view embodies a flawed and romanticized perception of Nazi Germany.

Even as a student in the mid-1970s, I was struck more by the similarities than the distinctions between Nazi Germany and Soviet Communism. Confirmation of this viewpoint appeared in Nobel Laureate Frederich Hayek’s small but profoundly influential book, The Road to Serfdom.

Rather than seeing Nazism and Soviet communism as opposite ends of the political spectrum, Hayek viewed them as very close but inevitable manifestations of the same Marxist ideology, captured in Jean-Francois Revel’s expression, “the totalitarian temptation.”

Along with many other “Classical” economists, Hayek argued throughout his prolific career that there are really only two basic ways to organize a nation’s political economy: The central government is either organized to allow individuals to freely make the bulk of their own economic, social and political decisions, or else the central government is empowered to expro-priate such decision-making on behalf of its “serfs.”

No matter what labels happen to be assigned to various systems –- feudalism, socialism, communism, national socialism -– all are essentially the same “kettle of fish.” Only true republics and pluralistic democracies are qualitatively different in their organizing principles and behavior.

If a nation’s “liberty” is a measure of the sum of its individual freedoms, then the more freedoms a nation enjoys, the greater the liberty enjoyed by its citizens. Hence, by any objective criteria, both Nazism and Soviet communism were not only totalitarian, but also quite similar, with few meaningful distinctions between them.

In particular, Nazism and communism were identical in their contempt for Western traditions and political institutions, which both considered “decadent” and “bourgeois.” These included democratic principles, free plebiscites, and individual immunities from state power.

POLITICAL SPEECH: In both systems, there was a total subordination of the individual to the state, and neither permitted any freedoms of the press, freedom of speech, or freedom of association.

These liberties were conspicuously absent in the Soviet Union and Nazi Germany, both of which routinely banned or executed political rivals who spoke out or organized against the monopoly party.

RIVAL POLITICAL PARTIES: In both systems, the monopoly political party dominated all aspects of every social or political institution, as well as the administra-tion of the central government.

After it was damaged by fire in February of 1933, Hitler issued the Reichstag Fire Decree, which suspended most civil rights recognized by the Weimar Constitution. Later that July, Hitler formally banned all competing political parties by means of the Law Against the Establishment of Parties, and executed the leaders of most of them.

By the mid-to-late 1920s, Stalin began to use his Secret Police against rivals within the Communist Party, since the Bolsheviks had practically eliminated all other parties and their leaders by then. Soon thereafter, Trotsky, Zinoviev and Kamenev were denounced and expelled from the Communist Party of the Soviet Union (CPSU,) followed by Bukharin and many others in the “Great Terror” and “Show Trials” to follow in the 1930s.

Lenin and Stalin were equally vigilant in assassinating their political enemies and political rivals. During the “Night of the Long Knives,” in late June of 1934, Hitler had his SS and Gestapo assassinate Ernst Rohm, the SA leader, along with as many as two hundred others. Likewise, Stalin even ordered that assassins be sent all the way to Mexico in order to murder Leon Trotsky, his old Menshevik rival.

PLEBISCITES: Once the Bolsheviks and NAZIs came to power, there was never another free, fair or competitive plebiscite in either nation until their respective tyrannies ended.

Lenin dissolved the Constituent Assembly, which was elected soon after the Bolshevik Revolution: He did so a mere 13 hours after it was first assembled, because his Bolsheviks received only 25% representation after anticipating a majority.

Hitler did something similar in Germany by “packing” the Reichstag, and reconstituting its powers into a purely perfunctory and ceremonious function through the Enabling Act of 1933. Afterwards, the Reichstag’s members merely “rubber-stamped” everything Hitler did, and effectively legitimized his role as dictator.

INDEPENDENT JUDICIARY: Neither legal system was independent of the monopoly party, and both were mere extensions of the party-state and its policies.

By order of Hitler, a “People’s Court” was established in 1934 to prosecute “political” crimes, with death sentences the nearly universal outcome. Hitler appointed Roland Freisler as Presiding Judge, who learned his trade by attending many of the Soviet Union’s infamous Moscow “Show Trials,” in order to learn how such things are “properly” done.

Both Freisler in Germany and Chief Prosecutor Andrey Vyshinsky in the Soviet Union dispensed with many legal principles taken for granted in the West. Not only was there a presumption of guilt in both nations, but no defendant was permitted legitimate legal counsel, nor were they given an opportunity to present evidence of their own innocence.

In both systems, the verdict was pre-ordained and the resulting trials were merely pro forma. Cynics claimed that “the executions came first, and the trials came second.” ( Vyshinsky is also credited with having quipped, “Give me a man and I will find the crime.”)

STATE-SPONSORED PROPAGANDA: Both systems established a state-sponsored organ to disseminate political propaganda in order to indoctrinate its citizens and serve the party-state in other ways.

In the USSR, Glavlit (the Main Administration for Literary and Publishing Affairs) was established in 1922 and functioned until the Soviet system was dissolved in late 1991. Its purpose was to censor any information that might prove embarrassing to the Soviet Union, or which deviated from a strict Marxist-Leninist party-line. Its propaganda guided TASS and PRAVDA on a daily basis.

In 1933, Hitler and the NAZI Party established a Reich Ministry of Propaganda, and appointed Josef Goebbels to administer it. Its responsibility was to “soften-up” NAZI Party enemies and political adversaries, by denouncing them and accusing them of offenses against ethnic Germans.

SECRET POLICE: Both systems were infamous for the viciousness of their secret police, which enforced loyalty to the party-state. For the Soviets, this was originally the “Cheka,” although it acquired many names throughout its violent and bloody history, including the NKVD and the KGB.

For the NAZIs, it was the SS and Gestapo: Many of those arrested and spirited off to concentration camps originally fell under the authority of the Gestapo.

In the first half of the 1930s, the NAZI Party instituted a massive, nationwide seizure of weapons in the possession of anyone who happened to be a political enemy. As Hitler candidly stated, “The most foolish mistake we could make would be to allow the subject races to possess arms.”

This was followed by the “Waffengesetz” of 1938, which effectively banned all Jewish ownership of firearms, as a prelude to the mass deportation of Jews to concentration camps.

After the Bolshevik Revolution, the private possession of firearms by Soviet citizens was illegal. Retired military and retired police could apply to purchase a weapon, but permits were very rarely approved after a long and elaborate application process. According to one Russian author, this was done (paraphrase) “to prevent the peasants from shooting Chekists.”

EXPANSIONISM: Both systems adopted a state policy of expansion of its territorial boundaries at the expense of vulnerable neighbors. The two even found a common purpose in the Ribbentrop-Molotov Pact, their joint invasion and conquest of Poland in June of 1941.

The Soviet Union also annexed and enslaved dozens of smaller countries in the course of its brutal history. In addition to the Baltic States, they absorbed a half-dozen Islamic States, and many smaller Eastern European nations.

At Yalta, they were handed Eastern Europe by Alger Hiss, a high-ranking State Department official who was also a Soviet NKVD agent (codename “Lawyer,”) and GRU agent (codename “Mars,”) who made every signifi-cant decision at the Yalta Conference.

Likewise, Nazi Germany invaded and conquered Czechoslovakia, Norway, Poland, and annexed Austria. It also attempted to invade Britain, but was repulsed during the Battle of Britain.

CULT OF PERSONALITY: Nazi Germany and Stalin’s USSR were no different from any other Marxist dictatorship in establishing a “Cult of Personality.”

Stalin’s “cult of personality” became a prominent part of Soviet culture after an extravagant celebration of his 50th birthday in December 1929. For the remainder of his dictatorship, TASS and PRAVDA referred to Stalin as “all-powerful,” in addition to “all-knowing,” and “the Father of Nations.”

Stalin was routinely depicted in giant portraits, murals and statues, which were in evidence everywhere and always in the exaggerated ”socialist realism” style. When Khrushchev denounced the excesses of the Stalinist Era before the 20th Party Congress in 1956, he specifically singled-out Stalin’s “cult of personality.”

Hitler received much the same treatment from Joseph Goebbels and his Reich Ministry of Propaganda. Hitler was likewise depicted as a genius and infallible, and imbued with boundless energy and super-human insight.

In June of 1940, Stalin’s translator was in Berlin and witnessed a prolonged ovation Hitler received upon entering an opera house: As Valentin Berezhkov recalled in his memoirs:

As I am watching all that, I am thinking to myself… how much there is in common between this and our congresses and conferences when Stalin makes his entry into the hall. The same thunderous, never-ending standing ovation. Almost the same hysterical shouts of ‘Glory to Stalin!’ ‘Glory to our leader!’

These similarities are not some sort of coincidence which happened to make German National Socialism and Soviet Communism appear similar: These two systems shared a significant number of characteristics because such characteristics universally accompany ALL socialist dictatorships.

When Khrushchev denounced Stalinism at the 20th Party Congress –- initiating the era of “de-Stalinization” in the USSR — he specifically singled-out Stalin’s “cult of personality” as being “foreign to the spirit of Marxism-Leninism.” He could not have been more mistaken.

The cult of personality can be evidenced everywhere a Marxist or socialist dictatorship is established, whether Hitler’s Germany, Stalin’s USSR, Castro’s Cuba, Mao’s China, Ho Chi Minh’s North Vietnam, or any of North Korea’s dictators since the 1950s.

Nor were Africa’s Marxist dictators any different, whether Idi Amin in Uganda, Bokassa in the Central African Empire, or Robert Mugabe in Zimbabwe. All cultivated a similar “cult of personality” that imbued them with god-like wisdom, just as Stalin’s and Hitler’s propagandists had done.

While there may be a few nuanced characteristics not shared by both German National Socialism and Soviet Communism, on the other hand, the two had so many features in common that their similarities overwhelm any distinctions.

For this reason, it is inaccurate to look at these two systems as representing opposite ends of the political spectrum, and far more accurate to view them as slight variations from Marxism’s totalitarian template.

2 thoughts on “Nazis, Commies and “The Right””