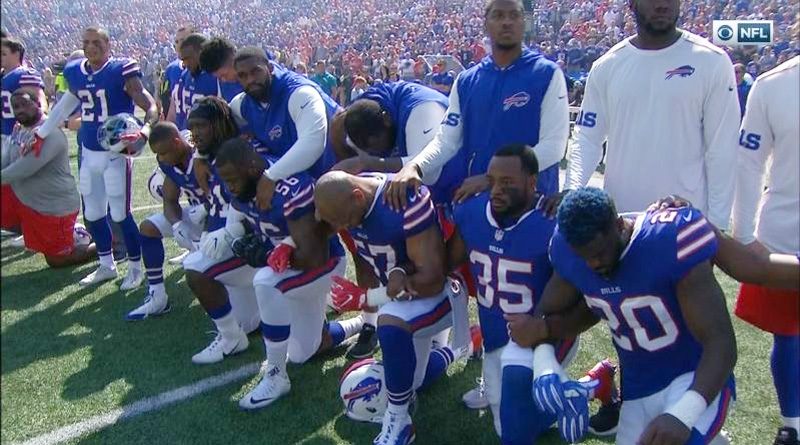 When immature and witless negro millionaires in the National Football League refuse to stand during the National Anthem, that’s not “disrespect.”

On the occasion when several of them have scored touchdowns and then made obvious gang signs to the End-Zone camera, that also was not an example of “disrespect.”

One even crawled across the End Zone on all fours after catching a touchdown pass, and then cocked his leg like a dog to pantomime urinating in the End Zone. Of course, that was not considered an example of disrespect.

After scoring a Touchdown a couple of years ago, another one pantomimed rubbing his black ass against the Goal Post as if he were wiping it. Needless to say, that was not an example of “disrespect,” either.

No, the whores in the Corrupt Leftist Media consider it “disrespectful” ONLY when the President of the United States calls out these empty-headed and immature black bastards for, figuratively, “showing their asses” by disrespecting the Flag and National Anthem.

The symbols of freedom these dilettantes disrespect represent the freedoms that millions have died defending over the past 241 years.

Those freedoms are what allow functionally-illiterate black ingrates the opportunity to be paid outrageous sums to play a game, instead of become chicken thieves, pimps, drug-dealers, burglars, auto thieves and the shoe-shine boys they would otherwise become, more commensurate with their level of intellect…