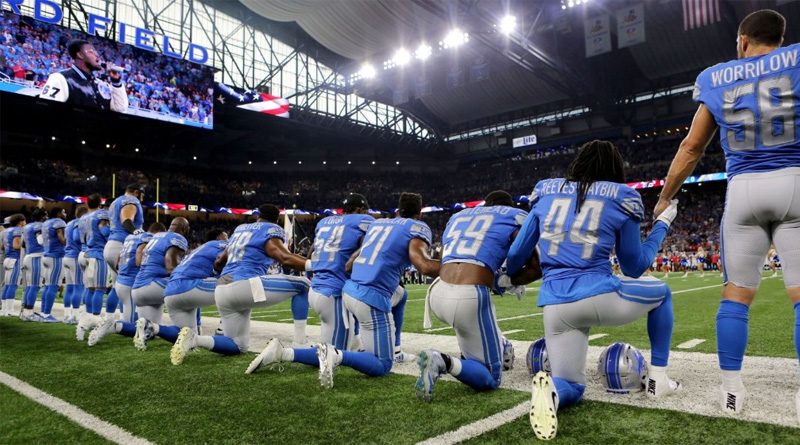 The refusal of many black NFL players to stand during the National Anthem is a drama that demonstrates two things: It reveals that the VAST majority of blacks are not loyal Americans in any meaningful sense of the word, and it proves that blacks are ultimately capable of destroying anything they touch.

It’s difficult not to laugh at black multi-millionaires carping about “oppression” by white America: They should emigrate to Uganda, Zimbabwe, Rwanda, or some other God-forsaken cesspool created by their African Brothers to get a good look at what oppression really looks like.

There, they could observe the kind of lifestyle they would have were it not for “oppressive” white America paying exorbitant sums to watch them play a game: They could become the chicken thieves, pimps, burglars, drug-dealers, auto thieves, vandals and shoe-shine boys the rest of their brethren usually become.

American blacks are not good Americans because they are synonymous with welfare, illegitimacy, crime and violent crime in particular. This is why they hate law enforcement so much: Police thwart their endless scams and the illicit activities that black “night-crawlers” engage in every day of their lives.

Half of all black males between 18 and 45 are either in prison, on probation, or on parole, and that statistic omits endless crimes committed by “juveniles” and all the criminal activity committed by those over the age of 45. Blacks are synonymous with crime, violence and predation in the United States.

Anywhere and everywhere blacks achieve a significant population, that particular industry, system, company or geographic entity is well on its way to utter ruin and destruction. They really can “screw-up an anvil,” just as they are well on their way to destroying the NFL.

A case in point are the antics of black NFL players, who have often made “gang signs” in front of End-Zone cameras, and also pantomimed urination, sex acts and defecating after scoring a touchdown. It is NOT white players who behave in such a witless, crude, and apish manner, it is exclusively nigroes who do.

Meanwhile, they have subverted and scammed the welfare system to the point that it has become a “career choice” for many, just as myriad Welfare Queens have cheated and lied their way into large but undeserved transfers of wealth from those who work. Welfare also provides the disposable income that allows many to be drug users and alcoholics.

By virtue of the fact that they are now a large percentage of all inmates in state prisons, they have turned our state penal systems into savage and violent places where rape is more common than bad breath. Even prison guards no longer feel safe in most state prison systems.

Likewise, practically every large urban area run by blacks is a violent and ungovernable catastrophe, with graft, embezzlement and mismanagement as common as that found anywhere in Black Africa. Their influence on public education in large, urban areas is no better.

Blacks have also ruined major college sports, where rape and violent assaults on fellow classmates are as common as illegal cash payments, and real functional literacy is more rare than Leprechauns.

They seem well on their way to destroying professional football, as well. Their childlike emotions, intellect and morality prevent them from recognizing how incredibly fortunate they are to be paid staggeringly large sums – often exceeding the incomes of the world’s most renowned surgeons — to play a game before adoring fans.

The very idea that blacks are “oppressed” would be laughable, were it not for the fact that so many mentally-defective blacks actually believe this is the case. Their fellow blacks who observe the law –- the rare 10% minority –- do not have problems with police, just as most white people do not. People who obey the law do not resent law enforcement, and rarely have much contact with them.

If you asked these fools why they feel the need to show disrespect to the Flag and National Anthem, few could give you a coherent answer. That’s ALWAYS the case with those on the left, because most are merely tools of communism in its on-going Culture War against America. Black NFL players are too stupid to know this…