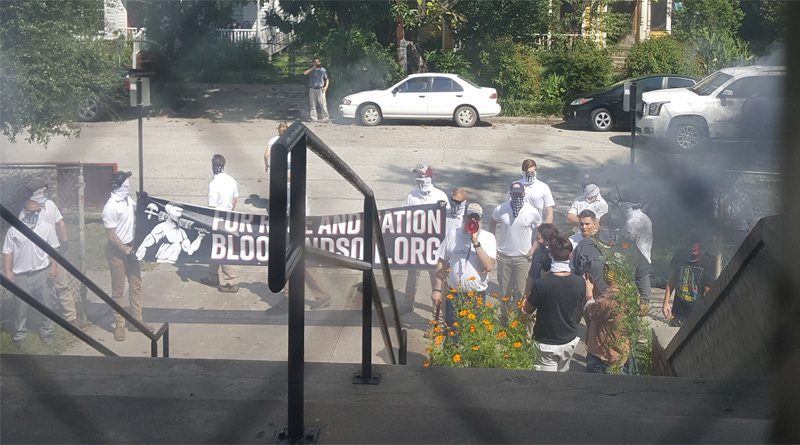 A group of white protesters — many of them masked — protested an event held by Houston Anarchists on Sunday at the MECA community center.

The confrontation took place at the Houston Anarchist Book Fair, a gathering of local anarchists billed as a chance to network and discuss anti-authoritarian projects across Texas.

Kit O’Connell said he began teaching a class on how to resist fascism (provocatively titled “Punching Nazis”) as part of the day’s scheduled events, at 11:15 a.m. Around 11:45, O’Connell said, about 30 men wearing white polo shirts and khaki pants — many with bandannas covering their faces — assembled outside the building. The men carried a banner that read “For Race and Nation” and included the address of a white supremacist website.

O’Connell said some of the men tried to enter the building, but attendees of the book fair held the door shut. O’Connell added that the white supremacists cajoled him to go outside and fight them, but he declined.

“Our first priority was to defend the community center,” O’Connell said, adding that the anarchists broke “all the mops and brooms in the building” to use as weapons in the event of a clash. O’Connell said there was a Houston Police Department cruiser nearby, but officers did not intervene.

The protesters chanted and lit flares. No physical confrontations occurred, and after about 20 minutes, the white supremacists left the scene and drove away, O’Connell said.

“This was an unpleasant and frankly terrifying event, but we didn’t let it interfere with the book fair,” O’Connell said.

The website The Daily Stormer on Sunday published an article stating that Texas white supremacists, joined by a Stormer contributor and prominent white supremacist known as Azzmador, went to the MECA community center to confront O’Connell and the anarchists. Instead of clashing with the protesters, the site reported, the “communist faggots instead just locked the doors and cowered in fear.”

In a livestream of the event posted online, Azzmador specifically mentioned O’Connell as a target of the protest.

Azzmador and a group of white protesters — similarly clad in white polo shirts and khakis — also attended a June rally in support of the Sam Houston statue in Hermann Park, but were not welcomed by the event’s organizers.

Asked about Sunday’s protest, Houston Police Department spokesman Victor Senties said it is routine for officers to monitor rallies and demonstrations, and said he was unaware of any protest-related arrests over the weekend.

Calls to MECA went unanswered Tuesday afternoon. O’Connell said the anarchists replaced the brooms and mops they had destroyed.