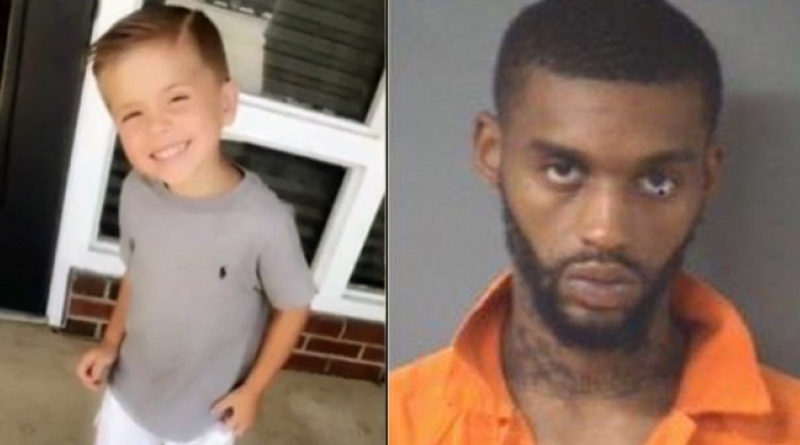 Child brutally murdered by Black man after riding his bike on felon’s property.

Mainstream news networks CNN, MSNBC, ABC and CBS have completely ignored the story of Cannon Hinnant, a 5-year-old boy who was shot in the head by an African-American male in North Carolina, with search queries on all of their websites returning no results.

Hinnant was brutally gunned down by 25-year-old felon Darius Nathaniel Sessoms while riding his playing outside his house in Wilson, North Carolina for the ‘crime’ of riding his bike on Sessoms’s property.

The shocking murder was witnessed by a neighbor and Hinnant’s two young sisters, aged 8 and 7.

A motive for the killing has not been established, although it was reported that, “Sessoms lives next door to Cannon’s father, and a neighbor said that the two men had dinner together Saturday night and that Sessoms was at his neighbor’s home earlier Sunday.”

Sessoms was caught by members of the U.S. Marshals Service Carolinas Regional Fugitive Task Force, Goldsboro police and the Wayne County Sheriff’s Office and faces a charge of first-degree murder.

Although the story has been covered by local news networks and nationally by Fox News, it appears nowhere on the websites of the other big four national media networks.

Darius Sessoms—a black man, went up to Cannon Hinnant, a 5 year old white boy and murdered him in cold blood in front of his 2 young sisters

If the races were reversed it would be national news

While America has been transfixed by over two months of violent protests and riots over the death of George Floyd, a convicted criminal who died at the hands of police while high on Fentanyl, press coverage and outrage over the death of Hinnant has been minimal in comparison.

Almost like the media has some kind of agenda and ignores stories that don’t fit their narrative.

“Cannon’s life mattered!!!” wrote Heather Morgan on Facebook. “My 3 yr old grandson says to me ‘Mimi, I miss Cannon so much. Why did he have to be in that road Mimi? I just want to play with him.’”

It obviously didn’t matter that much to CNN, MSNBC, ABC News or CBS News.