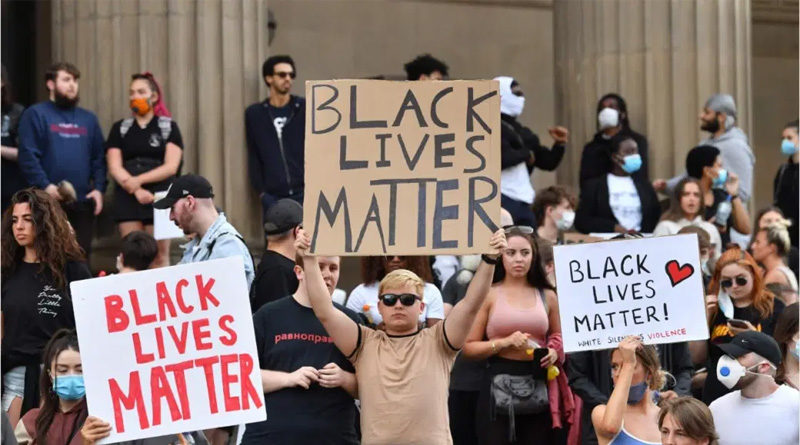 If Peter Thiel isn’t truly gay because he supported Donald Trump; if Kanye West isn’t truly black for the same reason; if Germaine Greer is no longer a feminist for saying that some sexual assault is maybe just “bad sex” and that transgender women are “not women”; is it a bridge too far to ask if white people who actively support BLM are really white? (Reveal: I don’t think so.)

The scholar who said that Peter Thiel cannot be gay–one James Downs, a history professor at Connecticut College–argued thusly: “By the logic of gay liberation, Thiel is an example of a man who has sex with other men, but [is] not a gay man, because he does not embrace the struggle of people to embrace their distinctive identity.”

The attacks on Kanye were less courtly. “You supporting Trump, bruh? What the fuck wrong with you, bruh?” asked rapper Soulja Boy.

That’s what happens when a black man in a MAGA hat strolls off the Democrat plantation. In short order Kanye was the subject of a social media lynching. Give progressives enough rope and they’ll hang you. Even his former close friend John “Simpering” Legend whined that Kanye had “betrayed” him by continuing to support Trump.

As for the treatment of Germaine Greer: Hell hath no fury like feminists scorned.

These developments, pursued to their illogical conclusions, raise an existential question: Are white people who support BLM really white? (Hint: I don’t think so.) Are they part of the struggle of people to embrace their distinctive white identity or is that white identity, to them, the real white man’s burden?

Rosanna Arquette certainly believes it is. The “Pulp Fiction” actress, 60, confessed on Twitter last year, “I’m sorry I was born white and privileged. It disgusts me. And I feel so much shame.”

If you want an example of white self-loathing closer to home, consider my former next-door neighbor. After the Election of 2016, this Radiohead-loving fool wrote on his Facebook page, “How will I look my child in the eye when he grows up, and explain this election to him? I am so beyond ashamed of my country right now.” (Did I mention that this dude and his wife, also white, are the proud “parents” of a trendy baby of color?)

People like Rosanna Arquette and the joke who used to live next door are WINOs (white in name only). They look white, they act white, they often live in virtually all-white neighborhoods, yet beneath their pass-for-white exterior they are not their own best friends (or ours). In a piece entitled “The toxic self-hatred of white Democrats,” writer Justin Webb observed on the UnHerd website that white Democrats are horrified “by themselves: by the colour of their skin; by the wrongs done by white people and by the system they set up.” (Besides, they can’t jump, they dance funny, and they look stupid in hoodies.)

When that kind of self-hatred builds up, it’s gotta boil over somewhere. For many WINOs the safety valve is their rabid support of BLM. A Free West Media report from June this year informs: “Majority BLM protesters are white Democrats.” That’s majority as in 46% to 17% by self-reported attendance at a BLM function, according to Pew Research.

We have met the enemy and s/he looks just like us, dammit. That’s scary, but the big-ass-scary part is this: when we subtract the number of WINOs from the percentage of white Americans (60 percent), those of us who are truly and comfortably white, who are OK with Western Civ and would seek to preserve it, who show up excessively early for events, and who are always vowing to learn a new language . . . we realize just how outnumbered we are in this strange and trending-stranger country where we now live under house arrest. Last one out, turn off the lights, if they’re still working.