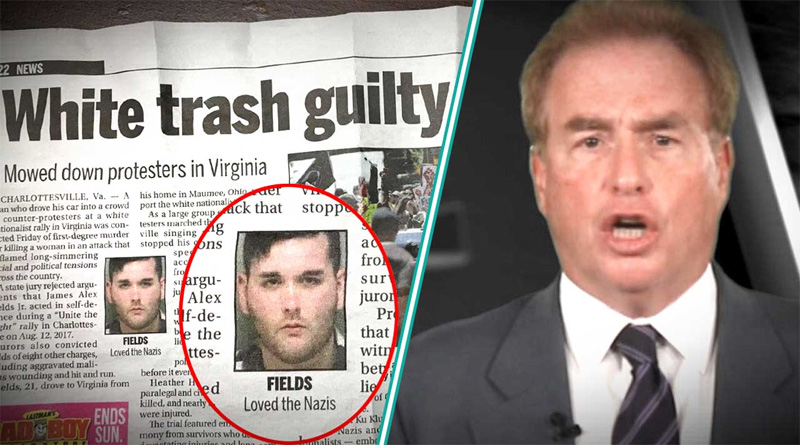 David Menzies of The Rebel.Media reports:

It seems there’s a different set of race-based rules when it comes to the media and public figures using negative descriptors for bad guys because apparently, calling violent criminals “sewer rats” and “cockroaches” is offside; but if a criminal is Caucasian, feel free to use the term “white trash.”

Last month, I came across a story about James Alex Fields Junior being convicted of first-degree murder for killing Heather Heyer at that infamous Charlottesville rally back in 2017 with a headline that read, “White trash guilty of murder.”

To be perfectly clear, I’m not offended by the headline. Fields is a murderer — a Nazi-loving coward that used his car to kill a woman. He deserves the death penalty and I’m not going to bat for this despicable man.

But, I am curious about the racially-charged descriptor “white trash” in the headline.

Consider how two Toronto politicians were vilified last year by the usual suspects for referring to gangsters as “sewer rats” and “cockroaches.”

In what was Toronto’s most murderous year on record, Mayor John Tory used the term “sewer rats” to describe two men who had wounded two innocent young girls after firing their handguns in a park. Tory had no idea of the race of the gunmen when he made the comments but was still deemed “racist.”

A few weeks later on this show, Toronto City Councillor Giorgio Mammoliti caused outrage due to comments he made about convicted criminals who are allowed to stay in the city’s taxpayer-subsidized housing units.

Mammoliti referred to all criminals living in social housing as “cockroaches” – not just visible-minority criminals yet he was nonetheless condemned as racist even though race was irrelevant.

Clearly, we have two sets of rules when it comes to applying racial slurs to criminals thanks to progressives.