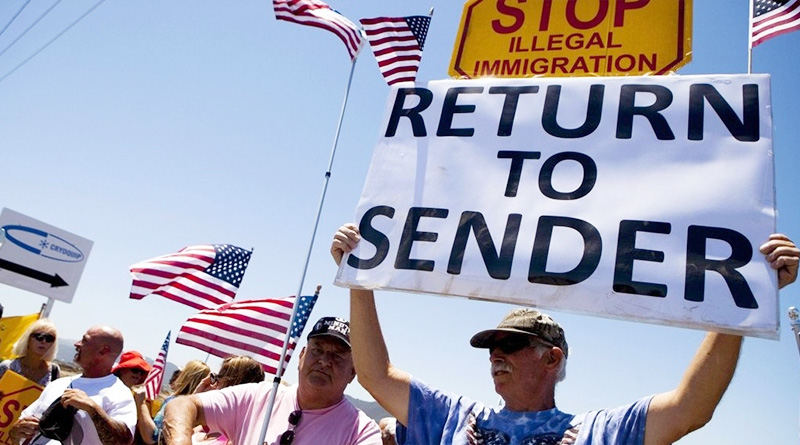 Illegal aliens are quietly being redistributed across the country on private flights paid for by US taxpayers.

The illegal aliens were seen boarding planes this past week in Harlington, Texas and Tucson, Arizona.

Barack Obama was notorious for shuffling illegal aliens around at night by bus and air.

Immigrants entering the United States illegally through the southern border are quietly being relocated to different parts of the country on commercial flights, high-ranking Homeland Security officials told Judicial Watch this week. In the last few days alone, groups of illegal aliens boarded planes at airports in Texas and Arizona accompanied by a taxpayer-funded government escort in civilian clothes to avoid drawing attention. The first flight originated at Valley International Airport in Harlingen, Texas and was bound for Minneapolis. The second left from Tucson International Airport and arrived in Salt Lake City, Utah, federal sources said. In both locations the illegal aliens appeared to be in their late teens and were escorted by a Health and Human Services (HHS) chaperone. Judicial Watch reached out to HHS for comment but did not hear back from the agency.

The illegal aliens wear red HHS wrist bands and receive “the gold glove treatment,” according to a veteran federal official, who added that the undocumented immigrants get priority boarding ahead of all other passengers, including law enforcement personnel. “It is shameful and dangerous,” said a seasoned Homeland Security agent with direct knowledge of the secret operations. Labor personnel from front-line Department of Homeland Security (DHS) agencies have complained about the cost and security risk of flying illegal alien minors to any destination of their choosing within the U.S., according to a longtime Immigration and Customs Enforcement (ICE) official present at the meetings. One of the closed-door meetings, late last year, included President Donald Trump and his chief of staff, John Kelly.

It appears that the Trump administration has chosen to ignore the concerns of rank-and-file federal agents, instead opting to quietly extend the controversial Obama-era policy that relocates illegal immigrants to unsuspecting communities nationwide. It is known as “Catch and Release” and frustrated DHS sources tell Judicial Watch the Trump administration is essentially facilitating the ongoing commission of a federal immigration crime despite its tough border security rhetoric.