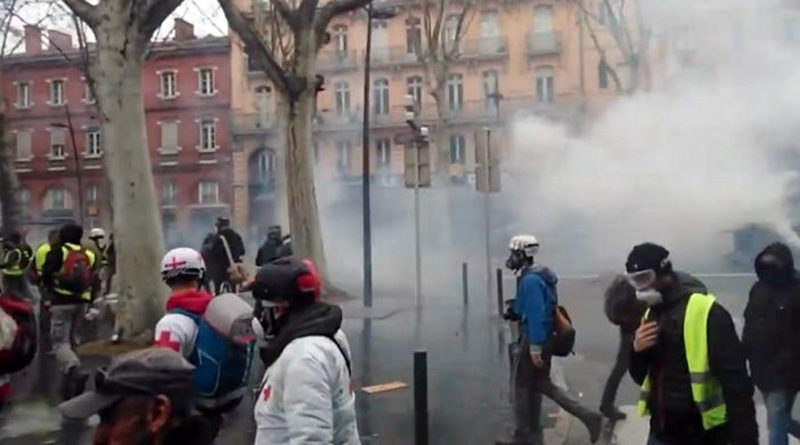 A Nativity play in the French city of Toulouse had to be cut short after a mob of fifty anti-Christian, far-left militants insulted and attacked the event’s participants and spat on a priest.

The anti-Christian attack occurred on Saturday, December 14th at the Place Saint-Georges living nativity scene. The performance had been organized to celebrate the traditional spirit of Christmas and to emphasize the non-consumeristic aspects of the holy day, Infos Toulouse reports.

The celebration was quickly interrupted by a mob of 50 so-called “anti-fascists” who hurled vicious insults at the event’s crowd, participants, and priests while they shouted anti-Christian slogans. Members of the far-left group argued “that the event was illegal” because France is a secular state.

As a result of the attack, organizers were forced to shut the event down and to evacuate the frightened children.

One demonstrator allegedly forced his way into the square before he filmed himself attacking and spitting on a priest. After the rabid attacker was forced to leave the scene, he later came back and physically attacked a journalist, throwing his camera on the ground and breaking it. Eventually, event security forcibly removed the man.

Archbishop of Toulouse Monseigneur Le Gall, condemned the anti-Christian attack in a press release, writing: “This joyful manifestation during which Christmas carols are sung, Nativity scenes played by children and adults, helped by multiple animals, has no other purpose than to give depth to this celebration. As Arch Archbishop of Toulouse, I regret that the simple reminder of the birth of Jesus and the values ​​that it conveys (welcoming from abroad, announcement of Peace and sign of tenderness that we all need) is no longer respected in our country and even provokes acts of verbal and physical violence from those who set themselves up as defenders of freedom. I invite everyone to peacefully defend freedom of expression and to respect the history and traditions of our country.”

Sadly, anti-Christian attacks in France have become commonplace. Earlier this year in March, Voice of Europe reported on a string of attacks in France which saw historic Catholic churches desecrated, vandalized, and set ablaze. Anti-Christian militants have torn down crosses, smashed statues, knocked down tabernacles, and have destroyed the Eucharist, among other horrific acts.