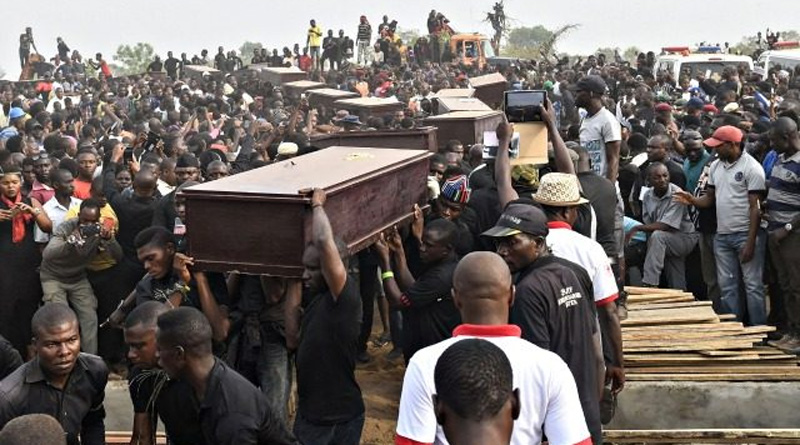 Political leaders and public figures were falling over themselves this weekend to condemn the mosque attacks in New Zealand, while dozens of Christians were slaughtered by Muslims in Nigeria to the sound of crickets.

The mosque attacks were indeed a horrific affair and worthy of universal condemnation. Presidents, prime ministers, royalty, and religious leaders rushed to extend their condolences to victims and their families — as well they should — while decrying the hate that purportedly motivated the shootings.

Without exception, the mainstream media gave top billing to the shootings, with newspapers carrying the story on their front pages and television news channels leading off their broadcasts with the story.

The bizarre aspect of the coverage was not, in fact, the attention paid to a heinous crime committed in New Zealand, but the absolute silence surrounding the simultaneous massacre of scores of Christians by Muslim militants in Africa.

As Breitbart News alone reported among major news outlets, Fulani jihadists racked up a death toll of over 120 Christians over the past three weeks in central Nigeria, employing machetes and gunfire to slaughter men, women, and children, burning down over 140 houses, destroying property, and spreading terror.

The New York Times did not place this story on the front page; in fact, they did not cover it at all. Apparently, when assessing “all the news that’s fit to print,” the massacre of African Christians did not measure up. The same can be said for the Washington Post, the Chicago Tribune, the Detroit Free Press, the LA Times, and every other major paper in the United States.

The news shows from the three major television channels did not mention the story, and nor did CNN or MSNBC.

There are several possible explanations for this remarkable silence, and none of them is good.

Since, in point of fact, Muslim radicals kill Christians around the world with alarming frequency, it is probable that one more slaughter did not seem particularly newsworthy to the decision-makers at major news outlets. Muslims being killed, on the other hand, may strike many as newsworthy precisely because it is so rare.

A second motive for the media silence around the massacre of Christians in Nigeria may be geo-political and racial. New Zealand is a first-world country where such things are not supposed to happen, whereas many people still consider Africa to be a backwards place where brutal killings are par for the course.

Moreover, the slaughter of black Christians in Africa may not enkindle rage among westerners the way that the murder of white and brown Muslims in New Zealand would.

Finally, the story simply does not play to the political agenda that many mainstream media would like to advance. How much mileage can be gained from Muslims murdering Christians, when Christians in America are often seen as an obstacle to the “progress” desired by liberals? The left sees Christians in the United States as part of the problem and seeks to undermine their credibility and influence at every turn rather than emboldening them.

Anti-Christian bias has been rightly called “the last acceptable prejudice,” one that few bother condemning.

“No one much cares about offending Christians,” wrote the coalition of African-American pastors in an essay last Tuesday. “In fact, mocking, belittling, and blaspheming Christianity is becoming a bit of a trend in our culture. Anti-Christian bigotry truly is the last acceptable prejudice.”

“The hypocrisy on display is astounding,” the pastors continued. “Christianity is the dominant religion of our country. It is the foundation of our government and morality. And yet, Christians are treated as fair game for mockery and insult.”

Christians are by far the most persecuted religious group in the world, but the mainstream media routinely ignore this fact as if it were unimportant or uninteresting. As a result, many people do not even realize how widespread the persecution is or that 75 percent of the victims of religious persecution around the world are Christians.

Whatever the reason — or reasons — for the media silence surrounding the most recent massacres of Christians in Nigeria as well as numerous other such events, it should give right-thinking people pause.

By all means, the lethal shootings of dozens of Muslims in New Zealand is a massive story and merits extensive coverage. But it only stands to reason that similar coverage should be devoted to the slaughter of Christians.

For the moment, it serves as a poignant reminder that a double standard is at work when it comes to news coverage, and that it is Christians who inevitably draw the short straw.