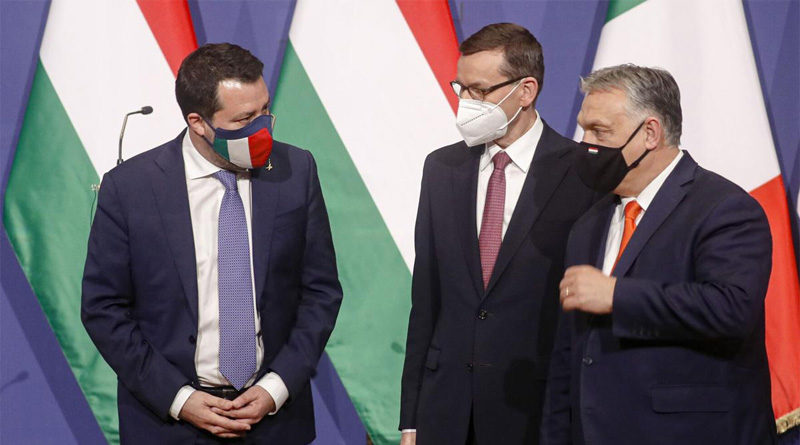 They met in Budapest on Thursday to introduce the alliance, vowing to create a “European renaissance based on Christian values”.

They also discussed the distribution of coronavirus vaccines among EU member states and urged the European Commission to increase the pace of purchases.

The alliance follows the decision of Orban’s Fidesz to quit the centre-right European People’s Party (EPP), the largest group in the European Parliament, over disagreement around the rule of law.

The trio will meet again in May, most probably in Warsaw, Orbán explained, with the exact date dependent on the epidemiological situation.

For the time being, the leaders will not create a new political group inside the European Parliament using the 64 seats their parties hold together (28 from the League, 24 from PiS and 12 from Fidesz). The rules of the hemicycle mandate that at least 25 MEPs from seven different states must be represented in order to form a group.

The three politicians, together with France’s Marine Le Pen, are often portrayed as the leading figures of right-wing populism in Europe.

Both Orbán and Morawiecki head right-wing governments, whose legislation has been often criticised by the European Commission and the European Parliament for its anti-liberal and authoritarian drift. Just this week, the Commission referred Poland to the European Court of Justice to protect the independence of Polish judges.

Salvini’s position is more difficult. His League party is one of several underpinning the new coalition government of Prime Minister Mario Draghi, an avowed europhile who is leading the southern country as a technocrat. After League voted in favour of the banker during the investiture vote, the party earned three ministerial positions, although Salvini didn’t enter the cabinet.

Ever since Draghi rose to power, Salvini has been promoting a more EU-friendly discourse, going as far as saying “we have hands, feet, heart and brain in Europe”. The latest turn of events is set to cast serious doubts on this new image.

Conspicuous by her absence in Budapest was Le Pen, leader of the French party Rassemblement National (RN). Unlike the other three parties, Le Pen’s RN is neither leading nor part of any national government. Le Pen herself is currently a member of the National Assembly and has announced her intention to quit as party leader.

Back in 2019, Orbán expressed his disdain towards Le Pen and declined to form an alliance with her. “She’s not in power. When political leaders are not in power, they can say and do whatever they want. They can lose control. I don’t want to be mixed up in any of this,” the PM told The Atlantic.

For years, Fidesz was one of the most prominent members of the EPP group. This membership helped Orbán develop a close and strategic relationship with German Chancellor Angela Merkel, whose CDU party has always been the leading delegation inside the conservative bloc.

But Fidesz’s relationship with the EPP became strained over Orbán’s stance on issues such as the rule of law, press freedom and human rights, all considered to be running contrary to so-called European values.

The tension led the EPP to suspend Fidesz as a member in March 2019. The decision deprived Orbán’s colleagues of party meetings, speaking time, voting rights and candidacies for posts. Discord grew as Hungary drifted further to the right.

The internal battle came to a boil in late 2020, as MEPs pushed to make receiving money from the EU’s €1.8 trillion budget and recovery fund conditional on a country respecting EU values. The move was opposed by the prime ministers of Hungary and Poland, who ended up vetoing the whole financial package. A compromise was later found.

The dispute was the final straw for the EPP. In early March, the group was ready to change its internal rules in order to penalise entire political parties rather than just individual MEPs. Anticipating his doomed fate, Orbán chose to quit the EPP altogether before being pushed.

As a result, 12 MEPs from Fidesz are now non-inscrits (non-attached), meaning their standing in the European Parliament has been significantly decreased. Non-attached members are much less likely to be appointed to parliamentary committee or as rapporteurs for important legislative files. They receive less speaking time during plenary and their budget is allocated directly by the parliament’s secretariat.

For his part, Morawiecki hails from Poland’s ruling Law & Justice party (PiS), which has 24 MEPs inside the European Conservatives and Reformists (ECR) group, a eurosceptic formation created in 2009 at the initiative of the British Conservative Party. ECR now encompasses lawmakers from, among others, the New Flemish Alliance (N-VA), Brothers of Italy (FdI) and Spain’s Vox.

Salvini, who used to be a European legislator himself, represents League (Lega), whose 28 MEPs sit with the Identity and Democracy (ID) group. The bloc, formed in 2019, is generally seen as the most far-right group in the European Parliament and hosts representatives from Alternative for Germany (AfD), Flemish Interest (VB) and Le Pen’s Rassemblement National (RN).

Differences of opinion
Despite the show of unity and fraternity between Orbán, Morawiecki and Salvini, the ideologies they advocate are not completely compatible, with several issues, such as relations with Russia, representing a potential source of discrepancy.

“Beyond the statements, which have to be made by politicians to make things look more dramatic, I think we will see this group objecting to some of the decisions taken in Brussels, especially when it comes to identity and issues, cultural issues, when it comes to rule of law, which most of the parties in this group would have issues with,” Doru Peter Frantescu, co-founder and CEO of VoteWatch Europe, told Euronews.

“Foreign policy is an issue which we can expect to drive on edge between these parties. And let’s see if they manage to reach a compromise, especially when it comes to the relations with Russia, where the Polish and the Hungarians have very different views on the matter, at least for the time being,” he explains.

Warsaw is one of the fiercest critics of Moscow inside the bloc. Meanwhile, Budapest prefers to follow a more conciliatory approach, something that Salvini’s League has also defended.

The Hungarian government purchased thousands of doses from Sputnik V, Russia’s home-grown anti-coronavirus vaccine, which critics say Moscow is using as a propaganda tool. The jab has a 91.6% efficacy rate, according to results published in The Lancet magazine.

But Frantescu doesn’t think Russia will be the only reason for disagreement.