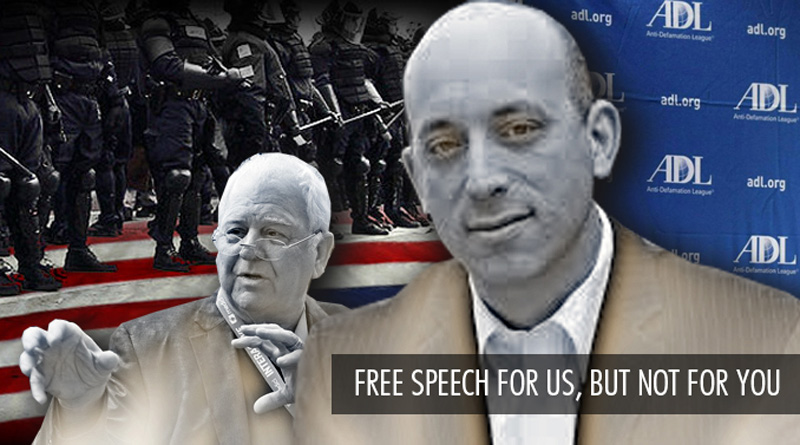 The Anti-Defamation League (ADL), an organization openly hostile to the First Amendment that seeks to advance pro-Israel interests and shut down free expression with often baseless charges of “anti-Semitism,” has partnered with the United States Conference of Mayors in the wake of the Unite the Right rally in Charlottesville, Va. in an effort to combat “hate” and “extremism,” Marxist buzzwords that are applied to patriotic Americans willing to buck the tyrannical system of political correctness plaguing the West. The United States Conference of Mayors is an official, non-partisan organization representing American cities with populations exceeding 30,000. More than 300 mayors from major American cities across the nation have collaborated with the ADL on the project, and have pledged to implement the 10-point Mayors’ Compact to Combat Hate, Extremism, and Bigotry, developed almost entirely by the subversive, anti-American organization.

Read: ADL and Partners Launch Initiative to Combat Extremism in Cities Across the U.S.

Some of the 10 key initiatives outlined in the compact include “rejecting extremism, white supremacy, and all forms of bigotry,” as well as prioritizing and promoting “anti-bias” and “anti-hate” programs—which are also developed by the ADL—in America’s public and private schools. Additionally, the compact encourages local residents and community members to report “hate incidents”; seeks to strengthen “hate crime” laws; and promotes training for law enforcement officials across the country to respond to and deal with “hate.”

The compact represents an attempt by the ADL to institutionalize its subversive, anti-free speech agenda, a major and long-running goal of the anti-American organization. The Unite the Right rally, which was legally organized by leading members of the alt-right, a burgeoning, loose-knit, right-wing movement that embraces racial identity and populism while rejecting globalism, multiculturalism, and massive non-white immigration to America and the wider Western world, has been used as an excuse to advance a number of blatantly anti-free speech agendas, including the censoring of some alt-right commentators on the Internet.

The rally was legally permitted, yet faced enormous obstacles from local political leaders in Charlottesville. The entirely distorted narrative spun by the political and media establishment portrayed the altright organizers and supporters as hateful, racist bigots who were determined to violently confront and attack the counterprotesters who showed up to peacefully demonstrate against the rally. The fake news media and establishment political and media pundits hysterically condemned everyone in the altright as violent extremists and terrorists, white supremacists, neo-nazis, and even Ku Klux Klansmen. Meanwhile, Antifa and other leftist extremists who engaged in physical confrontations and violence against the alt-right were portrayed as righteous and honorable protesters simply attempting to exercise their First Amendment rights. Needless to say, the concept of “hate” will be defined by the ADL and will, of course, encompass any form of criticism or resistance to its subversive, antiAmerican agenda.

“What happened in Charlottesville . . . reminds us all that violent hate and racism are very much alive in America in 2017,” Tom Cochran, the CEO and executive director of the U.S. Conference of Mayors, said when the compact was announced. “For decades, America’s mayors have taken a strong position in support of civil rights and in opposition to racism and discrimination of all kinds. At this critical time mayors are doing so again through this compact in an effort to combathate, extremism, and bigotry in their cities and in our nation.”

Law enforcement officials at all levels of government also regularly travel to Israel to receive training and advice from their Israeli counterparts, particularly in the wake of the 9/11 attacks, which many prominent researchers believe the Zionist state played a central role in carrying out, further militarizing American law enforcement, as is the case in Israel. This often involves U.S. law enforcement working closely with the Israeli military and police, both of which have been accused of carrying out war crimes against Muslims and Christians in the Holy Land.

Interestingly, Anita Gray, a regional director for the ADL in Cleveland, Ohio, admitted in a revealing interview with Cleveland Jewish News shortly after the rally that her organization had been “working on the ground and behind the scenes leading up to, during, and after the rally” in Charlottesville. “We remain in close contact with law enforcement, elected officials, community leaders, and others and continue to provide critical research, resources, and community support,” Ms. Gray went on to explain. “All of our offices have been working around the clock to respond, inform, and take action.”

The insidious agenda of the ADL could not be clearer in the aftermath of the Unite the Right rally, i.e., to stamp out criticism of Israel.