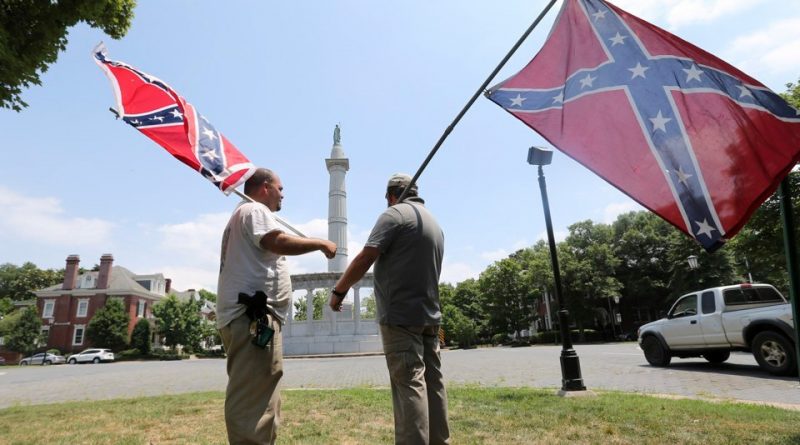 The black obsession with Confederate Icons is nothing but a patently obvious diversionary tactic. With their allies in the Corrupt Leftist Media and whorish, cowardly public officials, their political grave-robbery is intended to divert attention from the glaring and profound failings of blacks, themselves.

These race-hustlers would have us believe that southern historic symbols are somehow the cause of their seemingly endless problems. Being the children they are, they never bother to look inwards for the true sources of their failings, and always seem compelled to blame their shortcomings on external forces.

For example, if they are to be believed, it isn’t violent black crime that has reached a level of crisis in the U.S., it is racist law enforcement that has become the “real” crisis.

Similarly, the “sub-prime” mortgage crisis was not the fault of irresponsible black deadbeats — who never bothered to make their loan payments — it was caused by “predatory” banks, that bent over backwards to waive normal credit safeguards in order to give blacks low-interest loans.

Likewise, high rates of cigarette and alcohol consumption in black areas are not caused by low character or the absence of self-discipline, they are caused by “predatory” advertising campaigns by manufacturers of such legal vices, who arbitrarily and capriciously “target” black neighborhoods.

Not long ago, two negro ministers announced that they were suing Coca-Cola, alleging the company’s products kill more black people than the street violence routinely found in black areas. Their artfully crafted “sound bite” was that the black community loses more members “to sweets than to the streets.”

These two charlatans would have the public believe that sugary drinks are a greater cause of early death among blacks than a host of other variables, such as the fatty foods they crave, cigarettes, illegal drugs, poor dietary habits in general, ubiquitous alcohol consumption, violent crime and a sedentary life that comes courtesy of our Trillion-Dollar per year federal welfare system.

The unvarnished truth is that blacks are synonymous with violent crime, property crimes, welfare, illegitimacy and heroin and “crack” addiction. Yet, it is not the statues of Confederate Heroes who cause black gang-members to gun each other down in unprecedented numbers, nor does the Battle Flag cause them to opt for a life of drug addiction or drug-dealing.

Honoring Confederate Heroes such as General Robert E. Lee, Stonewall Jackson or Jefferson Davis does not cause them to procreate illegitimate and neglected children by the millions, nor do these heroes encourage black males to adopt a life of crime, just as many black females choose to adopt a life on welfare.

For 70 years, the lying left has told us that blacks and whites have the same intellectual abilities and aptitudes: Yet, the unprecedented opportunities created for blacks in the form of race quotas, the forced integration of schools, housing, and workplaces, the Voting Rights Act, federal welfare programs, and a thousand other misguided reforms have been an abject failure, and demonstrably so.

The left has created an angry, envious, surly, violent, criminal and dependent population in our large cities that is synonymous with violence, welfare, illegitimacy, crime and drug addiction. YET, THE ANIMUS OF THEIR “LEADERS” IS DIRECTED AT SOUTHERN HISTORICAL MEMORIALS!

Even if blacks and their allies were to succeed in destroying all public displays of Confederate Heritage, nothing would change in the black community. They would still lead the world in violent crime, property crimes, welfare, incompetence, illegitimacy and illiteracy.

Anyone who values the Constitution, Rule of Law, and the America we used to know needs to understand that this assault upon Confederate Heritage is THEIR FIGHT, TOO!

If blacks under the direction of their Cultural Marxist enablers succeed in purging symbols of Confederate Heritage from southern cities, these political grave robbers will be emboldened to the point that they will NEVER quit, nor will they ever be satisfied. They will merely refocus their destructive nature on icons honoring other American heroes.

There should be no question that Mount Vernon, The Alamo, Monticello, the Washington Monument, the Jefferson Memorial, and a thousand other cultural icons will soon be labeled “symbols of oppression” and the next targets of these political grave-robbers, unless they are stopped.

One thought on “Diversionary Tactics”