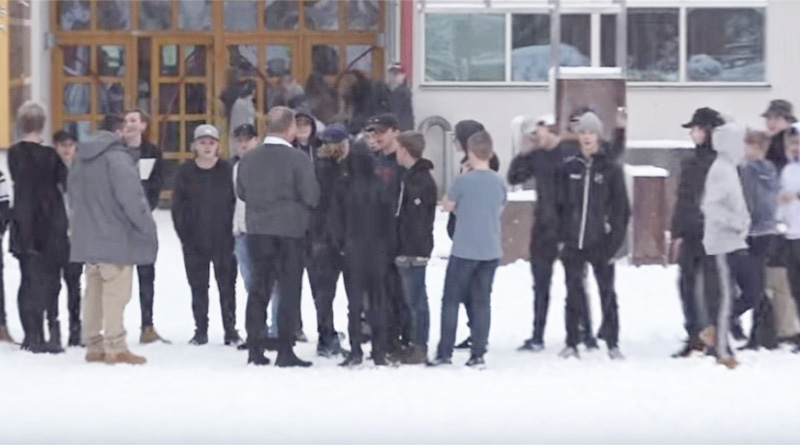 They call out the leftist cuck principal and cat ladies who enable it all.

The Nordic Resistance Movement really took it to the next level with their latest stunt.

This was an incredible action. It hit right in the feels.

Two weeks ago there was a scuffle between a Swedish teenager and an immigrant at the Lorensberg School in Ludvika. This led to the kebab calling his older brother, who then went to the school to beat up the Swede.

A teacher took the Swede into a room where they locked him in there, for his own safety. Other teachers at the school prevented the kebab from entering the school so he left.

On his way back home, the kebab met a group of 7th grade students so he just decided to beat one of them up. The kid couldn’t go to school for a couple of days because he needed to recover from his injuries.

Meanwhile, the principal has his priorities straight. He is now focusing on preventing this incident from leading to a spike in xenophobia.

In an e-mail, the principal Göran Törnqvist and vice principal Madelen Goldmann (pretty sure that name echoes) wrote that the school has employed a study coach and that a female employee will be there to “give hugs to all the students every morning five days a week.”

Seriously. This is what they believe the correct course of action is. Free hugs.

[Note: Unity is much stronger than Diversity!]

Nordic Resistance has previously interviewed a student from the Church School which is in the same city of Ludvika, with a population of 15,000. The student said that the school has experienced bomb threats, a knife incident which led to the school evacuating, several fights and sexual harassment.

Needless to say, this is all primarily coming from the non-Swedish students.

They come to the Lorensberg School and unfurl a banner that says: Swedish Youth – Hit back!. They then use a bullhorn, and green flare. The guy on the microphone then says:

Could you imagine that happening at your school? I mean, I know I did. To come back to the school with an army at my back to unleash righteous judgement on the Jewish administration, the cat lady teachers and the brown wannabe gangbangers would be oh so sweet.

A kid can dream, I suppose.

Adults tend to forget that little detail of growing up in a Multi-Kulti society. The White Tax extends to their children. Any White kid that has had to go to school with Vibrant Diversity has been a victim of racial bullying. Put simply, they develop faster than we do. By age 11, most of the Latino kids have a full handlebar mustache – and yes, I am talking about their girls here.

They also form gangs by age 12. And the White kids simply do not. They remain atomized and easy pickings in the hallways, bathrooms and cafeterias. Especially when they bring their older brothers and cousins into the fight. These “people” don’t fight fair. It’s them, their brother, their cousin against you. Lonely you.

No, nothing, it’s just funny how I immediately start thinking of prison when I remember the old public school days.

Worse, the teachers and administrators gas-light you and tell you that the problem is you. You provoked them. You need sensitivity lectures from the guidance counselor. You don’t have a right to self-defense. You’re the fucking White male here and don’t forget that Black history month is coming up, so study up on how much you suck!

A couple of kids then approach the Nordic guys, which triggers the fat, frumpy cat lady who gestures for them to come back to school, back under her wing and watchful shrew-gaze.

They small talk with students who basically say there’s problems at the school and they say that they’ve heard of the organization before.

The Principal and teachers all stand around nervously. The principal is the one in grey with the chronic cuckface who shakes his head angrily when the Nordic Resistance says that the kids need to band together and defend themselves.

In response, they decide that there is definitely going to be a school meeting to talk about the horrible nazis tomorrow.

And then, the stunning dismount.

The NRM tells the kids that everything the organization does, it does for them.

What a great way to get Generation Z on your side. You go straight to them and you tell them that you’ve got their back.

That’s a powerful message. Best of all, it teaches the kids that banding together with your fellow Whites is natural and the only way to reassert dominance at school and in the neighborhood.

Generation Z is ready for us. They’re ready for our message. All we have to do is meet them halfway.