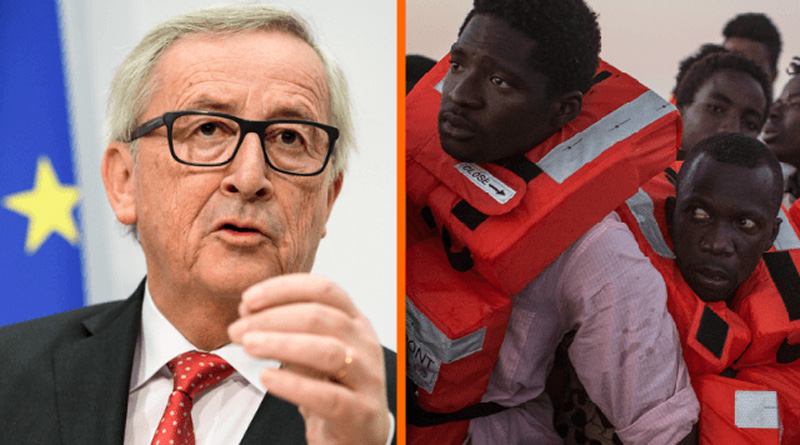 Brussels is opening legal pathways for migrants “who want to come” says European Commission chief Jean-Claude Juncker, declaring that Europe has a “clear need” for mass migration from Africa.

Speaking ahead of the EU-Africa summit this week, where leaders of EU and African nations will meet to discuss migration, he told Deusche Well that “if we don’t offer legal ways of emigrating to Europe, and immigrating within Europe, we will be lost.

“If those who come — who are, generally speaking, the poor and needy — are no longer able to enter the house of Europe through the front door, they’ll keep making their way in through the back windows.”

Claiming that the continent “will clearly need immigration in the coming decades”, he said EU nations “have to provide [Africans] who want to come, and are able to come, and whose situation makes it possible for them to come, with legal paths to get to Europe”.

Open borders to remain “inviolable principle” of the EU, no matter how bad the migrant crisis and terrorism become. https://t.co/jHNJLJRTs0

Asked by the German public broadcaster why there is “so much resistance” in Europe to the question of open borders with the third world, and why the EU has not yet “succeeded” in foisting mass immigration on countries across the continent, Juncker said Brussels has “told the member-states of their responsibility”.

“We will see what the member-states do about it,” he said, proclaiming mass immigration to be a “great challenge of our age” and hinting that countries in Europe will come around to taking the same view as the European Commission.

The former prime minister of Luxembourg denied DW’s suggestion that “fear is overcoming reason” with regards to mass migration, pointing to developments such as the EU Parliament’s recent adoption of changes to the bloc’s asylum system which would permanently force third world migrants upon unwilling nations.

“Now it’s up to the member-states to follow the path of wisdom,” said Juncker in the interview, where he cryptically hinted there are plans for Europe and Africa to become more interlinked.

“Africa is not a continent that will become part of our history tomorrow. Africa has always been a part of history,” he told interviewer Max Hofmann. “Certain Europeans just didn’t see it that way.”

Needs 6 million migrants… according to who? https://t.co/GjOK3Aoc5z

In the interview, Juncker did not expand on why Europe has a “clear need” for mass migration from the world’s poorest and most turbulent nations, but other EU figures have previously stated that the continent needs millions of third world migrants so as to combat an “ageing population”.

In making this calculation, it is unclear as to whether the European Commission has thought about the fact that migrants also get older, or the effect of an ever-expanding population on the continent’s emissions, or if it has considered the impact of automation — at a time when experts warn millions of jobs will be taken by robots in the coming years.

In addition, recent research from the Massachusetts Institute of Technology (MIT) found nothing to support the assertion that economies are harmed by ageing populations.

“There is no evidence of a negative relationship between ageing and GDP per capita,” academics wrote in a paper entitled ‘Secular Stagnation? The Effect of Aging on Economic Growth in the Age of Automation’.

“On the contrary, the relationship is significantly positive in many specifications,” it adds.

4 thoughts on “EU President: Without Millions of African Migrants, Europe Will Be Lost”