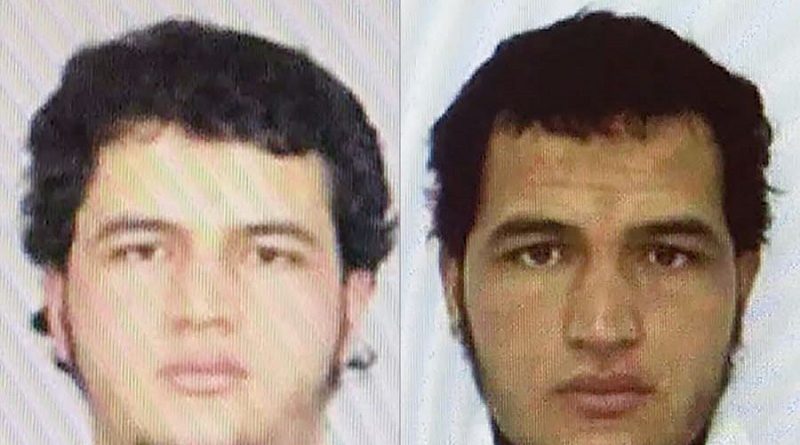 This is absolutely devastating to Angela Merkel. Sorry everyone, it wasn’t that Pakistani refugee we were holding after all. It was an entirely different Tunisian refugee who was arrested three times, who was denied asylum in Germany, who was scheduled to be deported and who was a known ISIS terrorist! Oops!

“A Tunisian asylum seeker suspected of carrying out the Berlin massacre was arrested three times this year amid fears he was planning a terror plot – but they let him go.

Despite being an ISIS supporter known to have received weapons training, German authorities allowed Anis Amri to slip through their clutches time after time.

The 23-year-old even tried to recruit an accomplice for a terror plot – and again the authorities knew about it – but still he remained at large, it has emerged. …

This afternoon it emerged that he had already been under investigation for planning a ‘serious act of violence against the state’ and counter-terrorism officials last exchanged information about him in November.

He arrived in Germany in July 2015 and was given a hearing by immigration authorities in April this year. He was denied the right to asylum and due to be deported before the end of the year.

But under a peculiarity of the German asylum system he was granted a ‘Duldung’ or toleration papers allowing him to stay for unknown reasons. …”

It was another known wolf. It was also likely one who was sustained on benefits from the German taxpayer and who availed himself of German women at the encouragement of Merkel’s government before driving that truck into the Berlin Christmas Market. Come have sex with our daughters and blow yourself up for Allah!

Did anyone else catch Rod Dreher’s post at The American Conservative on how “Rivers of Blood” literally came true in Berlin?

“Tourists saw a young child being crushed underneath the hijacked truck which ploughed through a Berlin Christmas market last night, killing 12 and wounding around 50.

Mike Fox and his partner were a ‘few metres’ from being run down by the lorry driven by a Pakistani asylum seeker Naved B, 23, who has only been in the country a few months.

‘There were children in the market. My girlfriend saw a child under the truck,’ Mr Fox said shortly after the attack near the Kaiser Wilhelm Memorial Church on Breitscheidplatz.

Witnesses saw bodies strewn across the a backdrop of colourful market stalls and Christmas lights as ‘rivers of blood’ flowed from the scene of the attack, which has again sent shockwaves of fear throughout Europe.

Angela Merkel is “shocked and very saddened” by all of this. She feels so bad about importing terrorists into Germany who gang rape women on New Year’s Eve and massacre children at Christmas markets that she is running for reelection next year.

“Mr Theis and his girlfriend Lara Colombo, 22, were on their way to the besieged market when they heard sirens and saw people running frantically from the scene.

He said: ‘It was carnage everywhere. There was blood all over the floor. There were people lying on the floor.

‘Nobody was really helping anybody. People were running. It was like every man for themselves. It was dusty and chaotic.

‘The biggest mental image I have is there were two rivers of blood going down the floor.”

While the Berlin Christmas Market Massacre was unfolding, The Daily Stormer is reporting that Merkel was at a nearby event giving a sermon that glorified refugees:

“GERMAN Chancellor Angela Merkel has cancelled a public appearance today and addressed the people of Germany but it can be revealed she was at a service honouring migrants when her own people lay dead in Berlin’s streets.

Mrs Merkel was attending an event to promote her failing migrant policy as a lorry was hijacked in Berlin.

I’m not sure that Merkel will survive this incident. I think she might even plunge to Hollande levels of public approval. This will have ramifications all over Europe.