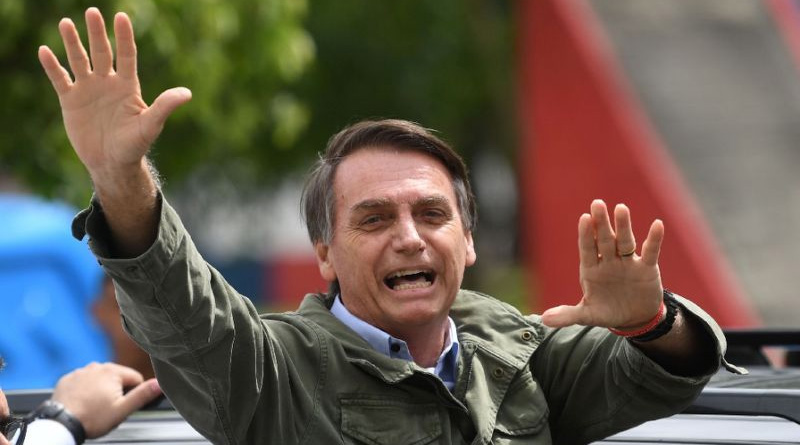 Supporters flooded the streets outside Bolsonaro’s home in Rio de Janeiro after the result was announced, waving Brazilian flags and lighting up the sky with fireworks.

Official results gave the controversial president-elect 55.18 percent of the vote with more than 99.7 percent of the ballots counted, as his vow to rescue the country from crisis with a firm grip resonated with voters furious over corruption, crime and economic malaise.

Bolsonaro, 63, will take office on January 1.

“We will change Brazil’s destiny together,” he said in his victory speech — broadcast live from his home on Facebook, the platform he has used to campaign since an attacker stabbed him in the stomach at a rally on September 6.

The longtime congressman pledged to govern “following the Bible and the constitution,” and said: “We cannot continue flirting with socialism, communism, populism and the extremism of the left.”

But he pledged to defend “the constitution, democracy and freedom,” fending off opponents’ warnings he would try to veer toward authoritarianism after openly expressing his admiration for Brazil’s brutal military dictatorship (1964-1985).

Despite repulsing many with his open support of the torture used by the military regime, as well as remarks deemed misogynist, racist and homophobic, Bolsonaro managed to tap into deep anti-establishment anger that propelled him to victory.

The sea of supporters outside his home celebrated ecstatically.

“All these people here are outraged, upset about corruption and crime, and we are with Bolsonaro. The people have spoken. For the first time I feel represented,” said Andre Luiz Lobo, 38, a businessman who — not incidentally, given accusations of racism against his candidate — is black.

On the other side, the reaction was despair — and a defiant vow to resist.

Haddad, a former Sao Paulo mayor, vowed he would fight to “defend the freedoms of those 45 million people” who voted for him. He demanded their rights be respected, after Bolsonaro vowed late in the campaign to “cleanse” Brazil of leftist “reds.”

Aides said Haddad, 55, had not called Bolsonaro to congratulate him.

“Fascists, you won’t get away with it!” shouted tearful supporters at the headquarters of Haddad’s Workers’ Party in Sao Paulo.

“I’m surprised Brazilians would vote for hate, for guns,” said Flavia Castelhanos, 31, after wiping away her tears, wearing a pin that said “Not him” — opponents’ rallying cry against Bolsonaro.

Political analysts and activists reacted to the news in grim tones.

“This is a dark day for Brazil; Brazilian democracy is now in complete crisis,” said Mark Weisbrot of the Center for Economic and Policy Research in Washington.

“We will join them in standing up against any attempt to erode the democratic rights and institutions that Brazil has painstakingly built in the last three decades,” said the organization’s Americas director, Jose Miguel Vivanco.

Bolsonaro has offended many in Brazil and beyond with his vitriolic remarks.

He once told a lawmaker he opposed that she “wasn’t worth raping;” he has said he would rather see his sons die than come out as gay; and he commented after visiting one black community that they “do nothing — they’re so useless I doubt they can procreate.”

But an even larger portion of voters reject Haddad and the tarnished legacy of his Workers’ Party.

The Latin American giant’s election came on the heels of its worst-ever recession, a staggering multi-billion-dollar corruption scandal and a year of record-setting violent crime.

Haddad stood as a surrogate for the popular — but imprisoned — ex-president Luiz Inacio Lula da Silva, who led Brazil through the boom years of 2003 to 2010, before both the country and his left-wing political project went bust.

The highly controversial Lula, who stands accused of masterminding the massive pilfering of state oil company Petrobras, is serving a 12-year sentence for bribery.

Lacking his mentor’s charisma, Haddad struggled to unite opposition to Bolsonaro, despite mounting fears over what the former army officer’s presidency would bring.

The election was decided as much by Brazilians voting against something as for it.

In Sao Paulo, the economic capital, Marcos Kotait, 40, a publicist, said he had “never seen such a polarized election” as he waited to cast his ballot.

“It used to be people would actually vote for what they wanted, and not just against something,” he said.