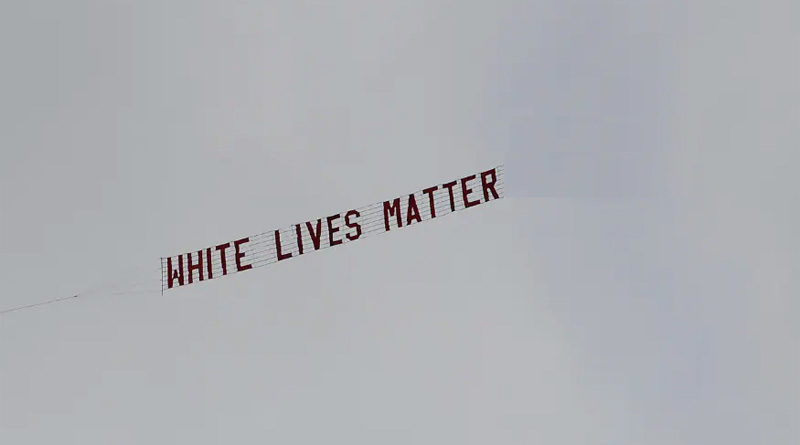 Ilana Mercer rips those who obfuscate by labeling animus as ‘identity politics’ or ‘Marxism’.

Institutionalized, systemic anti-whiteness, yoked to white-hot hatred of whites: That is the creed that is fast becoming entrenched across state and civil society in the U.S.

Chiseled down, these are also the building blocks of Critical Race Theory, a specious, sub-intelligent concoction, originated by sub-par intellectuals.

A further twist of the screw (or the shrew) was delivered recently by Vice President Kamala Harris, who insists on yammering about white America’s historic racism.

In practice, whites are being singled out for a punishing, institutionalized program of reeducation, subjugation and continued intimidation.

Dangerous in isolation, the entrenchment of anti-white animus is indisputable. It is made worse in combination with the conservative cognoscenti’s inability to come out with it. Too many conservatives euphemize our anti-white culture.

In particular, they will typically deflect from any anti-white outrage du jour by dubbing it identity politics: “Boohoo. Democrats are dividing us via identity politics.” This characterization is an obfuscation.

Here’s why: Blacks are not being pitted against Hispanics. Hispanics are not being sicced on Asians, and Ameri-Indians aren’t being urged to attack the groups just mentioned. Rather, they’re all piling on honky. Hence, anti-white politics or animus. The multicultural multitudes are gunning for whites and their putative privilege.

The tarring of whites is now close to becoming a curricular requirement in education (primary, secondary, tertiary), and from entertainment to technology, anti-white racial “redress” is the all-important object of industry.

When they are not lamenting Democrat-driven, divisive “identity politics,” conservatives will wax to you about Marxism and communism. The anti-white theoretical kudzu enervating every aspect of life is, apparently, just a manifestation of the radical left’s Marxism. Or, so you are told. This further downplays the anti-white project of the purveyors of Critical Race policy prescriptions.

Put it this way: If your first response to “Kill the Farmer, Kill the Boer,” chanted by South Africa’s murderous Julius Malema, is, “Marxism, identity politics” – you are going to come short in the survival department.

Incitement to kill in South Africa

In South Africa, inciters of black-on-white violence are known to rile the crowds with this anti-white chant. Born into “freedom,” after 1994, these haters can hardly read and write. Is a complex political theory, Marxism, then driving illiterates to slaughter whites in ways that beggar belief?

This is made-in-America suicidal nonsense on stilts!

The South African National Congress’s problem, however, is not communism; it’s white-hot hatred of whites.

This is not to say that endemic corruption, statism and state-capture by industry are not economic realities in South Africa. They are.

The definition of “state-capture” is “private actors subverting the state to steal public money.” In the U.S., private actors, Deep Tech, acting with state imprimatur, encroach on the rights of innocent civilians to make a living and partake in the national conversation. Potatoes, potahtoes.

In truth, the ANC guards the goose that lays the golden eggs. South Africa’s economy is not socialized, but is, rather, “based on private enterprise, [in which] the state participates” energetically. The economies of the West are at best Third-Way systems, too, neither free nor entirely state-controlled.

As an organizing principle, however, South Africa’s political, economic and social institutions are firmly anti-white. They imperil whites as a principle.

To sum, anti-white ideology is not to be conflated, as conservatives habitually do, with Marxist ideology. Very plainly, communism did not revolve around the exclusive blackening of whites. Stripped of bafflegab, this is Critical Race’s central project.

Confusing Americans about this anti-white atavism gripping the country does a disservice to the pigmentally canceled – those affected. For clear language and clear thinking mediate adaptive actions.

So, when conservatives insist that Critical-Race based politics in Congress and across corporate America are a manifestation of Marxism or identity politicking, it is more than a hollow exercise in intellectual casuistry: It prevents innocents (the pigmentally canceled) from acting adaptively to protect their lives, their futures and those of their progeny.

Crippled as they are by self-serving fear, conservatives have accepted the left’s terms of debate. Those dictate that, to warn of systemic hatred against browns and blacks is racially virtuous; but to fear the same for whites is incorrigibly racist.

For fear of being dubbed racists, media conservatives simply look the other way, refusing to acknowledge the unadulterated, anti-white hue of American society.

In using intellectual fig leaves to conceal anti-whitism, conservatives simply alight on similarities in the methods of current thugs and communism’s mass murderers. The anatomy of thuggery is always similar. The foot soldiers of communism, fascism and the American left are alike because the methods of thugs are alike, not because Critical Race policies and practices amount to communism.

Ultimately, if quibbling about communism and identity politics becomes an obstacle to facing the reality of systemic anti-whiteness – then these theoretical crutches are an affront to reality and, by default, a grave error.

Ilana Mercer has been writing a weekly, paleolibertarian column since 1999. She’s the author of “Into the Cannibal’s Pot: Lessons for America From Post-Apartheid South Africa” (2011) and “The Trump Revolution: The Donald’s Creative Destruction Deconstructed” (June, 2016). She’s currently on Parler, Gab, YouTube and LinkedIn, but has been banned by Facebook and throttled by Twitter.