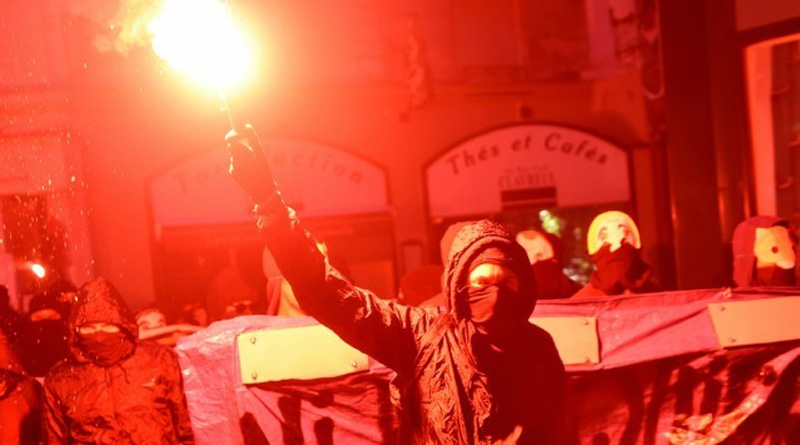 The French Senate has adopted a new bill to curb violence from far-left extremists that could see fines of up to 15,000 euros and potential prison time for masked “black bloc” rioters.

The new bill was adopted by the Senate on Tuesday and specifically targets members of Antifa black bloc groups which often show up to protests to cause property damage and violence against political opponents and police, reports FranceInfo.

Willful concealment of protestors’ faces will now carry a proposed 15,000 euro fine and a prison sentence of up to one year. The bill also allows for authorities to ban individuals deemed harmful to the public good from protests entirely.

The new bill was proposed by the conservative Republicans but was rejected and voted against by the Communists, the Socialist party, and French President Emmanuel Macron’s Le Republique En Marche! (LREM).

Left-extremist violence has seen a dramatic rise in recent years in France, especially during protests like those against populist politician Marine Le Pen last year during the French presidential election.

The Antifa extremists involved in the protests, which often become riots, have smashed up shops in central Paris, assaulted police officers, and even attempted to set them on fire in some cases with improvised incendiary weapons.

France is not the only country to have problems with Antifa violence during protests. Last year the German city of Hamburg saw rioting during the G20 summit where shops were smashed, cars set on fire, and hundreds of police were injured.

Following the riots, the German government shut down the major Antifa website Linksunten and has arrested several extremists in connection with the violence.