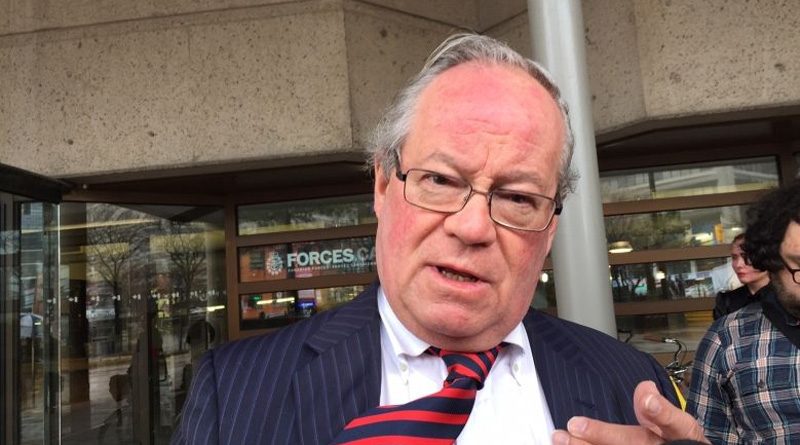 A Canadian nationalist, Paul Fromm, has been granted the right to intervene in a human rights case involving flyers that targeted a transgender candidate in the B.C. election.

Morgane Oger, the defeated NDP candidate for Vancouver-False Creek, filed a complaint against Bill Whatcott after he distributed handouts accusing her and her party of “promoting a false narrative” — specifically, that she is a woman.

In a decision Friday, the B.C. Human Rights Tribunal granted intervener status to Paul Fromm, arguing on behalf of the Canadian Association for Free Expression (CAFE). Fromm is a self-described white nationalist and the director of CAFE, a non-profit that has intervened in several human rights cases across Canada involving, for example, Holocaust deniers and homophobic websites.

Oger told CBC News that she was disappointed by the decision.

“I feel that it’s regrettable,” she said. “I am tired a little bit of people thinking that just because they hate someone…they can just negate their existence. It’s time that this ends, and CAFE is going to try to keep this going instead of putting an end to what to me is an open-and-shut case.”

Fromm had argued that CAFE’s presence was necessary during proceedings because Whatcott could not afford a lawyer.

And tribunal member Walter Rilkoff agreed, but only to an extent.

“Given CAFE’s extensive participation in other fora in Canada, I have decided that its submissions may be of assistance but only for the purpose of making written and oral submissions,” Rilkoff wrote in his decision.

Fromm will not be allowed to cross-examine any witnesses, and will have to file applications to call witnesses of his own.

A history of extremism

Like Fromm, the man at the centre of the complaint also has a long history of promoting extremist views.

Whatcott was the subject of a landmark 2013 ruling from the Supreme Court of Canada upholding the country’s hate speech laws, and is currently facing a $103-million class action lawsuit over graphic anti-gay flyers distributed during last year’s Toronto Pride parade.

The flyers he distributed in Yaletown this spring used graphic and derogatory language, and expressed “concern about the promotion and growth of homosexuality and transvestitism in British Columbia and how it is obscuring the immutable truth about our God-given gender.”

Oger remembers learning about the flyers during a debate with her Liberal opponent, Sam Sullivan.

“My initial reaction was devastation. It was like, oh God, how horrible. My fear was, what are people going to think? Is this going to actually affect people?” she said.

Friends, family and members of the community rallied around her, Oger said, but she was still worried about her safety.

“I was concerned that his language could actually cause others to act in a more violent way,” she said.

The complaint alleges discrimination on the basis of gender identity, language that was only added to the B.C. Human Rights Code last year, thanks in part to Oger’s advocacy.

Meanwhile, Friday’s tribunal decision reveals that Fromm wasn’t the only person applying to intervene in the case.

A Vancouver Island man named Gordon Watson, who described himself as “Justice Critic for the Party of Citizens Who Have Decided to Think for Ourselves and Be Our Own Politicians,” also asked for intervener status.

In all, Watson submitted 13 single-spaced pages to the tribunal, covering topics ranging from homosexuality to raw milk to the Harmonized Sales Tax. He wanted to argue, among other things, “that some of the judges on the Supreme Court of Canada were illegally appointed,” according to Rilkoff.

The tribunal did not accept his application.