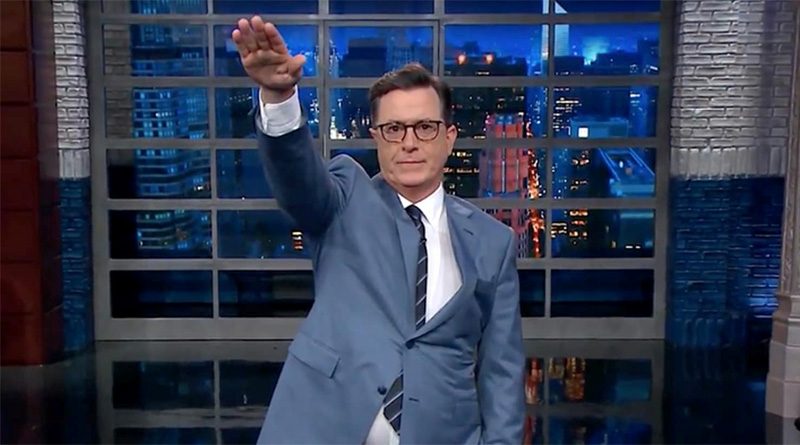 The ‘Late Show’ pig host had thrown some stinging barbs the president’s — and Steve Bannon’s — way on Thursday. But none more controversial than this. He should be fired or forced to apologize.

“On Thursday night’s edition of The Late Show, comedian Stephen Colbert decided it would be a good idea to throw multiple Nazi salutes.

Colbert was making a joke about President Donald Trump’s response to the riots in Charlottesville when he threw Nazi salutes in a couple of different directions.

“[Trump] is definitely taking it to a higher level, I’d say his support is about up there,” Colbert said as he made the salute. “Right about here.”

“Or over here,” he said, making another Nazi salute with his left arm.

CNN fired Trump supporter Jeffrey Lord for something similar–mockingly tweeting “Sieg Heil!” to Angelo Carusone, the president of Media Matters. Lord said he used the Nazi slogan to indicate that he found Carusone’s behavior to be fascistic, while Colbert seemed to use the Nazi salute to argue that Trump is sympathetic to Nazis.”

One thought on “Big Tech Censors The Internet: Steve Colbert’s “Nazi Salute” Gets a Pass”