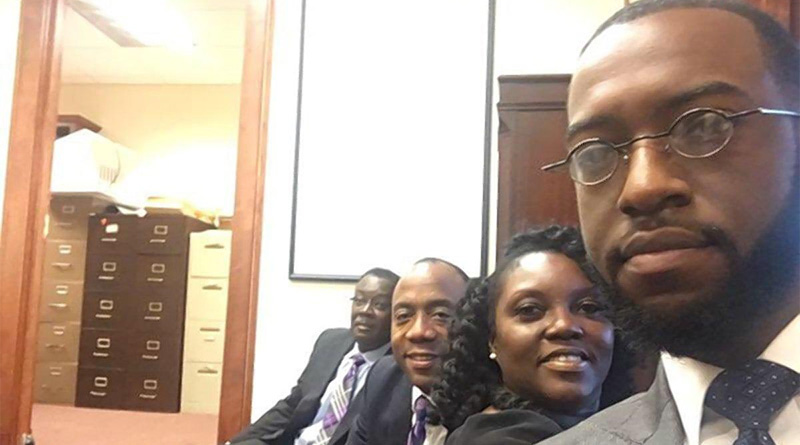 NAACP demonstrators were arrested after occupying the Mobile office of Alabama Sen. Jeff Sessions, calling for him to turn down his controversial nomination to become the next U.S. Attorney General.

More than a dozen protesters entered the office around 11:30 a.m. Tuesday, Benard Simelton, president of the Alabama State Conference of the NAACP, told the Daily News from Sessions’ office.

NAACP President Cornell William Brooks was among those sitting in Sessions’ office, and said at 7:30 p.m. that he and his fellow protesters were about to be arrested after the building manager requested that they leave.

A reporter for Mobile’s Lagniappe newspaper confirmed that arrests were occurring and a livestream from the NAACP showed multiple protesters being put in zip tie handcuffs.

The organization said on Twitter that Brooks and National Youth & College Director Stephen Green had been arrested.

Mobile police did not immediately respond to a request for comment about the arrests.

President-elect Donald Trump has tapped Sessions, 70, to be his Attorney General — a move that drew immediate rebukes for Sessions’ history of opposing civil rights causes.

Sessions lost a nomination from President Ronald Reagan to become a federal judge after accusations that he had made racist remarks.

An African-American former colleague said Sessions called civil rights groups, including the NAACP, “un-American” and “communist inspired,” but said he was “OK” with the Ku Klux Klan until he learned that some members smoked marijuana. Sessions denied the damning accusations.

Since then, Sessions has earned a reputation as one of the staunchest conservatives in the Senate. He has opposed Obamacare, marijuana legalization, the repeal of Don’t Ask, Don’t Tell, and all three of President Obama’s Supreme Court nominees.

“It’s not only about how America fares,” Simelton told The News the protest against Sessions.

“It’s about how other countries will look to us on human and civil rights.”

Rev. Jesse Jackson took to social media in support of the protesters.

“We support the @NAACP and share their outrage & direct action over the nomination of Sessions,” the 75-year-old civil rights activist captioned a Twitter photo of Simelton and his fellow protesters camping out in Sessions’ office.

The sit-in was one of several Sessions protests the NAACP organized around Alabama on Tuesday, one week before he faces a Senate confirmation hearing for his new post on Jan. 10.

Birmingham NAACP head Hezekiah Jackson lead a demonstration there after a press conference where he said the group had no faith in Sessions.

“We have found no evidence of his ability, past or present, to be impartial and unbiased as the chief law enforcement officer of the United States of America, especially in the areas of civil rights, voting rights and equal protection under the law,” Jackson said.

Sessions was not in his Mobile office. Reps there refused to answer questions and referred The News to Sessions’ Washington, D.C. office, which did not answer calls.

Sen. Dianne Feinstein (D-Calif.) said Sessions’ hearing should be delayed because the senator submitted more than 150,000 pages of material for review, but appeared to put it together “in haste” and still left his file “incomplete.”