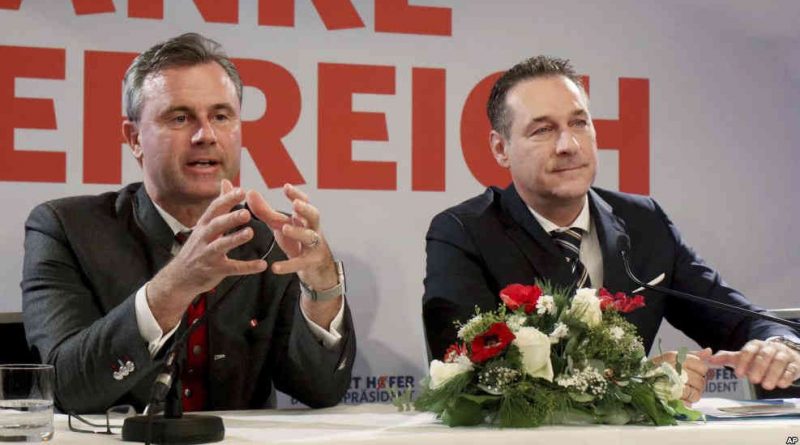 Needless to say, we are pleased by this:

“BERLIN — The leader of the Austrian far-right Freedom Party has signed what he called a cooperation agreement with Russia’s ruling party and recently met with Lt. Gen. Michael T. Flynn, the designated national security adviser to President-elect Donald J. Trump of the United States.

Word of the agreement with Russia was the latest sign that the Kremlin is forging bonds with political parties across Europe in what some European leaders suspect is a coordinated attempt to meddle in their affairs and potentially weaken Western democracies. Many of these efforts are murky and involve obscure groups, and it is unclear whether President Vladimir V. Putin of Russia has any direct involvement.

The Freedom Party leader, Heinz-Christian Strache, reported the signing of the agreement with United Russia, Mr. Putin’s party, on Monday on his Facebook page, where he also disclosed that he had visited General Flynn a few weeks ago in Trump Tower in New York. …”

Pyotr Tolstoy, deputy speaker of the Duma, or lower house of Russian Parliament, said there was a need for open dialogue to improve ties with parties across Europe, United Russia reported from the signing of the agreement. This was especially important, Mr. Tolstoy was quoted as saying, “in today’s politically correct world, when everyone is hiding their real thoughts and feelings.”

Jamelle Bouie is crying about it over at Slate. Lawrence had a panel on his MSNBC show tonight wailing about the New Axis which is taking shape.

The Alt-Right is post-liberal. It envisions a world order in which all European nations are finally at peace. Ultimately, the ties that really matter are racial and cultural. We don’t want any further disastrous wars like we had in the 19th and 20th centuries. Unlike the American liberals, we only seek peace and friendship with Russia.

Angela Merkel is the real enemy in Europe. We don’t consider the German people our enemy though. Merkel is our enemy because she is the enemy of the German people – a Volksverräter. Merkel’s government is a tyranny that oppresses German nationalists and patriots. She demonizes the German people, denigrates and dismantles their culture, and supports their replacement through Third World immigration.

1.) The liberation of Western Europe which involves taking down the existing liberal order by bringing to power populist nationalist parties across the Continent.

2.) We want these populist nationalist parties to act to secure the future of the Europe whether it is through ending refugee resettlement, deporting immigrants, dismantling political correctness, ending multiculturalism, ending mass immigration or building border walls, which countries like Hungary have already done.

This is a great war against liberalism to secure the Occident – the traditional living space of people of European ancestry all over the world – in the 21st century. We are defending our common civilization from an internal and external existential threat. That’s what connects the Trump Wall with Mexico to overtures to Russia.

This isn’t remotely the same thing as 19th century European imperialism (dominating the non-Occidental World) or 20th century fascism (a period of extreme strife within the Occident between European nations). The correct historical parallels are responding to the common threat posed by the Mongols, the Turks or the Caliphate while simultaneously having to deal with a great spiritual and cultural crisis that is internal to Christendom.

So far, there is a lot to be optimistic about on the foreign policy front.